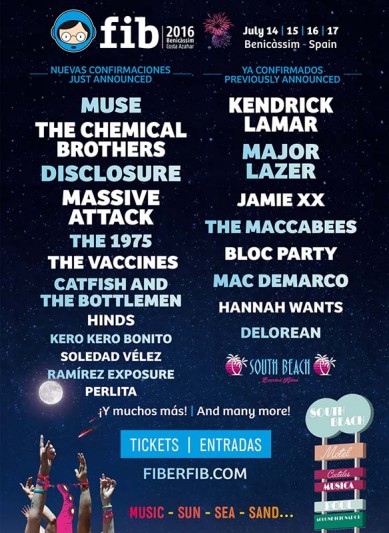 After nearly two months without news of FIB, the organisation has announced today an incredible batch of names that join a line-up that already include Kendrick Lamar, Major Lazer or Jamie XX. British Muse are the great name for the edition of this year, where they will perform an “exclusive new show for the festival”, but big names not finished here due to the organisers have also confirmed The Chemical Brothers, Massive Attack, Disclosure or The Vaccines. The remaining names confirmed are The 1975, Catfish and the Bottlemen, Hinds, Soledad Vélez, Kero Kero Bonito and Perlita.

Tickets for the festival, which is held in Benicassim from 14th to 17th July, can be bought at the official Website of the festival with a starting price of 147.50€ (+ fees) for the 4-days ticket with camping included.