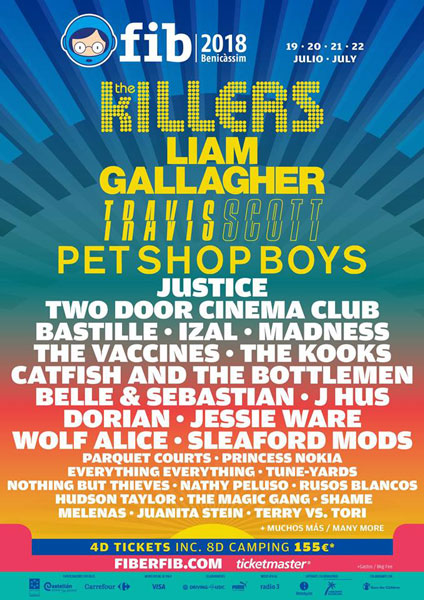 One of the most wellknown festivals in Spain, Benicàssim Festival, continue announcing headliners for its next edition. If we already knew about The Killers or Liam Gallagher, now we have a British electronics classic like Pet Shop Boys. The duo formed by Neil Tennant and Chris Lowe, who also played last summer in Spain at Cruilla Barcelona 2017, will turn the FIB venue upside down with hits like "Always On My Mind" or "It's A Sin".
In this new round of confirmations, stand out names such as Belle And Sebastian, The Kooks, Madness, Sleaford Mods, Jessie Ware and Justice, one of the most influential electronic duos of the last decade that will surely not leave anyone indifferent. This new cbatch also includes Princess Nokia, Parquet Courts, J Hus, Nathy Peluso, Juanita Stein, Hudson Taylor, The Magic Gang and Terry vs. Tori, while the Spanish presence increases with the names of Dorian and Izal, both with new albums that will be premiere soon.

4 days tickets for the festival, which will be held from the 19th to the 22nd of July at the usual location in Benicassim , are on sale at the official webiste of the festival with a price of €155 + fees (including campsite).