Last Sunday at midnight, the twenty-fourth edition of the Benicassim Festival came to an end. The night was closed with a spectacular concert by Justice that during ninety minutes catch the audience of the festival thanks to an amazing scenario full of lights. If we must highlight something of this year at FIB, it has been the great variety of musical styles and the architecture of the organization to have a good cohesion between different styles as Trap, Indie or British Pop. FIB always show new talents, more and less consecrated groups distancing themselves from the traditional line of other events to complete an attractive line up.

On Thursday the festival opened its doors, and thousands of fibers went crazy into the venue to enjoy the concerts of the day. At FIB CLUB stage, we were able to attend the concerts of Polock or Terry vs Tori… Spanish bands with a great live show that both foreigners and Spaniards could enjoy. In this stage the majority of bands that act were Spanish, emerging and also some more veterans that despite the hours of performance that coincide with headliners, usually have a good audience. The number of duos that have gone through the FIB, such as Sofi Tukker, Tune Yards, Her's, Julia or Desert or is very striking. Less is more is the slogan of bands like that, capable of driving the audience crazy with the beat of guitars and drum machines Roland T-808. This year, one of the Spanish highlights was Izal, which, even coinciding with Travis Scott, gathered on the Visa stage a whole army of fans who knew every syllable of their latest work Autoterapia (2018) and of course the rest of their hits. 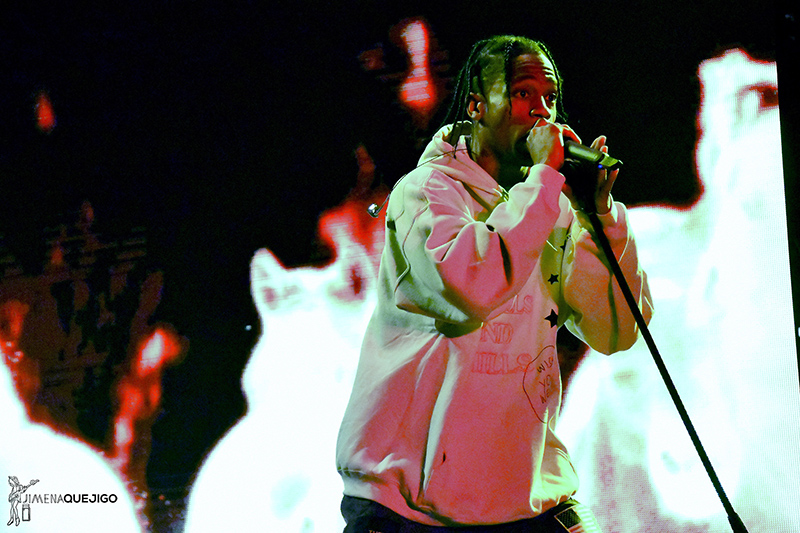 Other concerts of the day were those of Two Door Cinema Club and Everything Everything. Over the years and success have not made a mark in these formations, which continue to offer new highly competent albums such as A Fever Dream (2017) of E/E or the already distant Gameshow (2016) of TDCC. Bands that are safe bet that also have an unblemished live. The big claim of the night was Travis Scott, with his dark, powerful style and that is halfway between the underground and the massively commercial. A great success that the FIB has not overlooked to bring it from Los Angeles to Benicassim. His presence on stage is incredible, with a show that offers smoke guns, fire, screens in which we can see different perspectives of the videos he projects and of which Travis is wrapped to dispatch his energy and infect the thousands of attendees that paid homage to him. It is worth mentioning big Travis's moment when he throws himself to the audience and his ability to continue singing without being harm among so many masses gathered there. The Trap is a social movement and it is here to stay forever.

Friday began recovering one of the traditions of the festival, his charity soccer match. Artists against the press, a tradition that was retaken for the causes of NGOs Save the children and Red Cross. Among the artists there were some VIPs and several members of The Vaccines and among the press team highlighted the coach, Julio Ruiz, one of the main voices of Spanish Radio 3. 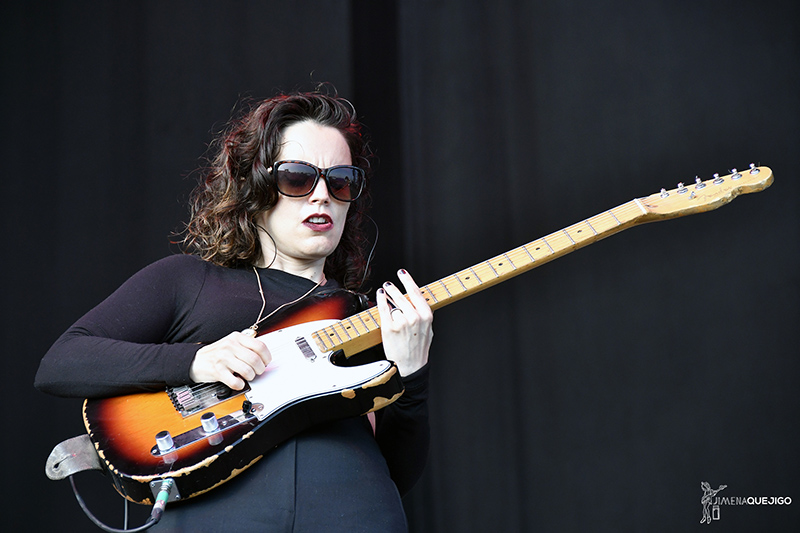 The first concert we had was that of Anna Calvi, who has more than enough class and apprenticeship to give a resolute and visceral concert. They also highlighted other Spanish bands such as Tulsa, band closely linked to the festival since its inception, Juanita Stein who offered her exciting live show and other names such as Rural Zombies, Júlia, Joana Serrat or Desert that delighted with their alternative proposals. C.Tangana with a show that included even acrobats, contaminated the entire FIB with his self-confidence and not only gathered the Spanish audience, even also infected a few thousand foreigner who were carried away by his Latin Trap. 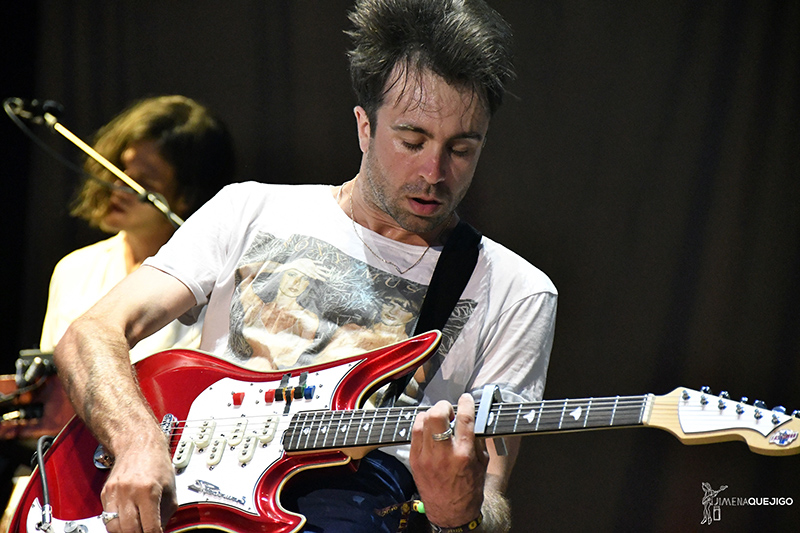 The night also had clear names of big relevance as The Vaccines that gave everything away and released a live show offering the audience what they expected, danceable hits like "If you Wanna" or "Post-Break up Sex" while presenting themes of their new album Combat Sports (2018). On the other hand, The Charlatans gathered the most nostalgic of the festival and that is that they drag a race of hits from the 90s to which any Brit Pop fan would not fail. They filled the Visa scenario to perform both their recent EP Totally Eclipsing (2018) and hits such as "The Only One I Know" or "One to Another". A few meters away from them were their compatriots Sleaford Mods, or what is the same, the duo formed by Jason Williamson and Simon Parfrement that over the years have shown us that they are pure attitude. They are the most perfect minimalist simplification of any British Music essence thanks to base beat and a vocal personality that we love. 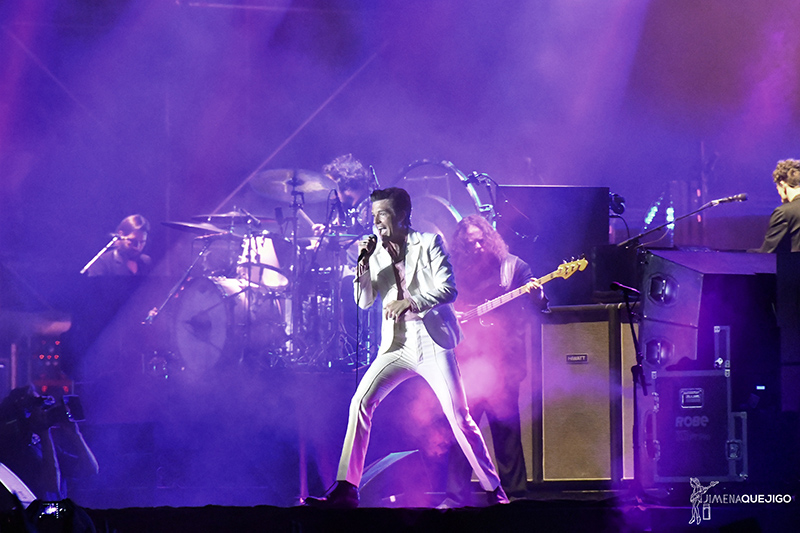 One of the most anticipated bands of this edition were The Killers or as Brandon Flowers said at the beginning of his concert "Somos los asesinos". They have it all, great songs, attitude and a lot of Rock and Roll. The public was very excited to see them live and Las Vegas band gave a good shoot of energy and electricity, reviewing their entire career of hits and of course their latest album Wonderful Wonderful (2017). They even raised a fan (Gonzalo) to invite him to play drums in "For Reasons Unknown", which by the way left the staff with their mouths open. With new members in the formation due to the reject of playing live of Mark Stoermer and Dave Keuning, The Killers solved the test with A+ mark. Other concerts that were very well received were those of Catfish and the Bottlemen, Cuchillo de fuego, Bob Moses and the guitarists The Snuts.

On Saturday, the concerts of Junior Mackenzine, Agost, Fario, Rusos Blancos and Ventury opened the day, bringing the emerging Spanish touch. A little later it would be the turn of Toundra, a Madrid quartet that showed in Benicassim all their potential and its most effective weapon, its live show. With their new album Vortex (2018) launched some months ago, the sound of the band is like a real steamroller that shows the years they have together and why they are one of the best bands on the Spanish scene. Then it would be the turn of Los Punsetes, that maintained the level, since the hieratic personality of their singer captivates you so that later the rest of the band surrounds you with base of catchy hits like "Mabuse" or "¡Viva!". Fast, concise and direct. 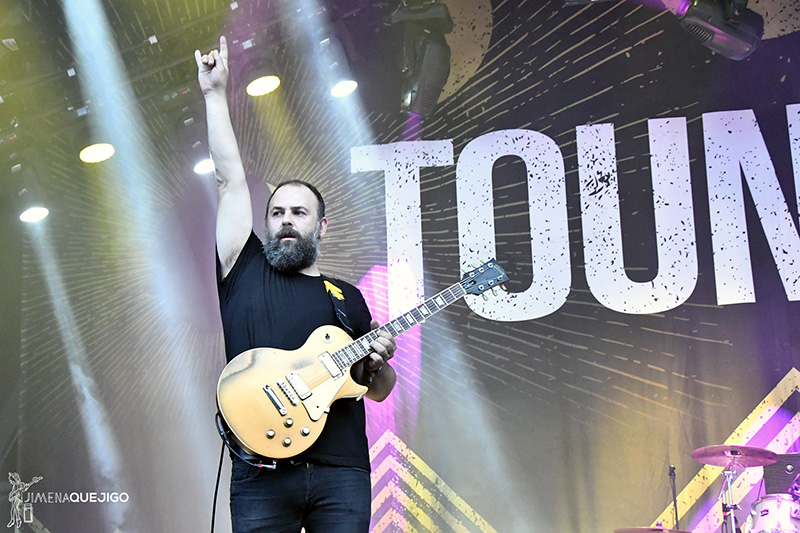 The Horrors were another of the most striking attractions and from our point of view, their show was one of the best of the festival. Everyone known its extensive and evolutionary career, which goes from its wildest beginnings with Strange House (2007) to the most recent V (2017) without overlooking the masterpiece Primary Colors (2009) from which they continue to rescue themes live. With them, you let yourself be carried away by the sound vortex that emanates and you get trapped with your light show of stroboscopies and smoke, something that do not facilitate their work to the photographers, but maybe they only want to be listened as it was shown when their singer decided to let them down and turn off the screens on each side of the stage. The only bad thing is that only 50 minutes are not enough for their entire proposal. 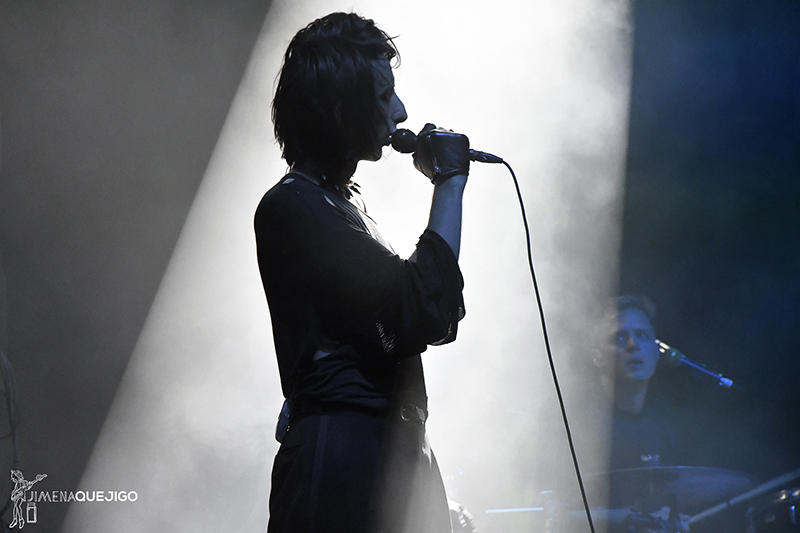 The final touch of Saturday came from Pet Shop Boys. In the first two minutes they have the audience of the festival in their pockets as their eighties techno was a dart to the heart. Neil Francis and Christopher Sean kept us to the limit until dawn, as the British duo did not leave any of their hits on the road and the audience was very satisfied. The rest of the day was completed with great concerts by bands like Belle & Sebastian, The Kooks, Monarchy and Metronomy. Of course, the daily touch of Trap was in the hands of Turno, one of the best exponents in Spain of the new scene.

On Sunday, FIB line up, despite being overshadowed by Liam Gallagher, accumulated a large amount of Spanish bands presence. Formations such as Kitai, Alma, Favx, North State, the Mexicans Zoé and The Parrots gave good concerts and the fact that they are at the festival denotes the interest that the organization has in offering the opportunity to play in very good conditions and before a large audience. Other veterans of the FIB like Dorian deserve special mention. Justicia Universal (2018) is their new album and we could check the good condition of the band because their live is still captivating. 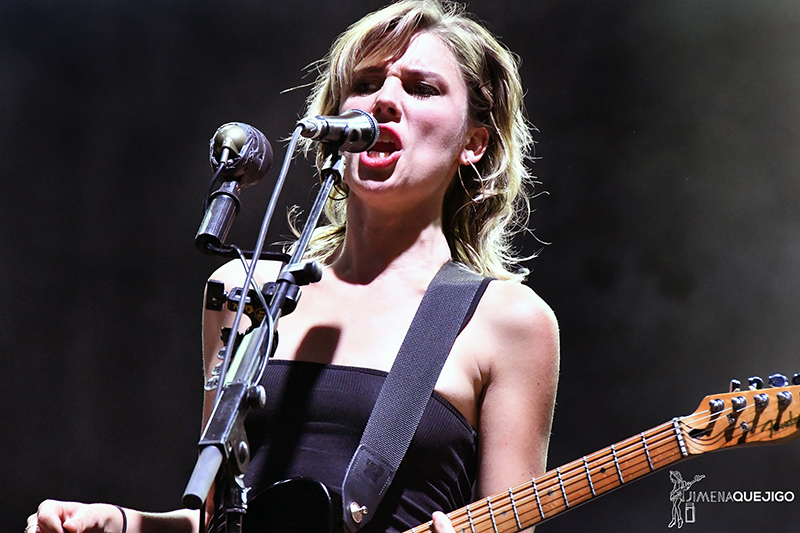 Bastille is one of this bands that you must be focus on them during the whole concert, their complicity is absolute and they interact with the public by contaminating them with their synthetic and catchy pop, highlighting the good sound of the concert. Wolf Alice offered their velvety shoegaze with amazing skill. They play several styles but they are very linked to the current British post-punk of the 80s although somewhat renewed. Their concert focused mainly on their latest LP Visions Of a Life (2017). We could not ignore the performance of King Khan and the Shrines that with their psychedelic garage caused the best pogos of the festival. Nor to Hudson Taylor, Irish duo formed by the brothers Harry and Alfie. It seems that their first LP will bring us so much to talk about. It was one of those surprises that you did not expect and we found in the last day of the FIB with their incredible concert. 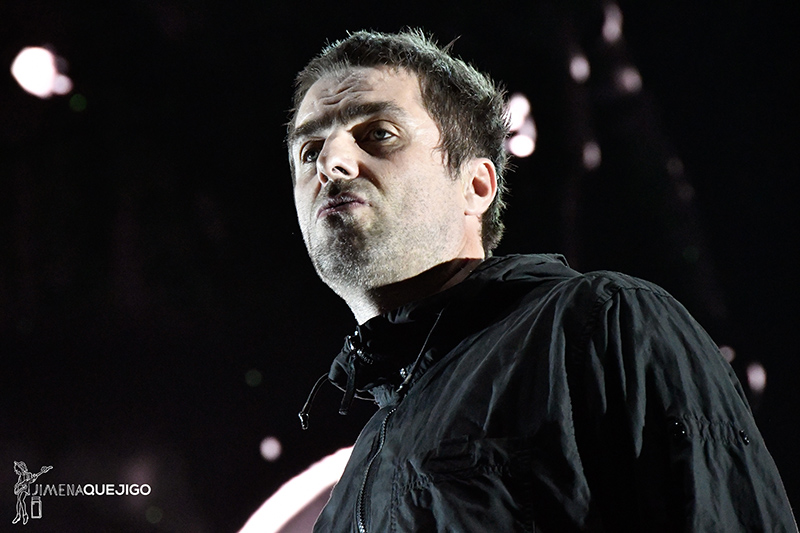 Liam Gallagher returned to the FIB after his show last year, but this time as headliner, and that could not be less given the great success of his first solo album As You Where (2017) which enjoys an impeccable production and relaunches the race of the youngest of the Gallagher. Liam jumped on stage with the clear intention of showing who the boss is. "Rock and Roll Star" was the one in charge of unleashing the madness on the stage of Las Palmas. He is the voice of a whole generation and that is that his energy captures all the attention of the audience. The band performs phenomenally the songs of Oasis and those of their new album. It offered to the public a concert full of Oasis successes and of course its new singles "Wall of Glass", "For What is Whorth" or "I'Ve All I Need" among others. The most moving point was "Live Forever", the theme with which he concluded his concert and it was inevitable to think about the eternal question. Will the big O come back one day? 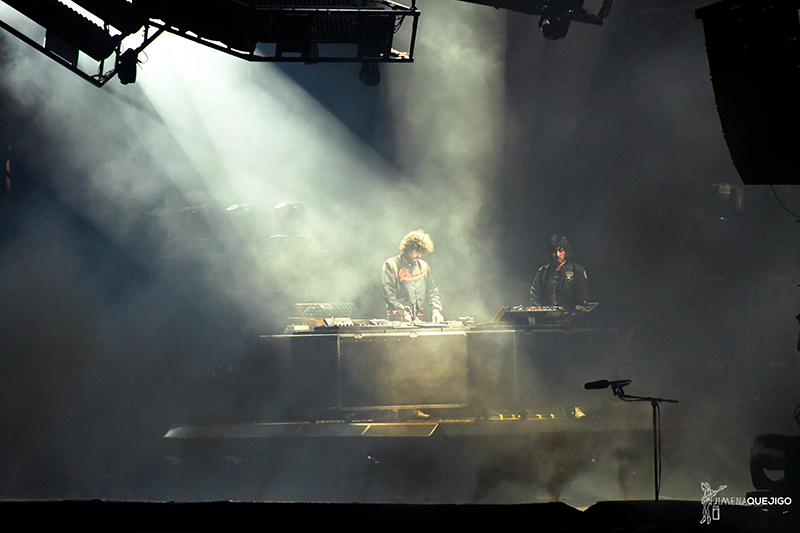 As we said at the beginning, Justice was the closing band to this edition of the festival, and overlapped with them, Julio Ruiz alias Dj Rojiblanco kept the audience until almost dawn, playing songs one after another dressed in his already more than known Atlético del Madrid jersey.