Yesterday afternoon, as a central part of the process of presenting the Radio Primavera Sound project, the organisers of the Catalan festival presented the long-awaited lineup for Primavera Sound 2019. The main novelty of what will be the nineteenth edition of the Barcelona festival is a line-up in which there are more female than male artists (At last!) whose motto is the hashtag #TheNewNormal in which the rise of urban and Latin music have a greater protagonism than in previous years by the hand of Solange, Cardi B, J Balvin, Janelle Monáe, NAS, Future, Kate Tempest or the local sensation Rosalia. Also, we can find other usual styles with the likes of Eryka Badu, Tame Impala, Interpol, Suede, Big Red Machine (Justin Vernon aka Bon Iver and Aaron Dessner from The National) or Primal Scream.

In addition to the great names recognized by the general public, this edition of the festival will feature artists such as Stereolab, Jarvis Cocker, Jungle, FKA Twigs, Kurt Vile & The Violators, Low, Christine and The Queens, Neneh Cherry, Róisín Murphy, Robyn, Mac DeMarco, Courtney Barnett, Guided By Voices, Built To Spill, Deerhunter or the death metal of the British Carcass, among many others. Among the most surprising proposals we find the funk of the Brazilian Linn da Quebrada, the traditional Cuban music of Daymé Arocena, The Mystery of the Bulgarian Voices with Lisa Gerrard of Dead Can Dance, the drum show of Sons of Kemet XL or the trumpet of the octogenarian Jon Hassell. On the other hand, the already consolidated electronic proposal of the Primavera Bits festival will have Richie Hawtin as the great name this year, who together with Nina Kravitz, James Blake, Apparat, Modeselektor, Helena Hauff, Mura Masa, Yves Tumor, SOPHIE or David August will be in charge of offering danceable rhythms until dawn.

Primavera Sound 2019 will be held between 30 May and 1 June 2019 in Barcelona, with most of its programme taking place at Parc del Fòrum. Season tickets for the Barcelona festival are already on sale through Portal Primavera Website or Ticketmaster at a promotional price of €180, while daily tickets cost €80, in both cases plus fees. 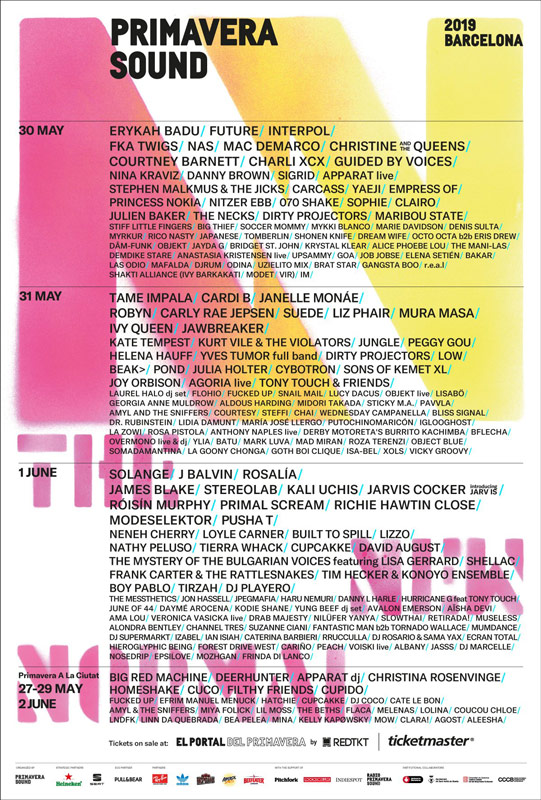