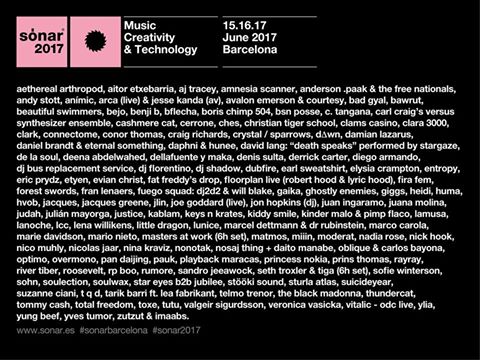 A month after announcing the big group of names for its lineup, Spanish festival Sónar 2017 has announced 10 last names with which it close the lineup. The main newness will be a 6-hour session of the historic duo Masters At Work formed by Louie Vega and Kenny Dope on Friday night, but also include names like Derrick Carter, American house classic, Yves Tumor, the trap of the Icelandic Sturla Atlas, Kablam, Toxe, Juan Ingaramo or the duo Zutzut & Imaabs.

So Sónar 2017 will feature more than 140 performances distributed in 9 stages, with great names like Justice, Soulwax, DJ Shadow, Nicolas Jaar, Moderat, De La Soul, Anderson .Paak or Arca & Jesse Kanda, among many others. We remind you that the tickets for the festival, which will take place from 15 to 17 June in Barcelona, are now on sale at a price of €180+fees for the full ticket, €270+fees for the VIP ticket and €125+fees the ticket that includes two nights, in a promotional campaign that will end next May 11.