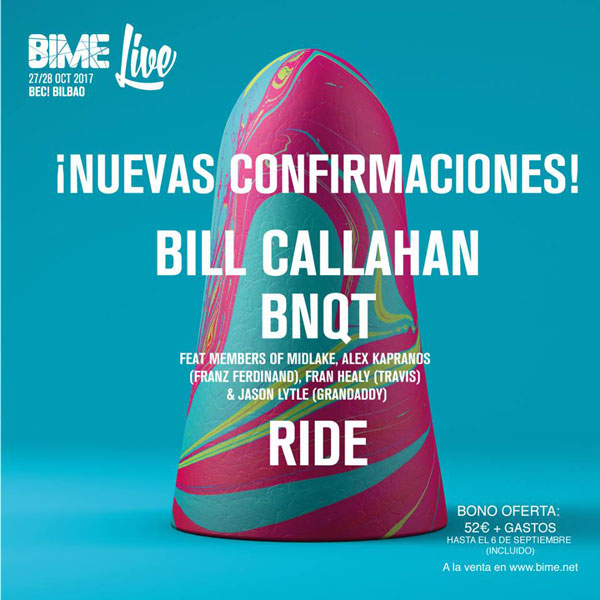 Basque festival BIME Live 2017, which will be held on 27 and 28 October at BEC in Baracaldo, has just announced a second round of names for its lineup. The big name of this new band is the supergroup BNQT, band formed by Ben Bridwell (Band Of Horses), Alex Kapranos (Franz Ferdinand), Fran Healy (Travis), Eric Pulido (Midlake) and Jason Lytle (Grandaddy) that will show their debut Volume 1 (2017), while the rest of confirmations are the British Ride, who will also present their first album in 21 years Weather Diaries (2017) and the American singer-songwriter Bill Callahan Bill Callahan. These names joins The Prodigy, Einstürzende Neubauten, Exquirla, Vitalic or Kiasmos, among others, confirmed previously.

In addition, today has also announced the complete lineup of Gaua, the electronic side of the festival, which will feature Jackmaster, Mano Le Tough, Joy Orbison, Leon Vynehall, Willow y El_Txef_A.

We remind you that two days tickets are available on the official website of the festival with a promotional price of €52 + fees up to next 6 of September.