Festival Internacional de Benicassim, that this year became 20, has finally confirmed first names for its line-up. After the doubt that appeared due to the issues on last years, the main festival in Spain will celebrate its 20th anniversary with 4 days of gigs, who will be held from 17th to 20th of July in the usual site of the last years in the city of Benicassim. 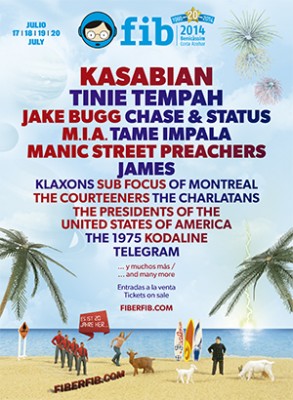 In a round full of intrenational names, we can found Kasabian as a big name. Leicester's band will be on Valencian city presenting their expected 5th album, first without guitar player Jay Mehler, that will be on stores next July. Por the other part,  bunch of remeber bands arrives with The Presidents Of The United States Of America (fabulous in the 90's with their hit Peaches or their cover of Video kill the radio star), James, Manic Street Preachers or The Charlatans, while on the other hand we can find new band who hype this year as Kodaline or Telegram. As part of establish bands with an endorsement by the public and critics we can find Klaxons, The 1975, MIA, Chase & Status, Tame Impala or youngers idols in the UK as Jake Bugg or Tinie Tempah.