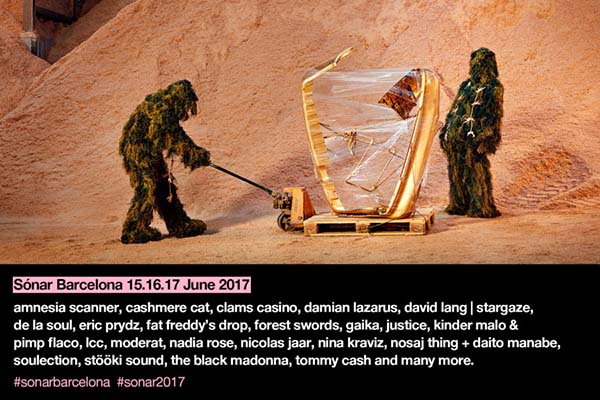 After months without news in which we only knew part of the image of this year, Sónar 2017 has just announced the first names for its line-up, highlighting the presence of Moderat, Justice, De La Soul and Nicolas Jaar. In addition to the previous ones, they have also been confirmed Eric Prydz, Fat Freddy's Drop, Nosaj Thing along with Japanese Daito Manabe), Damian Lazarus, Forest Swords, Cashmere Cat, The Black Madonna, Nina Kraviz, Stööki Sound, Nadia Rose, Tommy Cash or dispensable Kinder Malo & Pimp Flaco, stars of Spanish youtube trap… It has also been revealed that the usual concert at the Auditori will feature Death Speaks by the American composer David Lang, which will be performed by the Berlin collective Stargaze on Sunday, June 18.

Tickets for Sónar 2017, to be held from 15 to 17 June in various locations in Barcelona, are now on sale with a price of €165+fees for the 3 days ticket, although from this Friday 2 December SonarGift will be on sale, a promotion that includes the festival subscription plus an entrance ticket for exhibition "David Bowie Is", with a price of €170+fees.