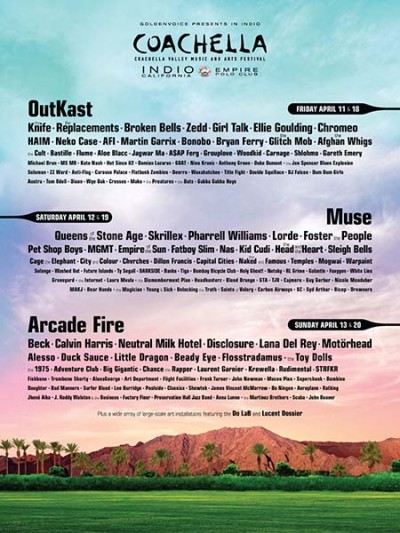 Acclaimed U.S. Coachella festival has unveiled what will be the lineup of the 2014 edition. As big headliners highlighted Outkast, Muse and Arcade Fire, but there are also gems like Haim, Queens of The Stone Age, Mogwai, Foster The People, Bombay Bicycle Club and more spectacular artists during the two editions of the festival, one on the weekend 11 to 13 April, and another in the following weekend, from 18 to 20 April. If you want to go, I must say that General Weekend 1 admission has already been sold out, being still avalaible for week 2 at a price of $ 375. Here you have more information about the festival.