Canadians Arcade Fire came back to Barcelona just one year after presenting worldwide their latest album Everything Now (2017) at Primavera Sound 2017 Festival. If on that occasion the two shows at  Barcelona’s festival left us with a somewhat bitter aftertaste, the concert before a Palau Sant Jordi with almost 80% attendance from the band led by the brothers Butler and Régine Chassagne was an absolute success that showed why Arcade Fire is the greatest band of the indie scene. 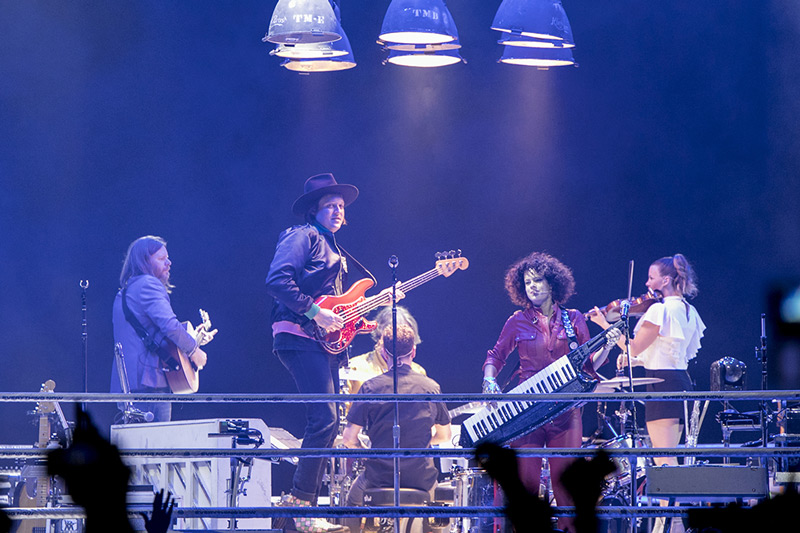 With an arrival in style, as if it were a great evening of boxing, the Montreal band went out through a side entrance of Sant Jordi Arena, after a walkabout crossing the ring, arriving at a square stage that simulated a boxing ring. With the help of spectacular lighting set and a staging that is accessible to a few (U2, Coldplay…) in which a part of the circular stage and the continuous changes of instruments among the members of the group stood out, the beginning of the concert take no prisoners with the concatenation of "Everything Now", "Rebellion (Lies)". "Here Comes the Night Time" or "No Cars Go".

After them, "Put Your Money on Me" stood out among the excessively slow "Electric Blue" and "It's Never Over (Oh Orpheus)", although the madness would be unleashed again when were played "Neighborhood # 4 (7 Kettles)", "Neighborhood # 2 (Laika)" and "Neighborhood # 1 (Tunnels)". From here, there was no time for a new break, with Régine Chassagne singing from the audience some themes, several members of the band playing instruments from the ring or a variety of lights that fit perfectly with songs of the caliber of "The Suburbs", "Ready to Start", "Sprawl II (Mountains Beyond Mountains)", "Reflektor" or "Afterlife", leaving as the only objection the low volume of Sarah Neufeld's violin, which disappeared continuously among the multiple sound layers proposed by the Canadians.

"Creature Comfort" proved to be the strongest theme of their latest album, while "We Don't Deserve Love" was the biggest downfall of the concert as incomprehensible first encore. With the help of the Preservation Hall Jazz Band, "Everything Now" would reach new nuances just before closing the concert in style with the messianic "Wake Up", choreographed in unison by an excited Sant Jordi Arena who said goodbye the artists with a sonorous applause after more than two hours of concert. The Canadians, in an all-night keynote, returned that gratitude as they left the arena walking until the same door where they had started the concert with a closeness and attention to the audience difficult to see today in a band of their importance.

So, sticking out concert of Arcade Fire, which cleared any doubt about their current level by offering a colorful show full of nuances both in the musical and in the scenography, after what is perhaps the weakness record of their discography. Despite a few small bumps in the setlist, it is difficult not to have the feeling of enjoying something unique for which it is worth paying the high price of entry, in addition to confirm that despite the criticism that Everything Now (2017) has received, the selection of tracks from this last album that they include in a already magnificent setlist is not out of place at all, providing even a bouncy dance touch.