The beautiful landscape of Groene Heuvels in Ewijk, very close to the best known Nijmegen, was once again the site of a new edition of Down The Rabbit Hole, the third of its story that had The National, PJ Harvey and Anohni as main headliners of the lineup. Just like in the Best Kept Secret Festival, held a week earlier, the rain was the star of the previous days, flooding the public areas of the festival such as the camping or the parking and hindering the overall logistics of it, as it was demonstrated on multiple aisles of metal plates between scenarios to avoid stepping on the quagmire installed to facilitate the movement of the audience. 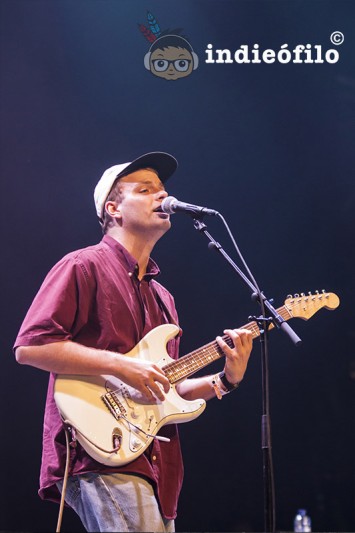 All these troubles caused that arrive to it became a very small odyssey and our entrance in the festival was later than expected, being the one from Mac DeMarco our first show of the festival. As in the show that he gave last year at the Primavera Sound, the mix of music and comedy show from the Canadian left a mark only in the first rows of a tent that maybe was too serious waiting for PJ Harvey. Among continuous jokes, the music was on a light background where highlighted the lack of presence in the sound of the keyboards, the role of the drums and the excellent version of the classic of Steely Dan "Reelin in the Years" in what was a brief tour of his last 3 LPs. Immediately afterwards it was time for British Everything Everything, which we enjoyed as supporting band of Foals few months ago, and whose spectacle was marred by irregular sound on the voice of Jonathan Higgs, with his characteristic falsetto sounding very weak in the first themes. After a short speech by the Mancunians alleging that they wanted to remain in the European Union on a day marked by the news of Brexit, "Regret" aroused the public and slightly warmed an atmosphere that only get up again on the final moments with "Spring / Sun / Winter / Dread" and "Distant Past". 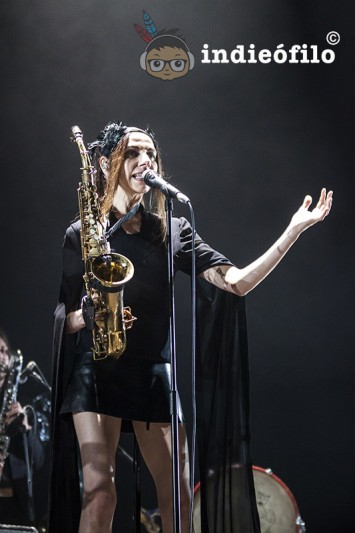 The great moment of the day had come and PJ Harvey did not disappoint. With a spectacular staging accompanied by more than a dozen musicians, the start of the concert was forceful with own Polly Jean at the saxo playing the most powerful themes of her last LP The Hope Six Demolition Project, as "The Ministry of Defence" or "The Community of Hope". Precisely the first song out of this new LP would be "Let's England Shake", after which the woman from Dorset recited the poem "No Man Is An Island" by John Donne, written in the early seventeenth century which speaks about the relationship between Europe and England, on what was a clear statement of intent of the singer against the recent results of the Brexit referendum. With the public already in her favor and with the guitar of John Parish and the arrangements on the horn section by Terry Edwards as clear protagonists, the songs from her new album were played one after another, attracting not only the fans of the British who occupied the front rows, but also a most respectful tent that attended awed by the power and strength of the ensemble sound. We would have to wait for the final moments of the concert to listen some songs from their older albums, like "50ft Queenie", "Down by the Water" or "To Bring You My Love", which were a perfect finale to a magnificent concert which demonstrates why PJ Harvey is one of the great ladies of the independent world scene.