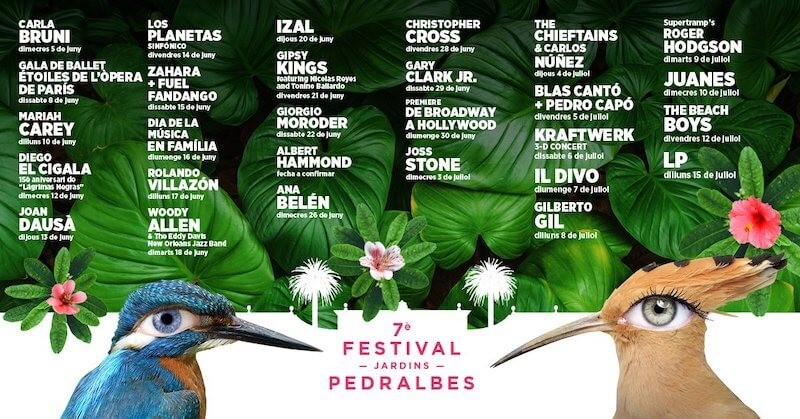 With famous Carla Bruni in charge of opening the festival, among its wide range of names we can highlight the Germans Kraftwerk and their 3D show, Los Planetas playing Una semana en el motor de un autobus (1998) with orchestra and choir, Giorgo Moroder, Zahara, IZAL, Joss Stone, the blues of Gary Clark Jr., the French LP or the delicacy of Joan Dausà. Outside the usual styles of this webzine we find international and Spanish artists like Roger Hodgson (Supertramp), Albert Hammond, the Gipsy Kings, Diego El Cigala celebrating the fifteenth anniversary of Lágrimas Negras (2003), Il Divo, Woody Allen & The Eddy Davis New Orleans Jazz Band, Juanes, The Beach Boys, La Gala de Estrellas y Solistas de la Ópera de París, Fuel Fandango, Rolando Villazón, Ana Belén, Christopher Cross, The Chieftains with Carlos Núñez, Gilberto Gil or Blas Cantó and Pedro Capó. In addition, this year we will have the Family Music Day back on 16 June (absent since 2016), where there will be concerts, workshops and activities related to music, as well as animations and snacks for children, with free admission for children under 12 years.

Tickets for the festival, whose prices vary depending on the concert and the area, are already on sale on the official website of the festival.