Last Wednesday, on the coldest night of this year in Barcelona, the Americans Algiers landed at Sala Razzmatazz 2 that surprisingly was not even 50% full to present their second album The Underside of Power (2017). Neither their two excellent records nor their more than justified live fame managed to attract the public of the Catalan city to which without a doubt it was one of the concerts of a 2017 that is close to end. 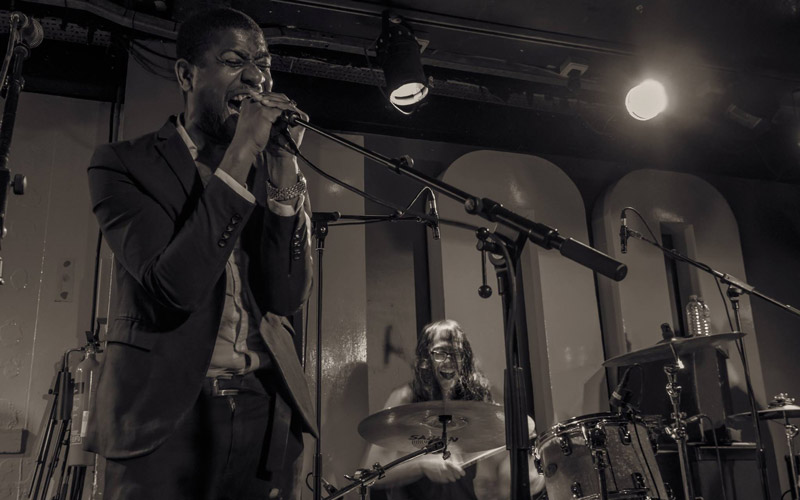 The one in charge of opening the night was her compatriot Hiro Kone, who with a successful set of minimalist experimental electronics made us fear the worst due to annoying reverberations of bass that happened in the final part of a room covered with canvas.. However, as if by magic, as soon as the now quartet with the union of the unrecognizable ex-Bloc Party Matt Tong jumped on stage, all suspicions disappeared, as the industrial post-punk of Atlanta's band quickly conquered the room. Nowadays, it is difficult to find bands that fill up the stage like Algiers, with a Franklin James Fisher unleashed in the voices that only seems to calm down slightly as soon as he sits down to his Wurlitzer piano and a spasmodic Ryan Mahan who seems to live a continuous internal struggle between to play the bass, to launch electronic rhythms or to dance like a fifteen year old on the Spanish techno route..

Beyond the stage presence, their intense 60-minute concert had few moments of calm after an overwhelming start with "Animals", "Walk Like a Panther" and his intro with Fred Hampton's speech to his son or "Cry of the Martyrs", demonstrating that they perfectly transfer the anger and the message of their combative lyrics to the live proposal. After a small impasse with one of their few visits to their debut album in "But She Was Not Flying", one of the moments of the night would come with the powerful "Death March", which grew from the subtlety of the piano and the xylophone to the power of huge drums that was blurring the initial sound until ending in a kind of controlled chaos that received a loud ovation from the crowd.

The social demands would continue in "Cleveland", where perhaps the excess of distortions in Fisher's voice tarnished the global of the song a bit, to then concatenate themes of Algiers (2015) as "Old Girl" and "Blood" in what It was perhaps the most calm phase of the concert. However, from "Irony. Utility. Pretext" the concert would resume its cruising speed thanks to a greater presence of a superb Matt Tong from the drums, reaching Georgia’s state band an incredible sound that resembles the perfect blend of the electronics of Health, the attitude of Savages and the new soul tone by Benjamine Clementine. With the audience at their’s feet, we could enjoy a great ending that started from the accelerated piano blues and bass lines of "The Cycle / The Spiral: Time to Go Down Slowly" and that had as a finishing touch the spectacular "The Underside of Power", one of the themes of the year in which they approach from the classic soul of the 70s to more commercial proposals without forgetting even a minute of their combative essence.