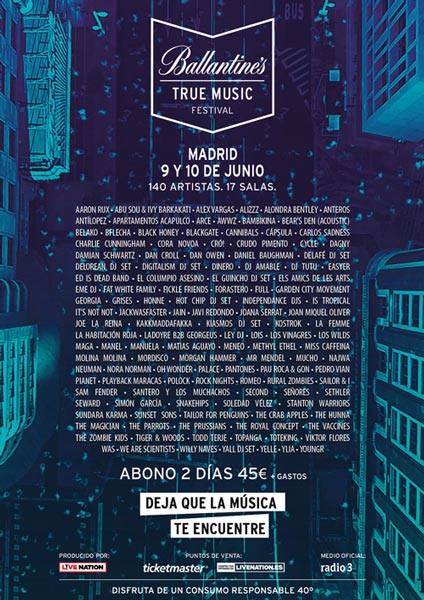 After awakening as far as festivals are concerned with Mad Cool, DCode or Tomavistas, the city of Madrid will have a new event that between 9 and 10 June will allow to enjoy in 17 rooms of various neighborhoods around 140 artists. Ballantine's True Music Festival, which is the name the festival will bring to the Spain's capital a big number of renowned bands like The Vaccines, Digitalism DJ Set, Fat White Family, Yelle, Is Tropical, Todd Terje, We Are Scientists, The Royal Concept, Jain, Kakkmaddafakka or Oh Wonder, in addition to Spanish proposals such as Manel, La Habitación Roja, Carlos Sadness, Belako, El Amics de les Arts or Alondra Bentley, among others.

Tickets for the festival will go on sale on the Official website of the festival, Ticketmaster and Livenation tomorrow, April 21 at 10:00 with a price of 45 euros + fees. If you reach one of the rooms and is already full, attendees will be able to enjoy other concerts a few meters from where they are, since the festival will have from May 25 with an app with all the programming that will also indicate what is the Real status of the capacity on each room.