Low Festival 2014 has announced on radio show Hoy empieza todo from Radio3 a new row of international bands that raise the level of a line-up where already were  Editors, The Hives, Vetusta Morla or Blood Red Shoes, among others. 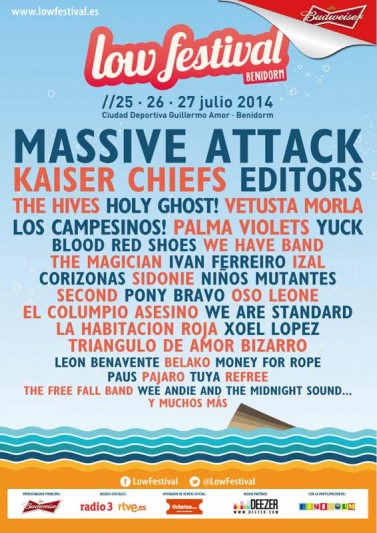 Great big name for this edition is, without a doubt, British band Massive Attack, who will be on Budweiser stage to introduce their new show, just a month later on being in another Spanish festival, Sonar 2014. On the other hand, always festive band Kaiser Chiefs will defend live their new LP Education, Education, Education and War, while other bans as Holy Ghost!, Yuck, Palma Violets or We Have Band will present their lasts jobs.

We remember you that the festival will be held on 25th,26th and 27th of July in Ciudad deportiva Guillermo Amor at Benidorm, and the current prize for 3 days ticket is 58€ +fee, that can be bought at the official website of the festival.