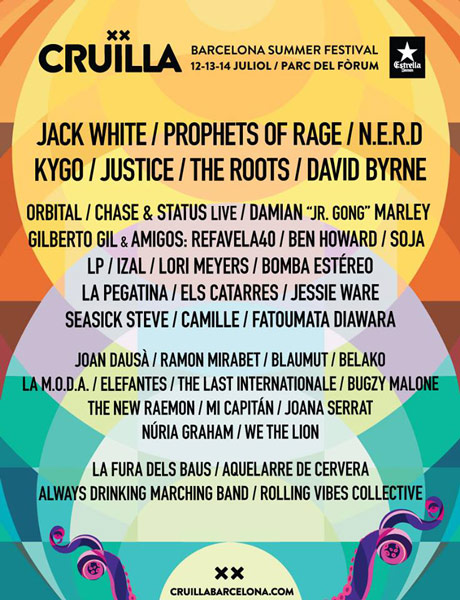 After announcing a first batch of confirmations last December, the organization of the Catalan Festival Cruïlla have announced today all the names that will be part of the lineup of the 2018 edition. As big headliners we will have the North Americans Jack White, Prophets Of Rage or N.E.R.D, the band led by the popular Pharrell Williams, as well as other names such as Justice, The Roots, Ben Howard, Kygo, Orbital, Chase&Status Live, Gilberto Gil, Jessie Wave or The Last Internationale, among many others. Amid the Spanish proposals we can enjoy this year names like those of Lori Meyers, Belako, The New Raemon, Mi Capitán, La M.O.D.A. or Núria Graham, in addition to surprising proposals such as La Fura dels Baus (Famous Worldwide for the opening Ceremony of Barcelona's Olympic Games in 1992) or the presence of Aquelarre de Cervera, party full of fire and demons.

Cruïlla 2018 Festival, which will be held from July 12 to 14 at the Parc del Fòrum in Barcelona, thus the same days of Mad Cool and BBK Live, remains firm in a lineup that focuses on the fusion of styles, which has allowed it to grow in a sustainable way every year up to 25,000 people per day, maximum capacity with which according to festival director Jordi Herreruela is achieved that the Barcelona festival will never loose its essence and proximity to the audience. The tickets are already on sale on the official website of the festival with a price of 135 euros +  fees, while in March the day tickets will go on sale, reminding you that for children up to 15 years old including, admission is free (accompanied by mother / father or guardian).