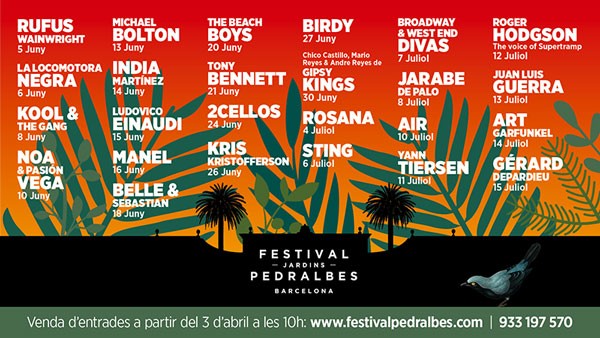 We've got a shock when we have known the lineup that the organization of the Pedralbes Festival has unveiled this morning for its 2017 edition, which will take place in the months of June and July inside the Jardins Palau Reial Pedralbes in Barcelona. Rufus Wainwright will be the one in charge of opening the festival on June 5, and among the 25 concerts scheduled we will enjoy The Beach Boys, Tony Bennett, Sting, Art Garfunkel, Roger Hodgson, Belle & Sebastian, Birdy, Yann Tiersen, Ludovico Einaudi, Air, Gipsy Kings, Manel and even actor Gérard Depardieu, among others.

Tickets for each of the shows will go on sale next Monday, April 3 at 10:00 am through the official website of the festival.