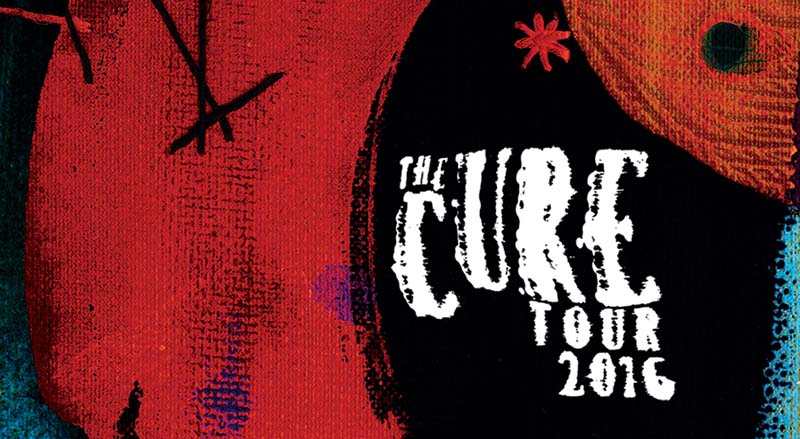 British The Cure returned to Spain after their visit to Primavera Sound in 2012 on the occasion of the European tour that celebrates in 2016 the fortieth anniversary of their birth as a band. For this reason, and despite the fact that Robert Smith's band has not released a new record since 2008, the show at Palau Sant Jordi with all the tickets sold out exactly one year ago was presented as a great opportunity to enjoy the immense repertoire of one of the capital bands of the twentieth century, accustomed to offer in the last years gigs of about 3 hours long..

Based on the premise that their setlist mutates in each city with the ease of an X-men, was surprising a start with "Open" instead of the almost obligatory "Plainsong", probably the perfect song to open any concert in the world for one who write this lines.. From here on, the first part of the nearly 90-minute show mostly focused on The Head On the Door, their 1985 album, playing "Kyoto song", "A night like this", the great "In between days", "Sinking" and "The blood" with its flamenco style, which usually include in all their  shows in Spain and where Robert Smith used to play some Andalusian rhythms in its introduction with the acoustic guitar. It is also worth mentioning in this first block the presence of hits like "Pictures of you" and "Just like heaven", or the perfect integration of Reeves Gabrels into the overall sound of the band, as it was observed in the subtle chords of his guitar in "From the edge of the deep green sea", but without a doubt Roger O'Donnell and his keyboards had the absolute protagonism, that brought out that dark side of the band in subjects like "Primary", "Charlotte sometimes"or the cryptic "End", with which the band said goodbye for the first time.

The first break didn’t go over well to the concert atmosphere, which was over-relaxed and was not the best for the unpublished "It can never be the same", a small song on their discography that would have had a difficult time in the albums of the 80, followed by "Burn" and a couple of tracks from the album Seventeen Seconds as "Play for today" and "A forest", which served for the personal brilliance of a Simon Gallup that until then was more aware of his movements on stage than of his incredible abilities on the bass guitar. In the wake of the previous one, the second encore was turning slowly toward their emo side and we could enjoy "Shake dog shake" and "Fascination Street", strong evidence that the voice of Robert Smith is better than ever, with clear and powerful tones after more than two hours of concert.

With the biggest fans already surrendered at their feet, it was time to received the easy applause that all the major bands seek in their concerts when play their greatest hits. And what a way to do it had the English! The last 30 minutes of the concert turned into a continuous pop party in which "Lullaby" was the start of the party, with Robert Smith and Simon Gallup got closer in a square meter to play the opening chords, and "Hot Hot Hot", and later with the audience up and dancing, ending with "Friday I'm in love", "Boys don’t cry", "Close to me" and "Why can’t I be you?", that supposed the end of a concert that was an excellent review to the first 15 years of their discography and in which I personally missed the null presence of the most recent albums like Wild Mood Swings, Bloodflowers, The Cure or 4:13 Dream.