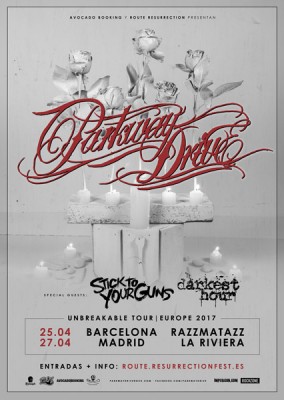 Just a year after their last visit to Spain, one of the bands with best live within the international metal scene as the Australians Parkway Drive will return to Barcelona and Madrid. Thanks to Spanish metal festival Resurrection Fest and as a part of a new Route Resurrection, the band led by Winston McCall will play on April 25 at Razzmatazz in Barcelona, and two days later on April 27 at La Riviera in Madrid, accompanied in the two cities as warm-up bands by Darkest Hour and Stick To Your Guns, in what will be an impressive Metalcore soiree.

This is the only chance to see them in Spain in this 2017, as they will not be in any festival after announcing the band has decided not to tour this summer. Tickets can be purchased on Route Resurrection's official Website from Monday October 31 and physically on Sun Records (Madrid) and Revolver Records (Barcelona), with a price in both cases of 25 euros + fees.