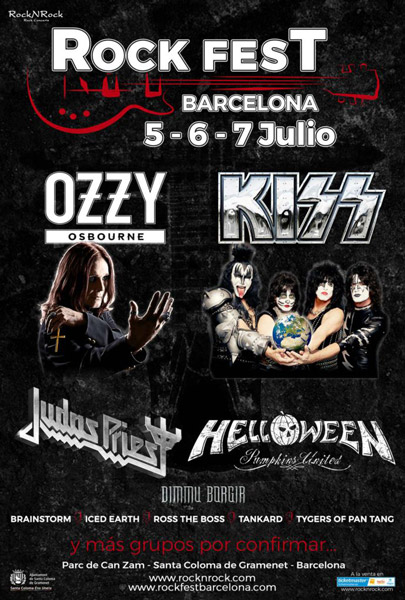 10 days after announcing Judas Priest, Spanish Festival Rock Fest Barcelona continue surprising everybody with a level of confirmations that almost ensures that its 2018 edition, which will be the fifth in its history, will have an unbeatable line-up.. In a news that has caught the world of metal by surprise, the organization of the Catalan festival has confirmed that Ozzy Osbourne and Kiss will be two of the big headliners of this edition; in the case of the singer of the mythical Black Sabbath with a closed date for Thursday, July 6. As if that were not enough, the organization has also confirmed that the last headliner of this edition will be announced on December 1.

The three-day tickets for the festival, which will take place between July 5 and July 7, 2018, at Parc de Can Zam in Santa Coloma de Gramenet (Barcelona), are on sale with a promotional price of €150 (+ fees) until November 22, and can be purchased on the RocknRock official Website and also Ticketmaster or its Ticketmaster ticket network (Halcón Viajes, Fnac, Carrefour…).