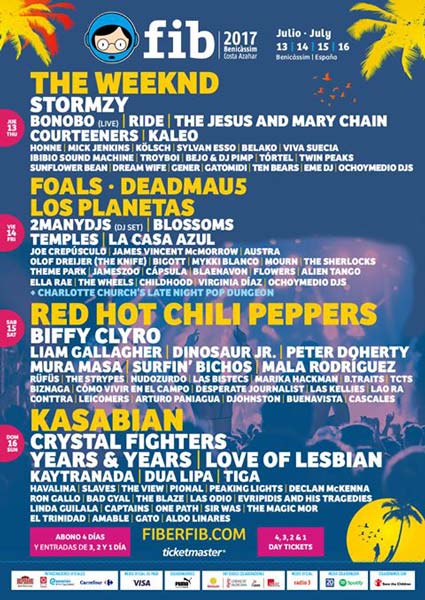 After confirming Spanish rapper Mala Rodríguez on the last days of May, Spanish Festival FIB 2017 has closed its lineup with more than 20 new names. In addition to classics of the festival such as Aldo Linares or Amable, in this new batch highlights the names of the Irish The Strypes and the English Childhood, alongside Spanish bands such as Nudozurdo, Havalina, Capsula or Las Bistecs. The rest of the names of this batch are Arturo Paniagua, B.Traits, Bad Gyal, Buenavista, Cascales, Charlotte Church’s Late Night Pop Dungeon, Djohnston, Eme DJ, Evripidies And His Tragedies, Gato, Gener, Ibibio Sound Machine, Jameszoo, Las Kellies, Linda Guilala, Mick Jenkins, Olof Dreijer (The Knife), Sir Was, The Blaze, The Magic Mor y Virginia Díaz.

4 day tickets for the festival, that will be held from July 13 till July 16 in Benicassim (Castellon), are available at Official Website of the festival with a price of a €149+fees including 8 days camp site at Campfest. Day tickets are also available with prices, ranging from €50 to €65 + fees.