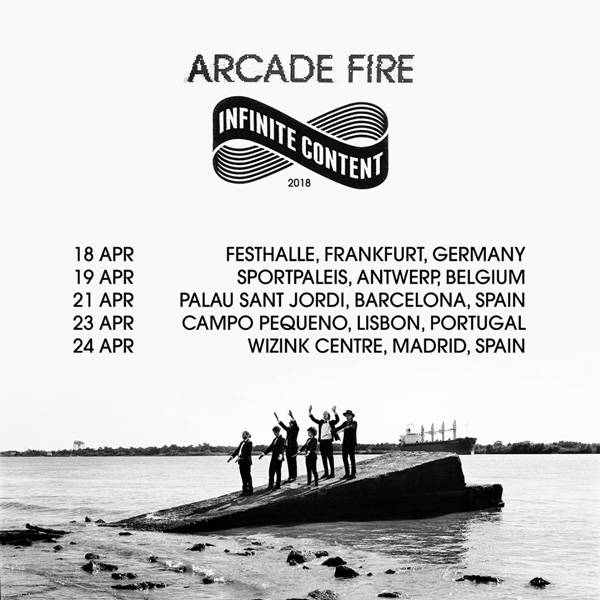 Canadian band Arcade Fire just announced a mini tour of 5 concerts for the month of April. After doing the world premiere of Everything Now (2017) at the last edition of Barcelona's Festival Primavera Sound, the band of Win Butler and cia. will return to the Catalan city on April 21 at Palau Sant Jordi, while three days later, on April 24, they will perform at the WiZink Center in Madrid. Other cities included in this small tour are Frankfurt, Antwerp and Lisbon and the supporting act on all the cities will be the mythical band of New Orleans Preservation Hall Jazz Band.

ickets for all gigs will be on sale Fri 29/09, except Lisbon one that will be on sale Sat 30/09. Tickets for Spain gigs, with prices ranging from 40 to 60 euros (+ fees) will be available in pre-order on Thursday, September 28th at 10:00 am through official Website of Live Nation Spain,  while the general sale will be open from 10:00 am on Friday, September 29 at the usual Spanish ticket platforms: Livenation, ticketmaster and ticketmaster ticket network (FNAC + Carrefour + Halcón Viajes).