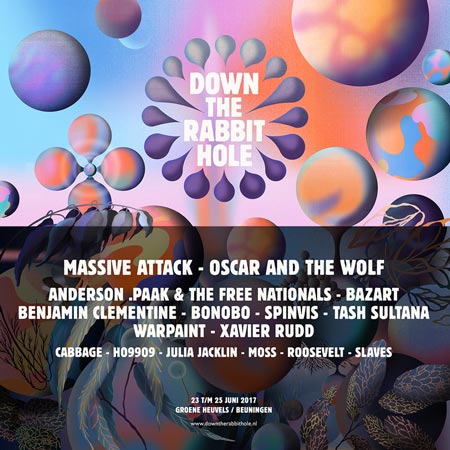 By accident, Australian musician Xavier Rudd has leaked on his profile on bandsintown the first batch of names for Dutch festival Down The Rabbit Hole 2017. On this first batch were confirmed that the festival, who will be held in De Groene Heuvels (closer to Nijmegen) from 23th until 25th of June, will have Massive Attack and Oscar & the Wolf as main names, but also some of the best bands of 2016 as Anderson .Paak & the Free Nationals, Warpaint or Roosevelt. Other names confirmed are Slaves, Benjamin Clementine, Bonobo, Tash Sultana, Cabbage, Bazart, Spinvis, HO9909, Xavier Rudd, Julia Jacklin and Moss.