25 years after playing for the last time on the same stage, Guns N'Roses returned to Barcelona in a massive tour that brought together more than 50,000 nostalgic people who packed the Olympic Stadium Lluís Companys to the rafters, who wore mainly in t-shirts from the 90s, showing the desire in the city to see the mythical North American band with a formation almost identical to the original. 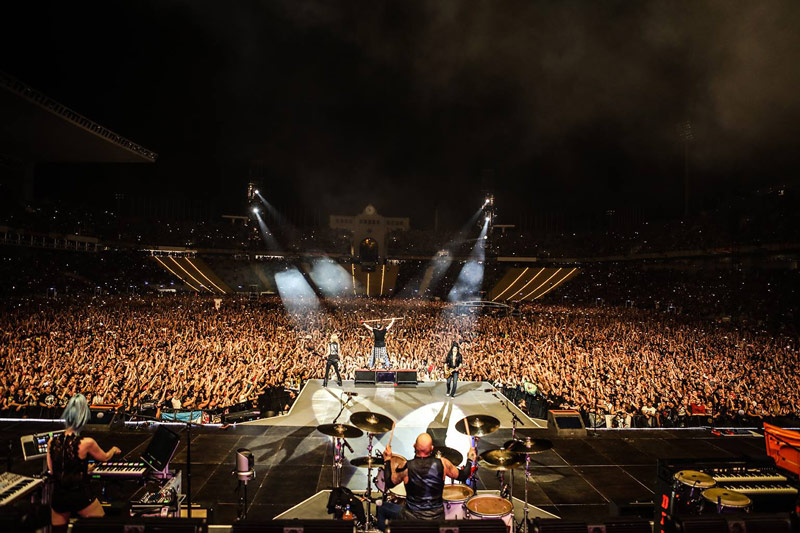 After Nøthing Møre's dispensable concert and the forcefulness and quality of the Danish Volbeat (Present and future of trash metal), a never-ending and repetitive video served as a prelude for the great protagonists of the night to take the stage. Accompanied by huge side screens (on which more general recordings were missing to allow people from the sides to enjoy the entire stage), Axl and his crew started the show accompanied by fireworks with the sound of two themes from Appetite for Destruction (1987) such as "It's So Easy" and "Mr. Brownstone", which served to confirm from the beginning what was going to be the keynote of the night; Axl's voice was better than some of us expected, but was quite not enough for more than 30 minutes of quality…

For more than 3 hours, the Californian band was playing a medley of their own songs, where surprised the coexistence of some of the songs from the cursed Chinese Democracy (2008) or even "Slither" by Velvet Revolver (the parallel band formed by the rest of the band's members when they left GNR in early 2000), with an endless number of covers that at times are difficult to defend on the setlist of a band that enjoys an original repertoire as amazing as that of Guns N’ Roses. In this way, "Welcome to the Jungle" or the brilliant "Estranged", undoubtedly the best song of the whole repertoire, were the mainstays of the first line of the concert, where the main role of a Duff McKagan who was excellent on bass was particularly highlighted, as well as covering up the deficiencies of the main voice with some saving background choirs. 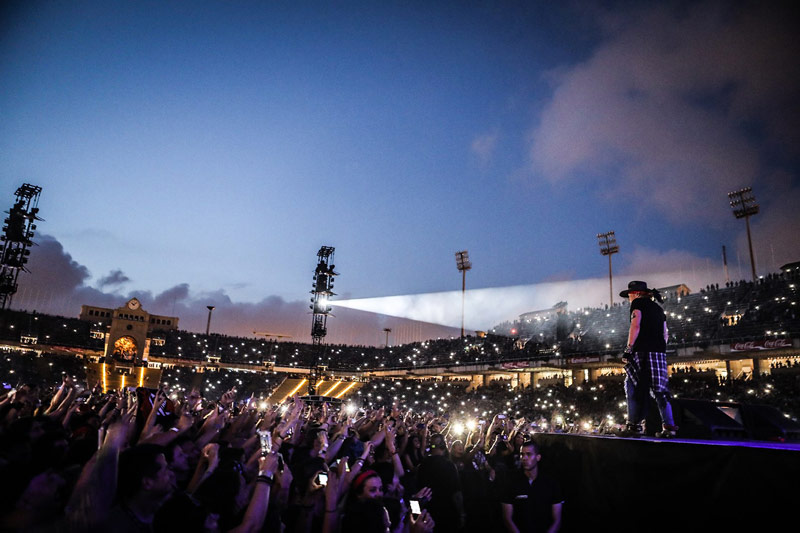 After the Wings' fast-paced cover of "Live and Let Die", "Rocket Queen" and "Shadow of Your Love" threw cold water on the rhythm of the show, so "You Could Be Mine" appeared as a lifesaver in the middle of the concert, with Axl Rose's voice surprisingly clear and sharp than some previous tracks… In what was going to be the tone of the whole concert, I feel that Axl only reaches the minimum voice requirement in the band's timeless hits, leaving us with a coitus interruptus for a good part of the concert when the aforementioned choirs by Duff McKagan or the almost invisible Melissa Reese from the subsequent keyboards are heard with more power… Luckily for us, next 30 minutes were going to have Slash as a clear protagonist, keeping the rhythm of the band with his incredible solos based on bendings that went from rock to blues or even scales that remind us of a Spanish guitar. "This I Love", "Civil War" or "Yesterdays" were the least chanted songs on their setlist despite Frank Ferrer's good drumming on the second one, and only Slash's commitment on the magical "Coma" or his incredible solo performance when he played the chords of The Godfather's OST, kept the concert afloat when the audience were putting the show aside. 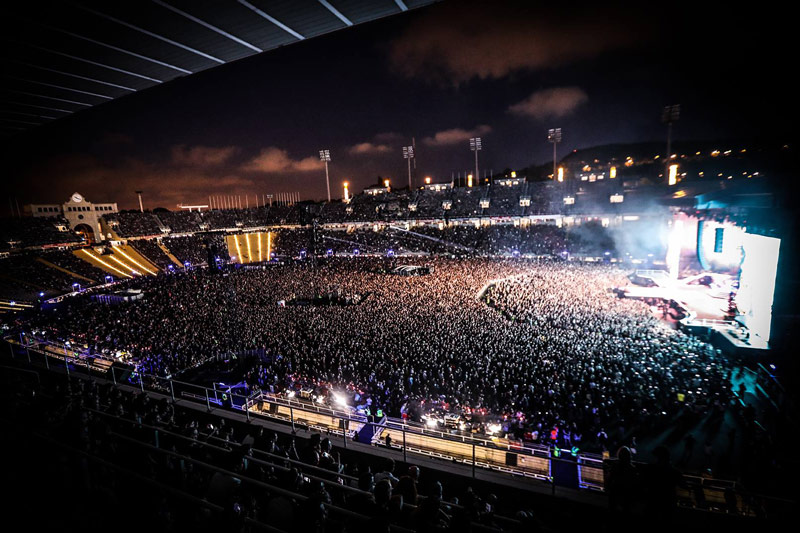 From here, they work their heart out for an amazing last hour that would start with the greatest of their hits "Sweet Child O' Mine", satisfying thus to an audience that was waiting for recognizable songs. Perhaps because of this high, it is so incomprehensible that Jimmy Webb's calm version of "Wichita Lineman" or an anodyne "Used to Love Her" were the songs that served as a bridge to another of their timeless hits like "Don't Cry", one of the great moments of the concert where the whole band sounded wonderfully. The guitar duel between Richard Fortus and Slash in the cover of the "Wish You Were Here" of Pink Floyd was a bit tedious along the way, although we later discovered that it was completely necessary as the technicians were preparing a piano in the centre of the stage for Axl and his 500 rings to unleash the madness with "November Rain", a song that managed to fill the Olympic Stadium with mobile phone recording the moment for posterity. With tailwind, Axl himself would destroy Soundgarden's "Black Hole Sun" and then they would close the concert with the incredible version of Bob Dylan's "Knockin' on Heaven's Door" and "Nightrain", a return to the original rock that go over well to the band…

The awaited encores left us with a diluted interpretation of "Patience" with Axl not reaching almost any of the notes and a new nonsense in the form of a cover of The Who in "The Seeker". Although that seemed to be in the distant past as soon as the first notes of "Paradise City" were played, which, accompanied by fireworks, was the perfect end around 1am for the walkabout that the American band had yesterday in Barcelona. Thus, a remarkable spectacle of the band from L.A. that had as strong points the attitude and the rock essence of Slash and Duff McKagan, the high level in the second guitar of Richard Fortus and a series of hits that accompanied by a spectacular scenography are already worth the price of the ticket by themselves. On the other hand, remain like big black holes Axl's voice, unable to sustain the rhythm of the concert, and the huge number of covers on a setlist that being somewhat shorter (close to two hours) would certainly have a greater effect on the audience.