Catalan festival Primavera Sound 2017 kicked off the main part of its programme at the Parc del Forum with Solange, Kate Tempest and Miguel as big winners of the day, the consecration of King Lizard and the Gizzard Wizard that offered a true show of rock, the pleasant surprise that the new album by Bon Iver wins on its performance live and the realization that Aphex Twin has long ceased to worry about what the multitude will expect, as he demonstrated when he delivered a session full of extreme passages that "expelled" those who expected something more "for all audiences" of the genius of electronics. 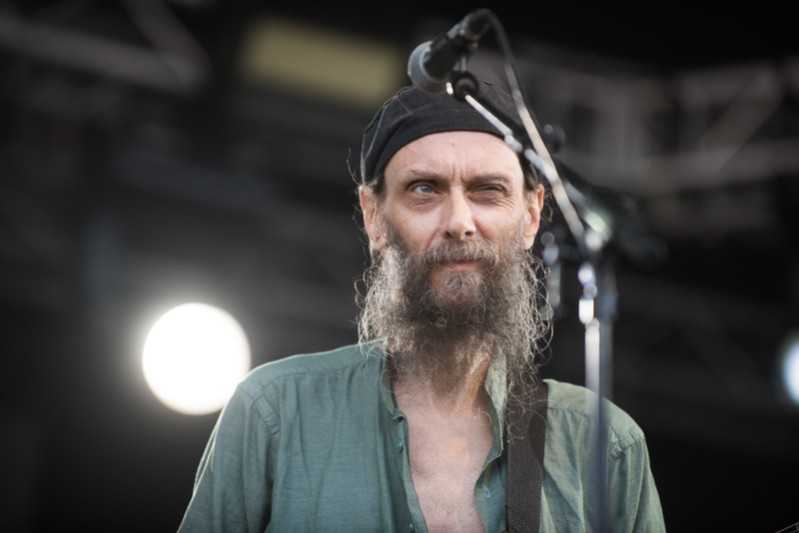 Photo by Garbiñe Irizar provided by the organization of Primavera Sound 2017.

After an endless number of access queues that were solved faster than originally planned, our first contact with this year's edition were the local band Mishima, who presented their new album Ara i Res (2017). Despite the burning sun, David Carabén's band managed to offer a very solid concert in which new songs like "Una sola manera" or "Qui més estima" merged perfectly with classics from their discography as "Tot torna a començar" And "L'olor De La Nit", helped by a great Pablo Fernandez at the trumpet. Minutes later, and a few meters away, British band This Is Not This Heat demonstrated that risk and experimentation that led them to be considered a cult band in the early 80's. Charles Bullen and Charles Hayward, with Hot Chip's Alexis Taylor as guest star in the keyboards, did not take prisoners in a show, in which as could be heard in "S. P. Q. R.", they mixed at the same time sounds from the Korg with clarinet notes or overlapping voices, remembering at times that structured chaos of Swans of Michael Gira. 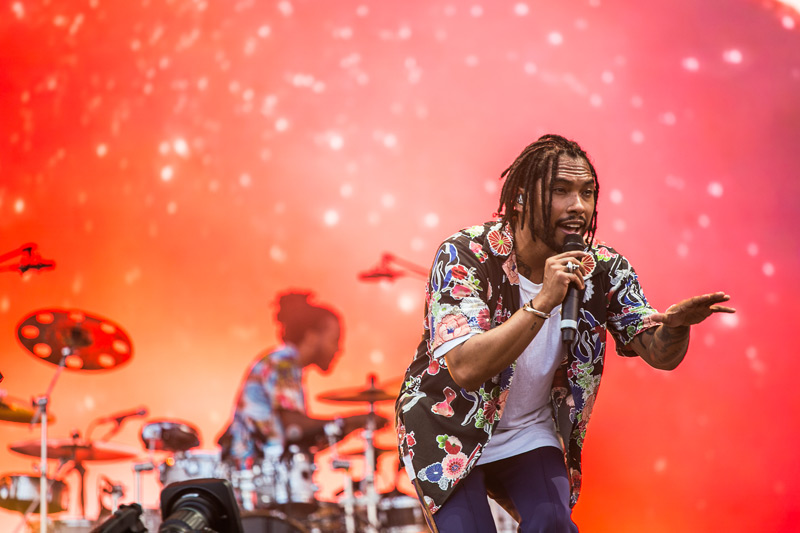 At the same time, in one of the surprises of the day in the “Unexpected Primavera” program, Canadians Arcade Fire gave a concert where they presented a couple of new songs and some of their greatest hits. As the band of Will Butler and company will be the main guest of Saturday, we chose to approach the main stages where the Californian Miguel has just started his show, and according to the one that offered the guy of Los Angeles, the decision was the right one. His mix of r&b with touches of rock and soul, plus a voice that varies moments towards Prince or Marvin Gaye at his whim, managed to connect with the public from the beginning of the show thanks to an overflowing spontaneity with which the American put the public to his feet. Everything came out well in his show, which highlighted the great quality of the band that accompanied him, hits like "Do You…" or a magnificent slowed version of "Candles in the Sun". 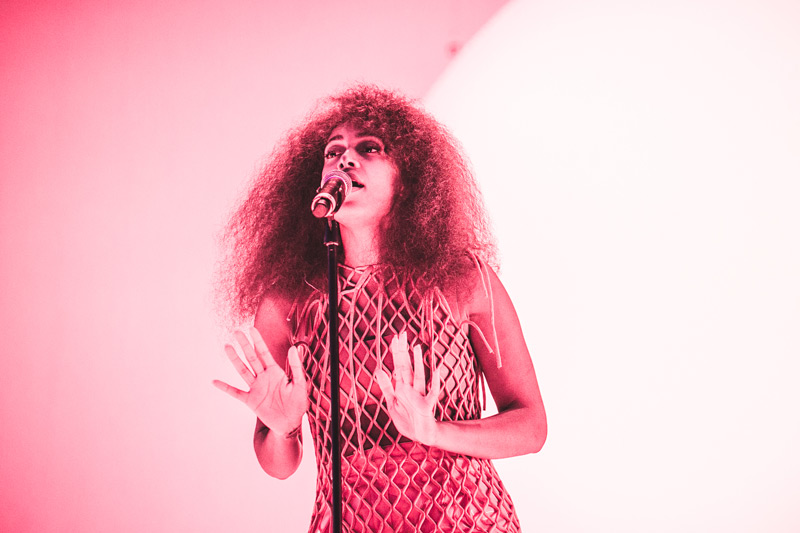 We only have to move 50 meters to enjoy the concert of the day, and who knows if also one of the best ones in the festival, as the smallest of the Knowles sisters showed us why in 4 years she has jump from of the minor stages of the festival to fill up, and convince, in one of the main scenarios. With a minimalist set in which highlights a huge sphere located at the center, a set of eminently red lights and up to 7 musicians dressed in the same color, Solange introduced A Seat at the Table (2016) among multiple choreography without neglecting any moment of the most important thing, a vocal quality beyond doubt that blends perfectly with the horn section that accompanies her. A remarkable show where were falling "Weary" or "Mad", but which had its climax with "F.U.B.U." where Solange did not hesitate to jump off the stage to get closer to her fans along the fences. 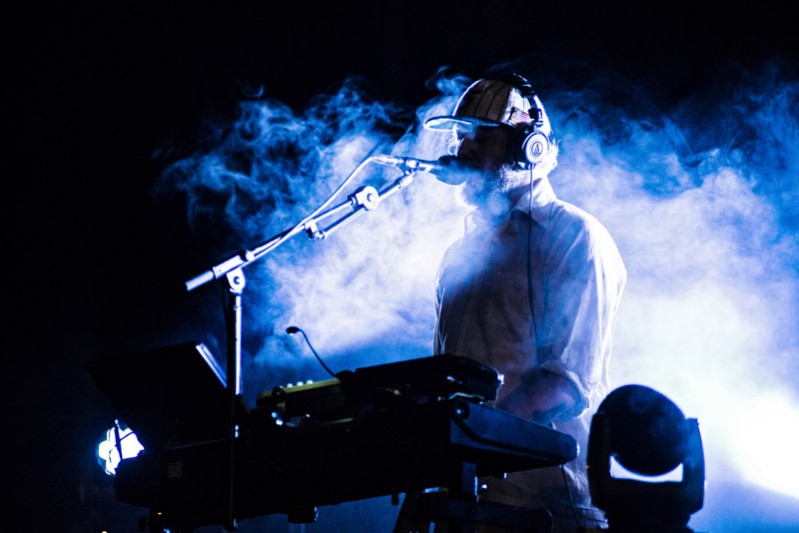 Photo by Eric Pamies provided by the organization of Primavera Sound 2017.

Much of the satisfaction of the concert of the American would be received by his compatriot Bon Iver, who gave a great concert with two distinct phases. In the first one, he defended 22, A Million (2016) bringing it to a new level thanks to a sharp vocal atmospheres away from the autotune of the physical format to reach and even abuse at times of Prismizer effect, while in the second he returned to be that nostalgic and doubting guy of the past. With electronics as a standard  and some majestic projections, the Wisconsin man played up chained to six tracks from his new album, where they excelled "715 – CRΣΣKS" or the paused "29 #Strafford apts", in which its section of winds won the salary of an entire tour.. Suddenly everything changed, and the most classic songs of his discography were falling one after another, with "Beach baby" as the first advance and "Creature fear" as a perfect prelude to the well-known "Skinny love", the only encore of an exciting and intense concert that will be remembered over the years. 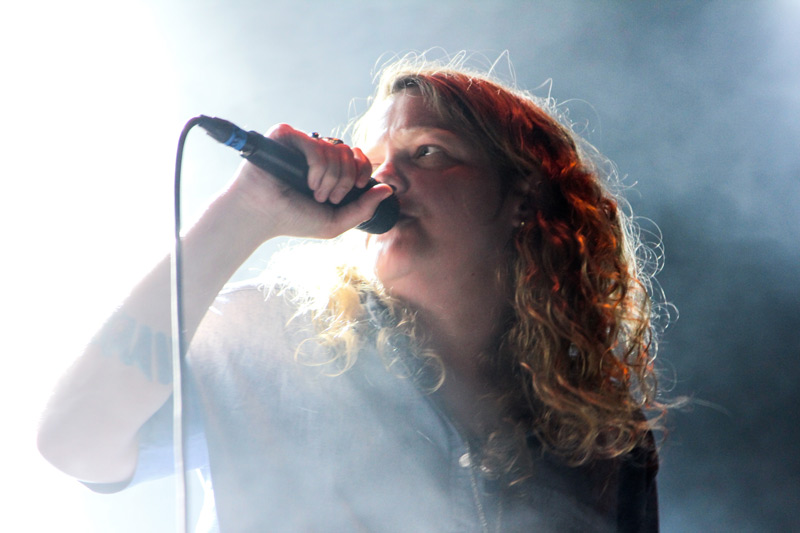 Photo by Dani Cantó provided by the organization of Primavera Sound 2017.

Those who squeezed the show of the American till the end would miss the amazing concert that the British Kate Tempest offered in the tiny stage Adidas Originals.. It is true that she has been lavished a lot at the Catalan city in recent years, but is still surprising how her concert continues hit our nerves in the same way that she did it as the first time. After starting the concert with a speech focused on the recent bomb attack in Manchester, the Londoner unfolded the wonderful Let Them Eat Chaos (2016) rhyme to rhyme, making resonate in our consciences those acidity of letters that gradually move away from the British sentiment to become global. Does anyone still doubt that Kate Tempest is one of the big stars of hip hop worldwide? 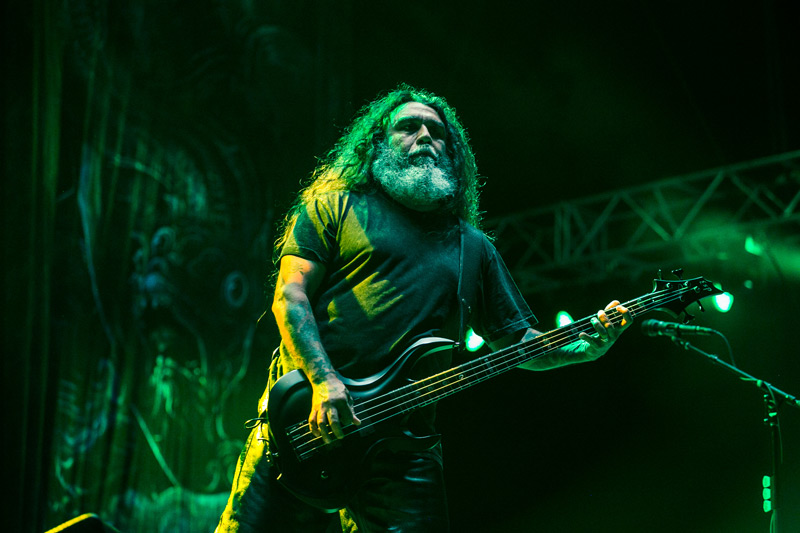 The coincidence of schedules between Death Grips and Slayer made us enjoy half the concert of each of them, starting with that mixture of punk-industrial and hip hop of the Californians. With a thunderous sound that made it impossible to stay in the front rows at risk of permanent tinnitus, Sacramento band forgot about their recent megamix "Steroids" to focus on their past hits like "Get Got", "No Love" or "I've Seen Footage,", unleashing the madness on a packed Primavera stage. Meanwhile, Slayer was a continual roller coaster where left over a lot of  poses and clichés of 80’s thrash metal.. When Tom Araya's band were focused on what they do best, boosting the double bass drumming of Paul Bostaph with the sound of the bass guitar from the Chilean, they were a steamroller that made the audience vibrate, as demonstrated by the pogos of the impressive final with "South Of Heaven" and "Angel of Death". 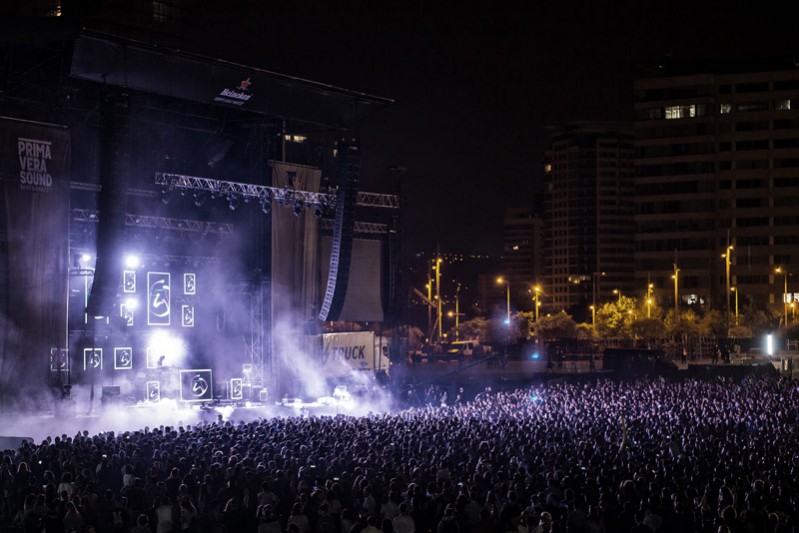 Photo by Eric Pamies provided by the organization of Primavera Sound 2017.

The night was coming to an end and the last major headlining of the day shattered any semblance of reconciliation with the masses. Aphex Twin lives comfortable in its position of electronic and experimental music millennium totem, and proof of it is that he does not hesitate to carry out sessions like those of Thursday, in which he offers you 10 minutes full of dancing rhythms in which flirts with the funk or house accompanied by his deformed faces trademark visuals, which suddenly experiences with over saturations of bass or treble that get to cause headaches that make to flee to the terrifying masses makes proposals less Extreme. 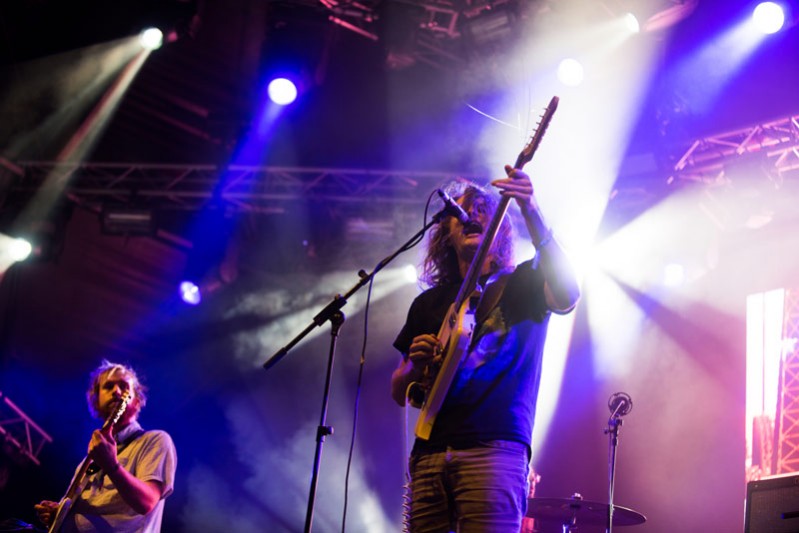 Photo by Garbiñe Irizar provided by the organization of Primavera Sound 2017.

Precisely Australians King Lizard and the Gizzard Wizard can’t be framed in the label "music for masses", but the expectation of seeing them for the first time in Spain and that label that accompanying them in recent months from the specialized press of spear head of the psychedelic rock scene, made that despite of being quite late the Primavera stage was quite crowded at the moment of their performance. Theirs was a sublime show, with very well marked times from the spectacular start with "Rattlesnake" and "Nuclear Fusion", a hypnotic intermediate phase with the various parts of "Alter Me" and "Altered Beast" and a final phase centered In Nonagon Infinity (2016) with "Robot Stop", "Gamma Knife" and "People-Vultures", which were the culmination of a great first day of Primavera Sound 2017.