After the broadly weak day of Friday, Saturday was the big day of Best Kept Secret Festival, at least as far as names are concerned it, with Death Cab For Cutie, The Vaccines, Ride and A$AP Rocky as "supporting’s" of Noel Gallagher High Flying Birds, big headliner of this edition. 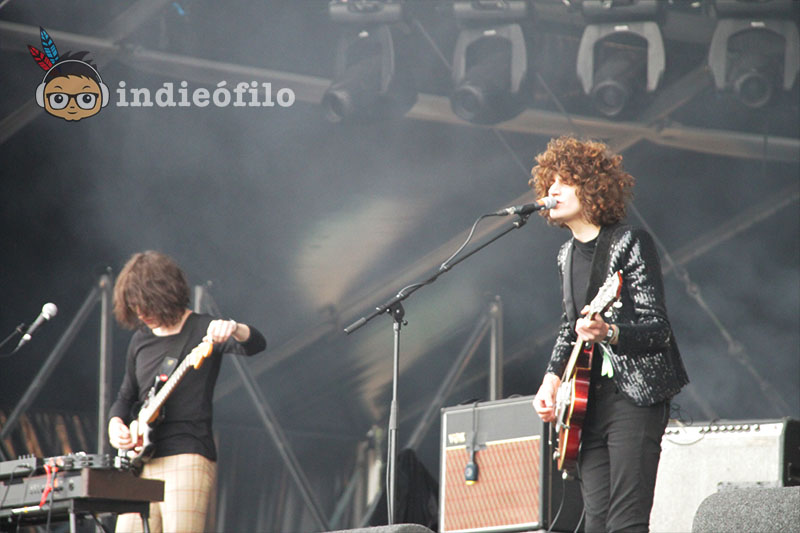 The early hours that acted two of the national bands of moment, Mourn and Hinds, did that we could not attending their concerts and our day started with British Temples. Banner of new English psychedelic rock, these youngsters drink of the best times of Pink Floyd, but in a much calmer and accessible version for general tastes. With a good sound in general, only their little interaction with the public and the break that supposed the presentation of the unreleased songs "Volcano" and "Henry's Cake" from their anticipated new work, made the final balance was not superb. The big surprise of the day, and even the festival, were the Americans St. Paul & The Broken Bones, who left us all with the mouth open because of their incredible show of soul and gospel. As if the game of cat and mouse it were, the band came on stage playing slow rhythms that made many crowd to march and later miss the radical change that experience the concert as soon as the singer entered in scene. Soul, Blues and Gospel elevated to full power, reminding to the youngers those styles that shocked them in The Blues Brothers.. Between stories about the past in churches of their singer Paul Janeway, we were able to enjoy with songs like "Dixie Rothko" and "Like a Mighty River", which made go crazy to a tent that once the concert finished walked away with a sense of having uncovered a wealth. 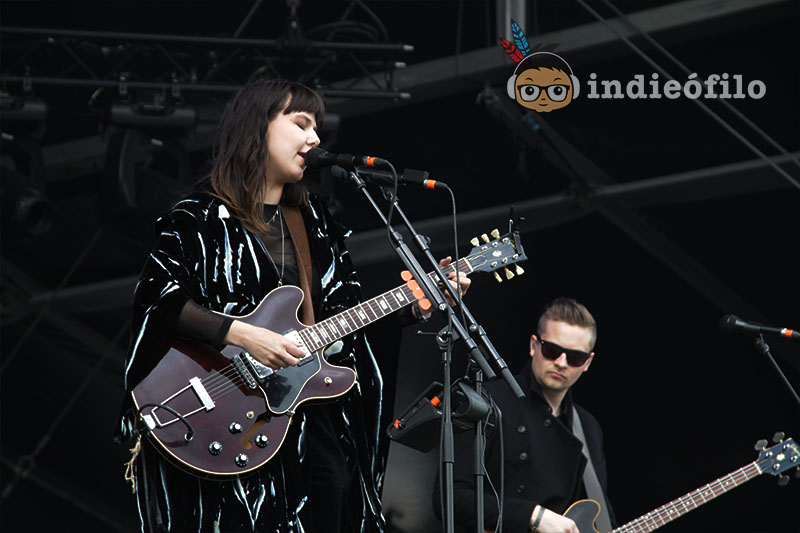 Perhaps this state of euphoria was a slab for Icelanders Of Monsters and Men, which offered a soporific concert on the main stage. With all the band wrapped in black clothes, was indifferent for us listen the songs from their new album or the rest of their discography, as overexposure of drums and kettle drum made that all songs sounded the same. For when it came their big hit "Little Talks" at the end of the concert, most of the audience had left to other proposals that accompany the few sunbeams of the day. After this dose of Restavit, an emotional but powerful proposal as Death Cab For Cutie was thanked, already without Chris Walla on guitar. Despite a spectacular concert start with "The New Year", "Crooked Teeth" and "Doors Unlocked", the show decays immediately as soon as they start to play the songs from their latest album Kintsugi, which is only slightly saved by the momentum of Gibbard's voice in the single "Black Sun". As rectify is wise, and the American band is plenty of experience , an excellent performance of "I Will Possess Your Heart" with Ben Gibbard at the piano in the instrumental parts, re-engage an audience that went crazy with the final trio "Soul Meets Body", "Marching Bands of Manhattan" and "Transatlanticism", closing a concert of over an hour in which we could enjoy a good sounding in general, and Gibbard's voice in particular that seems to dispel doubts about the quality of their live that appeared in the last tours. 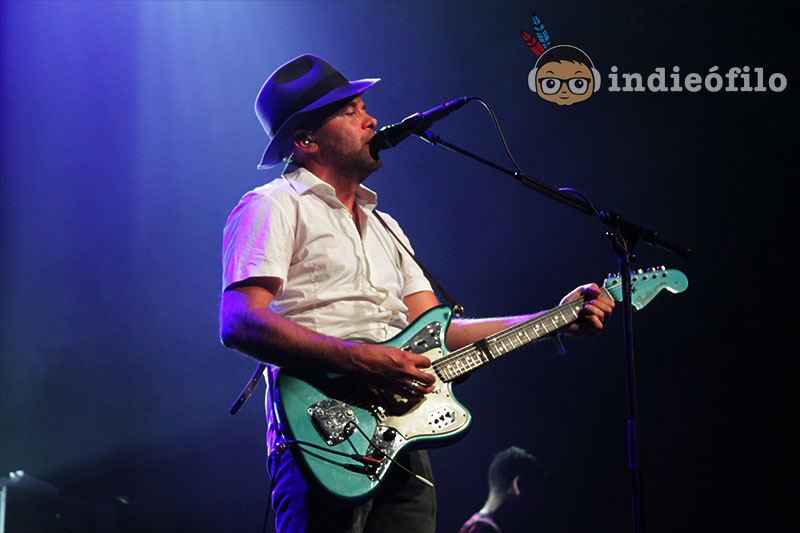 Slow rhythms and paused songs were again the protagonists on the main stage, where were the Belgians Balthazar. With a large fan base in Belgium and Holland, the band knows how to take advantage of the multiple voice style of their members (sometimes up to 4 voices at once) and the powerful presence of acoustic guitars and a violin smoothes the outfit. Of course, they couldn't miss their hits "Leipzig", "Bunker", "I Looked For You" and "Do Not Claim Them Anymore", so the final overview, without being somewhat exceptional was quite satisfactory. Fortunately for those who pull for more rock rhythms, would have to be the British Ride the ones who, on their reunion tour after nearly 20 years apart, put in this differential plus at the tent of the scenario 2. From the outset they showed their good state as a band with an impressive cover of about 10 minutes of "Leave Them All Behind", where the distortions and the stifling atmosphere of guitars and basses showed the best of shoegaze of the early 90s. The concert reached its peak in the fourth song of the repertoire, "Seagulls", from which ambient was gradually declining among minors songs and singer changes between Andy Bell and Mark Gardener. So when it rang near the end its success "Vapor Trail", their fans went suddenly crazy and formed an almost magical atmosphere who made that the orgy of noise with which ended their show, "Drive Blind", was one of those magical moments to remember the festival. We do not know yet if Ride are back to stay or just to raise the money of this tour, but even if it is this second option, when you can enjoy almost half an hour of rock that seems to be lost in the current times, It doesn't matter and you enjoy the gig as if there were no tomorrow.

The performance moments after of their compatriots The Vaccines on the main stage was a success, because they knew how to positively channel the whole atmosphere generated by Ride. With a repertoire full of hits that make dance and scream most of the public with astonishing ease, it was easy to predict the absolute success that the band got. However, in what looked like a bed of roses after the spectacular onset with the two songs with more punch of their new album "Handsome" and "Dream Lover", as well as their hits "Wreckin 'Bar (Ra Ra Ra)", "All In White" and "Wetsuit", the concert suffered a bump in the middle of the gig where Justin Hayward-Young even ventured with an acoustic version of "No Hope" that undercut in excess the warm atmosphere. There would be to wait for a grand finale with "I Always Knew", "If You Wanna" and hyper "Nørgaard" to return to enjoy their wildest version, the one in which the band feels comfortable and that converts any gig in a global party. The same party that just a few minutes would later began with a considerable delay at the tent of the scenario number 2. Upon a few first rows packed of Belgian and Dutch with an aesthetics much closer to the young people from Detroit's suburbs the collective A$AP Mob led by the world star A$AP Rocky, vented on stage their ferocious rhymes without the help of their usual set, that due to a logistical problem stayed in Belgium. We must recognize that when sounded their older songs like the classic "Wild for the night" or "Peso", the show reaches memorable points thanks to 4 voices synchronized to perfection, but when new songs are those who take the limelight, with no sense bases and rhymes on trivial topics, the concert loses its force. If we add a severed abruptly end without any sense, we left with the feeling of a disappointing and somewhat smaller show for the great prestige they bear. 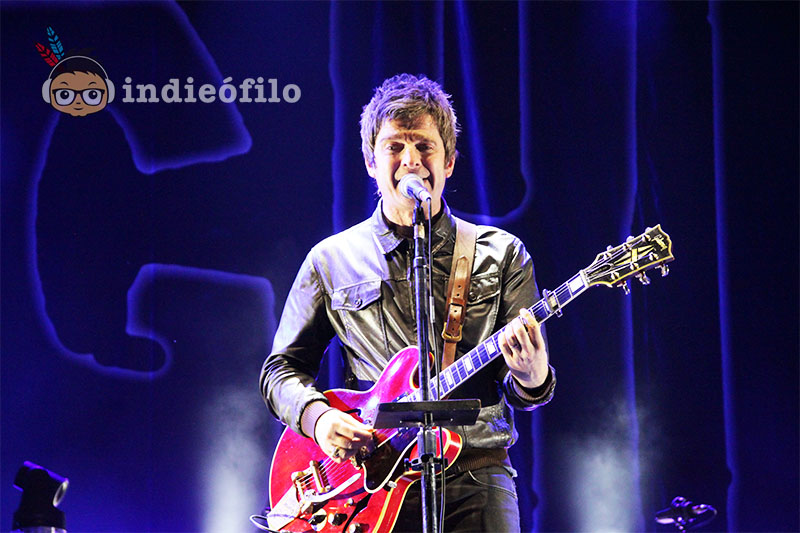 If last night the responsible for closing the main stage were one of the pillars bands of the Brit Pop as The Libertines, on Saturday it was time for one of the fathers of the movement, the Mancunian Noel Gallagher, who was accompanied by his band High Flying Birds, to hold a rally despite a bit disappointing concert. Part of the reason is Noel himself, who chooses to give a capital significance to the songs of Oasis which includes in his repertoire, thus looking down on the songs of his solo project. Thereby the crowd expects impatient the more widely known songs such as "Fade Away", "Champagne Supernova" or "Digsy's Dinner", promoting that the interest in most of the setlist is null, as if a remarkable career out of the band that gave him known were a simply filler. And that has no sense at all after the spectacular start where "Shoot A Hole Into the Sun", "Everybody's on the Run" and "Lock All The Doors" were chained, but excluding Oasis songs mentioned, most of the public chose to speak at length with music on the background as if it were in a nightclub. However, despite the ups and downs of the show, the end can only be classified as tremendous, due  to the spectacular "The Masterplan", which was followed by "AKA … What a Life!" (Probably the most direct song of NGHFB of the first album) and ended with a mass karaoke on "Don't lock back in Anger" for the enjoy of the public congregated.