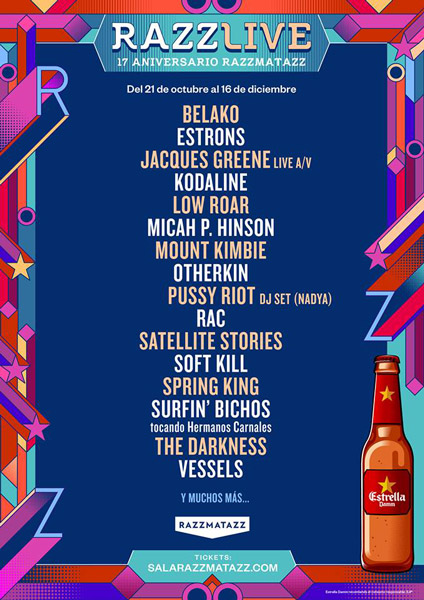 Mythical Barcelona's hall Razzmatazz will celebrate, as has happened in recent years, its anniversary during the last quarter of the year. For its 17th anniversary, the hall of the catalonian city has informed that the dates chosen will be between October 21 and December 16, in addition to announcing a first batch of names. In this first group of confirmations highlights the presence of the British The Darkness, who will present their new album on November 3, Spanish band Surfin 'Bichos playing in a full Hermanos carnales (1992) on October 27 or one of the sensations of the season, the American Low Roar, on October 24.

Other artists confirmed in this first advance are Kodaline, Belako, Micah P. Hinson, Satellite Stories (Which we already saw 6 months ago in Barcelona), Mount Kimbie, Estrons, Jaques Greene Live A/V, Otherkin, Pussy Riot Dj Set (Nadya), RAC, Soft Kill, Spring King, Trombone Shorty and Vessels. Tickets for almost all the announced Razzlive 17 concerts can now be purchased on the Razzmatazz Website with a variable price depending on the performance.