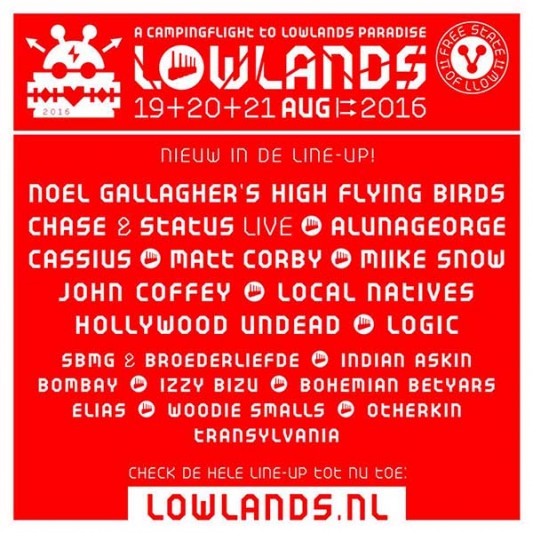 If on the last days of March we knew Jake Bugg, Warpaint, The Kills or locals De Staat were confirmed for Dutch Festival Lowlands 2016, today we've received a new batch of confirmations were highlight the name of Noel Gallagher's High Flying Birds. The band of one of the leaders of Oasis will be one of the headliners of the festival, just some months after offering a great show in the Heineken Music Hall few weeks ago. Other names confirmed on this batch are Chase & Status, Alunageorge, Cassius, Matt Corby, Miike Snow, John Coffey, Local Natives, Hollywood Undead, Logic, SBMG & Broederliefde, Indian Askin, Bombay, Izzy Bizu, Bohemian Betyars, Elias, Woodie Smalls, Otherkin and Transylvania, that will join on the line-up bands like Sigur Ros, LCD Soundsystem, Foals, Disclosure, Chvrches or The Last Shadow Puppets, among others, confirmed on the lasts months.

We remind you that tickets for the festival, that will be held in Biddinghuizen from 19 to 21 August, are available at its official Website with a starting price of 185 Euro.