Last weekend took place in Barcelona Primavera Club 2016, where we could enjoy some of the new names that are hitting hard in the independent international scene, together with already established names such as Minor Victories or Whitney. Our first contact at the day on Friday was the American Lucy Dacus, whose show was less rocker than expected in accordance to what is seen in her debut album No Burden. In concert with too many ups and downs, we keep the strength of her voice, as was seen on the wonderful "I Do not Wanna Be Funny Anymore". After her was the turn of their countrymen Public Access T.V. at [2] hall, whose sound closer to British punk-Britpop bands from the beginning of the millennium as The Rakes attracted a lot of audience. Theirs was a show full of energy that went wrong after 15 minutes and in which at times they remembered us to their idols The Strokes. 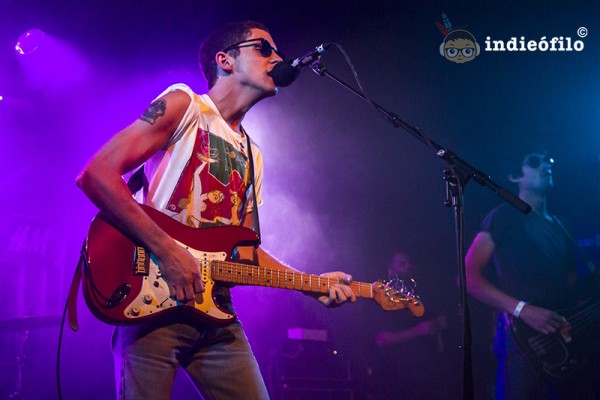 The main room offered us later the chance to finally enjoy New Zealanders Yumi Zouma, almost three years after their homonymous Ep full of electro pop that surprised magazines all around the world. Although their last 20 minutes were notable thanks to greater presence of synthesizers in the overall sound, the rest of the show was a constant disappointment, with an almost imperceptible voice of Christie Simpson floundering between an endless amount of disjointed sounds. Quite the opposite of the local Tversky in the small room, which offered an almost perfect concert in which the only issue was the short time they had. With an electro funk sound based on the wonderful bases of Xavier Paradis, that sometimes reminds you Afrika Bambaataa that on other points are closer to Daft Punk, the voice and saxophone of Alan Himar get merge seamlessly to give shape a duet that deserved to be followed closely over the coming years. 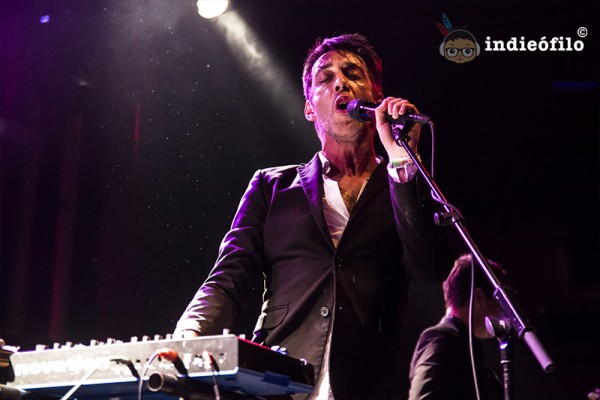 The highlight of the evening came with Canadians Operators, or in other words, the electronic project of Dan Boeckner, guitarist of the rockers Wolf Parade. Weighed down by a few problems with the sound dragged from an endless initial test, the concert was a roller coaster that did not collapse thanks to the power of Sam Brown on drums and in which highlighted "Control" as one of the great songs of the year. On the overall their sound lacked some darkness, being distant from primitive electro of Depeche Mode to get closer to closer to the danceable rhythms of Spanish bands like Grises..

Events of Saturday started with one of the bets from the Spanish label El Genio Equivocado,  Zamoran band El lado oscuro de la Broca. Despite a bad sound equalization that made almost imperceptible to listen the two main voices, in musical terms we we enjoyed a noise-shoegazee band with great presence of drums and bass, clearly influenced by Mogwai or My Bloody Valentine. Behind them, the small room was packed to the rafters for the Australian Alex Cameron, undoubtedly one of the big winners of the day. Between continuous jokes and speeches with his saxophonist Roy Molloy, the Australian disguised as a modern crooner to delight us with some songs of his debut album Jumping the Shark and to prove that his style that seems the perfect mix of eighties Bowie and his compatriot Nick Cave deserves to have a place in the 2017 festivals. Additionally, it will remain as one of the moments of this edition due to his spasmodic-sensual dances.. 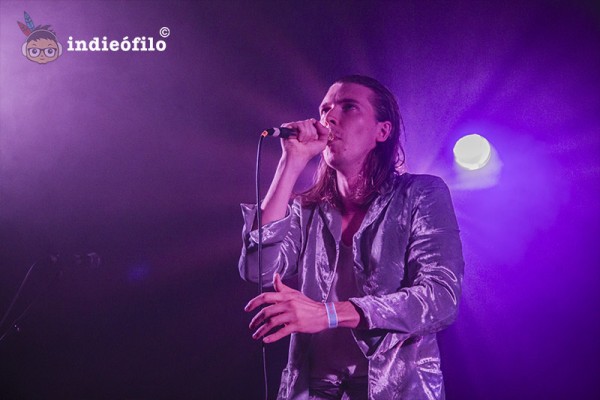 Like a bucket of cold water arrived the proposal from the Ecuadorian based in New York Maria Usbeck, whose minimalist electronic pop didn't leave a mark on a main room which began dancing faced with her colourful proposal and a strange version of "Cállate, niña, no llores más" from Janette, but which was emptied in a quick way.. Better fate had the local Retirada! on La [2], as their post-rock with experimental tints that at times resembles Toundra or veers toward Mogwai, was a great success, going from low to high and showing that the tracks of the new album Victòria/Derrota sounded better live. The big disappointment of the day come moments later with C Duncan, as the subtle proposal mix of dream pop and electronics of the Scottish was reduced on Saturday night to a disjointed hodgepodge of instruments that only seemed to sync on the last songs. Quite a shame, because his latest album The Midnight Sun is full of delicate landscapes that could be signed by the incredible James Blake. 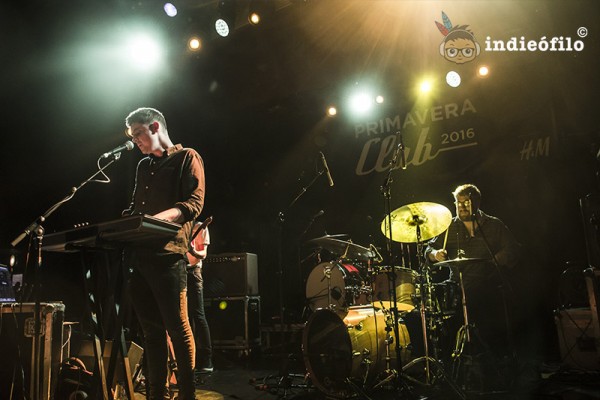 Luckily our dear Pauw elevated again the level moments later. Before a crowded room that freaked with the psychedelic rock of the 70s of the Dutch guys, the band from Twente vented all their power getting even to saturate some monitors in the early songs. For those that usually we have had a chance to see them in the Netherlands in the past two years, their great performance was not a surprise and surely that in the coming years we will hear a lot about them.. 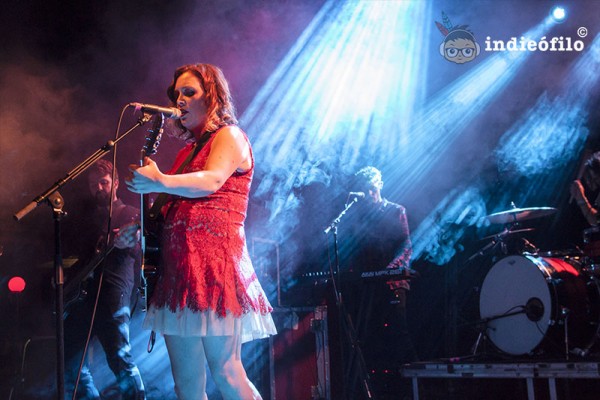 Their show would be a perfect advance for the great name of the festival, super indie band of the moment Minor Victories, made up of members by Slowdive, Mogwai and Editors. With better syncing than we could "enjoy" more than 4 months ago in the Dutch festival Best Kept Secret, the band offered a solid concert supported by the drum beats, and above all, on the strength of Stuart Braithwaite. The Scottish looks like a a caged beast during much of the songs of the band, and it is precisely when it breaks out and appear the asphyxiant atmospheres typical of the post-rock when the proposal of Minor Victories jump into the next level, because in this global epic is where the beautiful voice of Rachel Goswell finally shows all its potential. We emphasize the strength of songs like "A Hundred Ropes", "Breaking my Light" or "Scattered Ashes", that delighted the audience and proved why the sole presence of Minor Victories it was more than ample reason to attend the festival..

The last day of this year's Primavera Club starts with the Catalan trio Yumi Yumi Hip Hop and their pop pills that quickly made dance to all the small hall of Apolo. With a style that at times reminds to The Pastels, but more accelerated, theirs was one of the moments of the night with the cover of "Calgary 88" from Antonia Font that they made in the middle of their show. With almost no break was the turn of the also Catalan Gúdar in the main room, and once the initial shock that usually cause for which ignores the peculiar voice of their singer Albert Espuña was over, they gradually gained the public who finished dancing and even jumping on some of their songs like "La nueva canción". 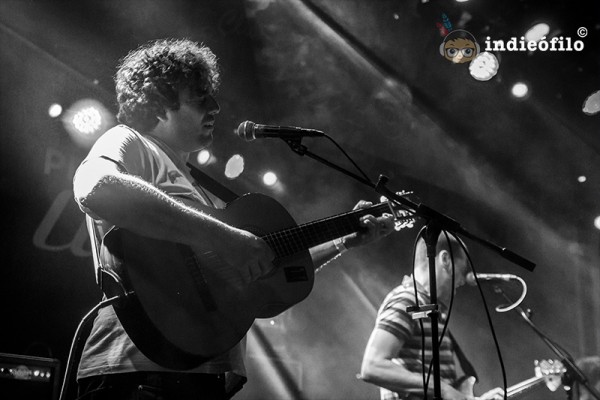 The day was advancing and more and more people were filling the halls of Barcelona venue to enjoy the big names of the night. One of them must be Alexander Brettin and their Mild High Club, but their show was one of the great disappointments of the festival. The psychedelic & dream pop of their acclaimed second LP Skiptracing, was relegated to the background before the apathy and little strength of the Americans, who wiped that taste to Ariel Pink's Haunted Graffiti to end up being a mere copy of music for elevators.. To our luck, the big headliner of the day, their compatriots Whitney quickly cleared away the bad taste with an almost perfect show despite the blatant weariness of his drummer and singer Julien Ehrlich. Nevertheless, the leader of the band did not cease to interact with the audience throughout the concert, and under the great influence of the sound of the trumpet of his teammate Will Miller, offered a show in which performed almost entirely the album that gave them fame, No Woman, also delighting us with a cover of “Tonight I'll be Staying Here with you” by Bob Dylan and ending the show at the top precisely with the hit that gave name to their album.

The festival was coming to an end and those in charge of closing it would be also American Porches, whose last album Pool have turned into a pop style closer to the dream or the R&B and have forgotten those rock glimpses of their album debut. Their live never seemed to start up, although in musical terms there was not so much to blame, but excessive shyness of singer Aaron Maine detracted a cold concert that defrauded according to the expectations that had much of the public.So correct edition in general terms, which left us the great concert of Whitney and the chance to enjoy live a band like Minor Victoires, with Alex Cameron and Tversky as names to follow in the future, but in which it was not possible to discover as many surprises as in previous years because the ones that must pull out all the stops as Porches or Yumi Zouma, have defrauded completely.