In the midst of a heatwave that turned Barcelona into a grill for a few days, the 24th edition of Sónar was held, with Moderat, Justice or Masters of Work as claims of its nocturnal side and Arca, Joe Goddard and Fat Freddy's Drop as big names of Sónar by day. 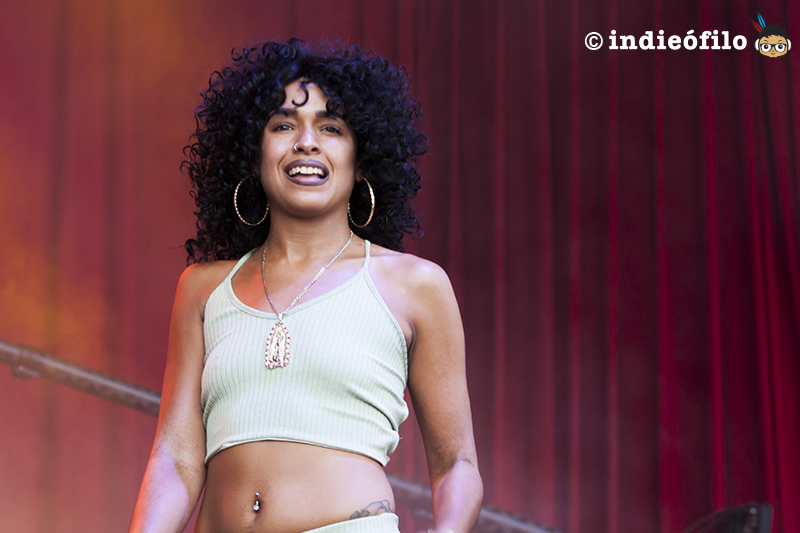 The first day of the Sónar Day 2017 had as its first big name Princess Nokia, who despite starting their concert with more than 40 minutes of delay was able to having the public in her pocket with a spectacular start thanks to "Tomboy", in which he even jumped to the public to sang part of a theme while doing crowdsurfing. The problem is that after 10 minutes her show loses all interest due to extreme monotony and the excess of samples and prerecorded vocals.. Only when Destiny Frasqueri mooned the public or the rhythms of "Dragons" took us out of the generalized sleepiness. Thankfully, Malaga's duo BSN Posse offered us an almost instantaneous high with their set on stage XS, the smallest of the venue that showed a rather deplorable sound quality. In 30 minutes we were able to listen to dubstep, funk or hip hop bases that evolved into footwork, demonstrating why the duo is one of the greatest Spanish hopes in the electronic scene. 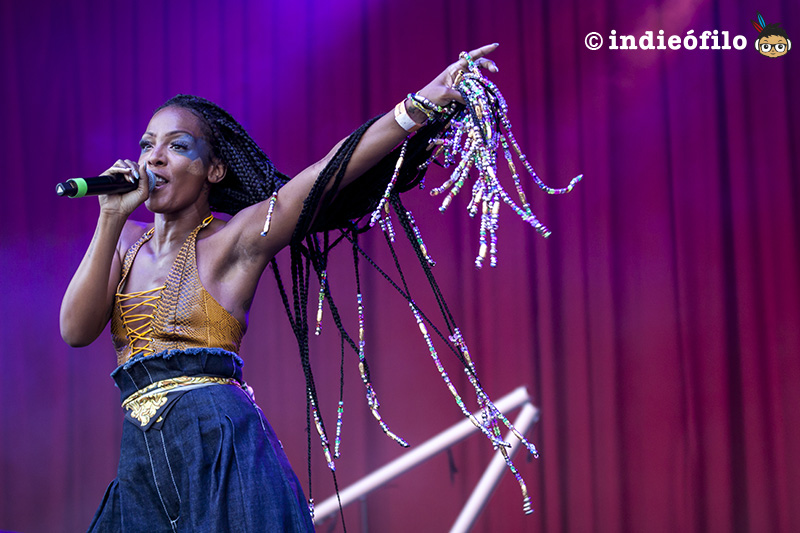 Another of the great claims of the day was the American DAWN, who with two LP published and accompanied by a spectacular staging thanks to her endless braids and 2 b-boys, put the audience in her pocket with her mix of R&B and Pop in the style of FKA Twigs. The trouble is that, as in the case of her predecessor, the excess of prerecorded voices weigh like a ton to really weigh a ton what it is that the New Orleans can show. Taking advantage of that fake sensation of her songs, we moved back to the Sonar XS to suffer the grotesque show that Yung Beef was doing. A general nonsense in which both the Granadian and the rest of the MCs that appeared on stage didn't stop screaming, stopping songs in half or leaving the stage when they wanted, all done at a speed that gives you the feeling to be living at times a punk performance more than a concert of Trap and reggaeton. We can not avoid our mentality of very old grandparents to think at what moment this "show" can be considered something remarkable .. 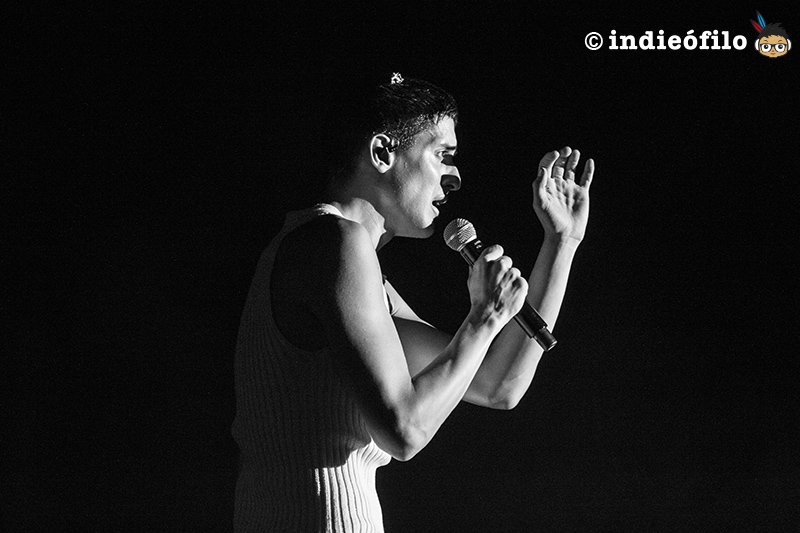 After the down we had the up with the Norwegian Prins Thomas, who offered a cheerful and colorful session. Between beers and cigars, the Scandinavian same launched the reggae of Eddy Grant in "Walking On Sunshine" that jumped to house or techno with astonishing ease. His closing time with Alkalino was one of the moments of the day. Although the great winner of the day was going to be the Venezuelan Arca, that beyond his bizarre mise-en-scène with BDSM touches, he proved his status as a world star. Alejandro Gershi, with his inseparable Jesse Kanda in charge of some visual controversies that even included visuals of fist fucking, mixed perfectly his divo poses, his broken bases that reach the innermost part of your body and voices that approach the operatic tones to present a perfect proposal based essentially on his latest album. For the book of great moments in the history of the festival will remain the concatenation of "Desafío", "Reverie" and "Coraje", great culprits of the closed ovation that the South American took at the end of the show.

The second day of the festival started for us with the Frenchman Jacques, a mix between Matthew Herbert and Jerry Lewis in "The Nutty Professor" that gave one of the best sessions of this edition of Sónar by day despite a couple of problems in the form of cuts. Among flags of invented countries and dressed in colorful shorts and shirt, the Parisian offered what he calls "transverse techno", built from loops and bases created with all kinds of objects that manage to create melodies that navigate between pop and electronics with astonishing ease. So, we saw him recording the sound produced by the bounce of a ball, a ripped plastic, a scream, a guitar solo, the noise of scissors, and suddenly, as masterfully guided by a guru, the session takes off with a hype to catch you during almost an hour.

Although if we have to talk about electro-pop, the great name of the day was that of the German Marius Lauber and his Roosevelt project, playing on this occasion in band format with the help of an extra keyboard player. After his visit to Barcelona in the past Primavera Sound, the Teutonic offered a similar concert full of eighties rhythms and hits like "Colors" or "Moving On", as well as a nice cover of "Teardrops" by Womack & Womack to an audience eager for danceable rhythms and, above all, some shades that cover them up from the stifling heat of Barcelona's afternoon. Another of the big names of the day would then come on Sónar Hall stage, where Evian Christ was going to give one of the few sessions planned for this 2017, where he will publish his expected new album in Warp. With a brutal bass volume that made almost mandatory the use of plugs and lights capable of causing an epileptic attack in just a moment, the Englishman started the session with his well-known "Fuck It None Of Ya'll Don't Rap", to later honor Robert Miles with an accelerated version of "Children" and also fill in his session with grime and trance. 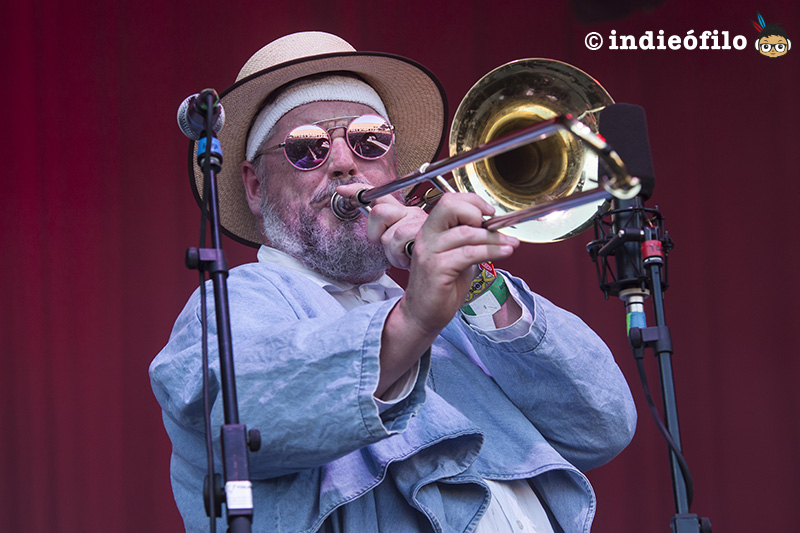 Those who did not opt for the British had in Sonar XS one of the Spanish claims of this edition, the Barcelona's singer Bad Gyal. In the line of Yung Beef the day before, her sound left a lot to be desired, although that did not matter to a legion of fans who did not stop singing all their songs, although the level of vocalization of the Catalan was very poor. We do not know if what she does is trap, dance hall or hip hop, but during much of the show the greatest incentive was in her DJ, absolute creator of hypnotic rhythms and bases that made you forget about the vulgarity of lyrics and dances that were on the stage. Thankfully, the New Zealanders Fat Freddy's Drop would take away the bitter aftertaste with their ska and reggae mix in which highlights an incredible winds section, especially the trombonist Joe Lindsay aka Hopepa, able to cheer up a funeral with his presence on stage. Between songs of their last album Bays (2015) and their incursions into dub or funk, the tent became a continuous celebration in which absolutely everybody was dancing. 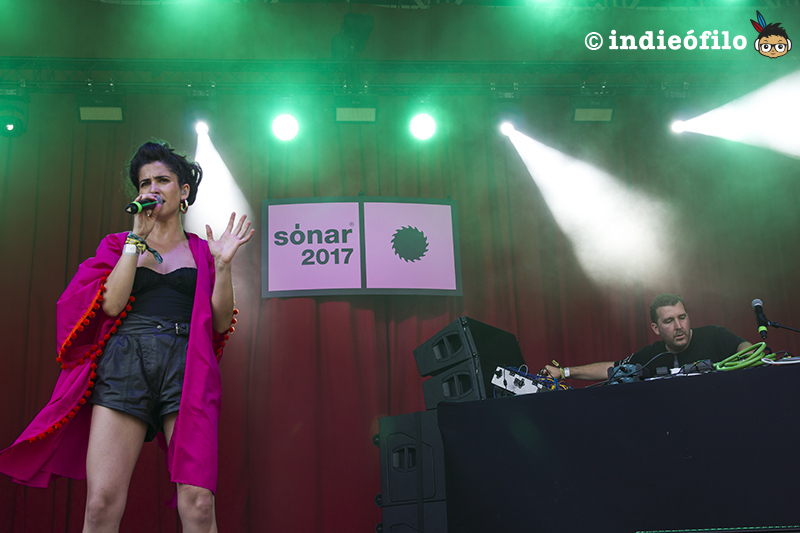 The last day of Sónar 2017 started with one of the biggest claims of this edition, Joe Goddard, founder and thinking mind of Hot Chip. With the big help of Valentina Pappalardo in some songs, his concert was halfway between a session and a concert, bringing us some dispensable passages because of their monotony. Despite this, and only because of his samples of James Brown, the small tribute that was made to "Music is the Answer" by Celeda and Danny Tenaglia, or songs like "Human Heart" or "Gabriel" his set was already worth it, although as he himself would affirm at the end of his set, he apologise for any problem standing by that he had a terrible headache. 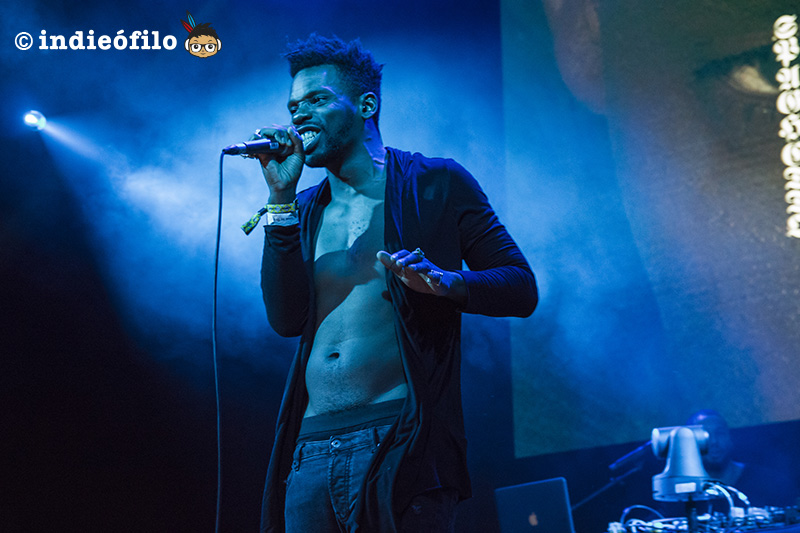 Running to the Sónar Dome we arrived on time to enjoy the start of the concert of the British Gaika, who with a sober and powerful show dazzled us in the first moments. However, his abuse of vocoder and autotune made that the initial surprise become routine, camouflaging sounds that walked with mastery between trip hop and dancehall. Unfortunately, the great Spanish bet of the day was not going to come off very well, standing before a crowd of fans who did not care about the music that sounded or the quality of the sound, since they only cared to screech before the simple rhymes of C.Tangana. With the acronym of Agorazein dominating the stage and Fabianni launching the bases, his show was a solo performance with continuous appearances by his collective colleagues, where songs like "Nada" or "Los tru" unleashed the madness of hordes of young people who seemed to be living the mystical experience of their lives.. When the musical seems finally to gain the battle with "C.H.I.T.O" or "100k pasos", the vulgarity is again the protagonist with three dancers who wiggle despite the destruction that Madrid's guy performs in "Antes de morirme", where the prerecorded voices of Rosalía disappeared between the screaming, or the nonsense of "Mala mujer", where the dancers gave the finger to the singer every time he sings the chorus. Sónar 2017 tried to promote the Spanish trap scene, a style in which none of its stars want to be pigeonholed, and despite the fervor of the young crowd, does not manage to get between a majority of the public that is often scared after get in touch with it without understanding why it is so famous nowadays.. 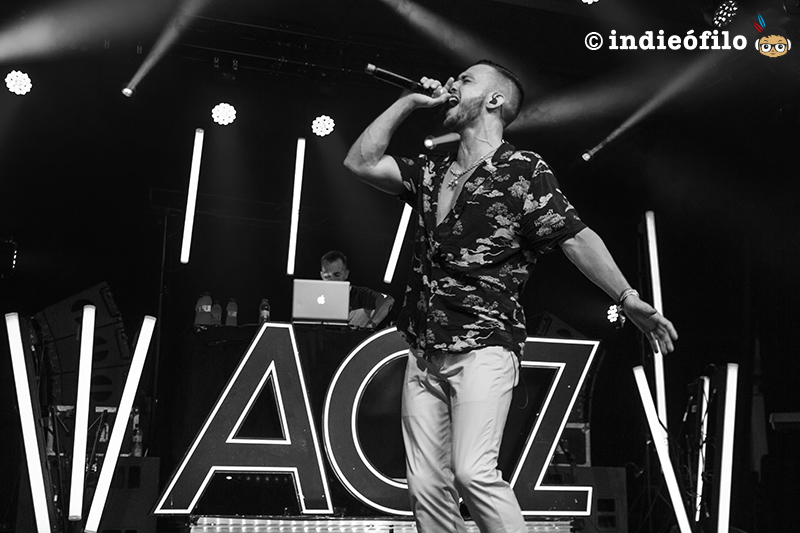 Our farewell to the venue of Fira de Montjuic would arrive with the duo of Nosaj Thing and Daito Manabe, who a few months ago were at Caixa Forum of the Catalan capital, and despite this they filled Sonar Hall with their new audiovisual show. The sounds between techno and hip hop of the American were the guides of a great show that amazed everyone for about 45 minutes, accompanied by 360o images or black and white compositions. A real shame that in the final moments of their show there were several technical problems that tarnished the final result, since theirs was going to be one of a few shows that are remembered over the years.