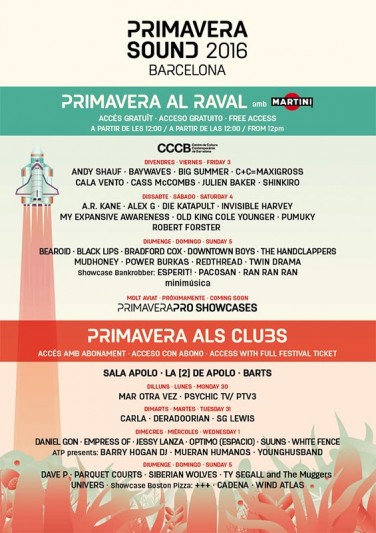 Primavera Sound will bring a complementary programme to Raval's neighbourhood, just in the heart of Barcelona. A large number of concerts will be held in the emblematic Centre de Cultura Contemporània de Barcelona (CCCB), where will be three stages on which around 70 artists and bands will perform over the first weekend in June during the daytime. Among the bands that will be at Primavera al Raval we can find grunge's American band Mudhoney, the former frontman of The Go-Betweens, Robert Forster, the solo show by Bradford Cox or the garage madness of the Black Lips. As always, the programme will be complemented by a significant local representation made up of Die Katapult, Invisible Harvey, Big Summer, Shinkiro, Redthread and Twin Drama, who will be accompanied by other names from the national scene such as the Madrid band Baywaves, Bearoid from Valencia, the Girona bands The Handclappers and Cala Vento, Pumuky from the Canary Islands, Zaragoza band My Expansive Awareness and Power Burkas from Vic.

The spirit of the festival will spread to the concert venues of Barcelona with Primavera als Clubs. Apolo, La [2] de Apolo and BARTS will host the live performances the whole week like the mythical Psychic TV/PTV3, Ty Segall and The Muggers, Empress Of, Suuns, Deradoorian or Parquet Courts, as well as the stage comeback of the legendary Mar Otra Vez, noise pop from Univers or the powerful rock of Siberian Wolves.