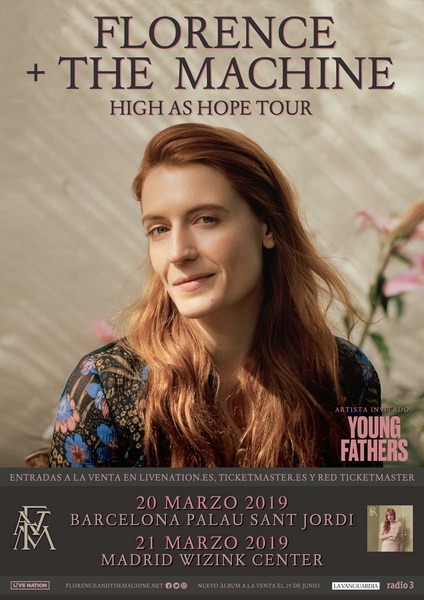 ust one week after her concert at the BBK Live 2018, Florence Welch has confirmed two new shows in Spain for March 2019. On Saturday, on the screens of the main stages of Mad Cool 2018, it was announced that the British artist would return to Spain, and today Live Nation has confirmed that the concerts of Florence + The Machine will take place on March 20 at Palau Sant Jordi in Barcelona, and a day later, on March 21 at WiZink Center in Madrid,  with Young Fathers as supporting band presenting their new album Cocoa Sugar (2018) in both shows.

Tickets are available at Live Nation, Ticketmaster and ticketmaster network (FNAC + Carrefour + Halcón Viajes) from €46, €68.5 stand tickets and up to €90.5 for the golde ring ones, in all cases with fees included.