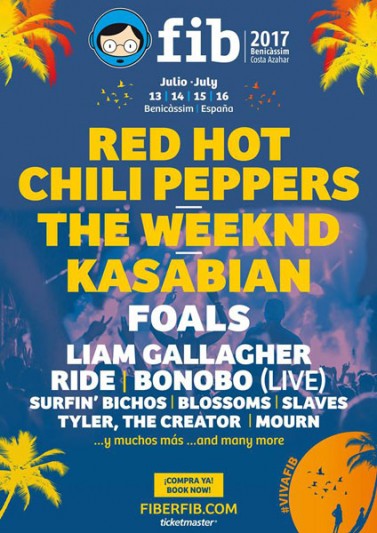 Almost a month after confirming The Weeknd and Foals, Spanish Festival FIB 2017 has just announced a new batch of names for its line-up. On it highlights especially British Kasabian and Liam Gallagher, both with a new album to be published in the coming months, and American Tyler the Creator, ne of the current stars of Hip-Hop that will play for the first time in Spain. The rest of confirmations includes the mythical RIDE, along with some of the most acclaimed bands by critics of 2016 like Slaves, Bonobo and Blossoms or Spanish bands MOURN and Surfin' Bichos.

We remind you that 4 days tickets for the festival (with 8 free days of camping at Campfest), which will be held from 13 to 16 July, are still available at the official Website of the festival with a promotional price of € 120 (+ booking fee) until next January 31.