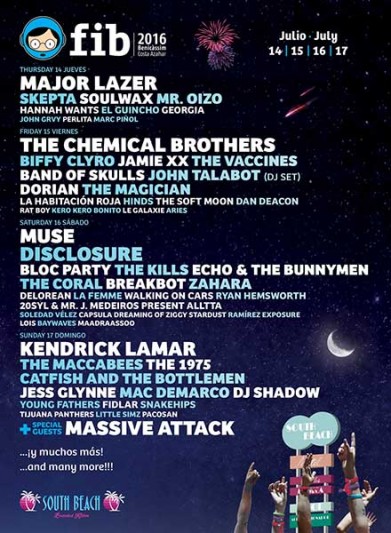 After confirming The Kills or Soulwax on the first days of April, FIB 2016 has confirmed ten new names for its lineup, that already includes Muse, Kendrick Lamar, The Chemical Brothers or Major Lazer, among others. On this new batch highlights British band Band of Skulls, that will present their awaited fourth album By Default, as well as their countrymen Echo and the Bunnymen, that although they don't release an album since 2014, are on a world tour this year. The rest of the news confirmed are Dorian, Breakbot, The Soft Moon, Capsula: Dreaming of Ziggy Stardust, Tijuana Panters, John Grvy, Pacosan and Maadraassoo.

We remind you that tickets for the festival, which is held in Benicassim from 14th to 17th July, can be bought at the official Website of the festival with a starting price of 147.50€ (+ fees) for the 4-days ticket with camping included.