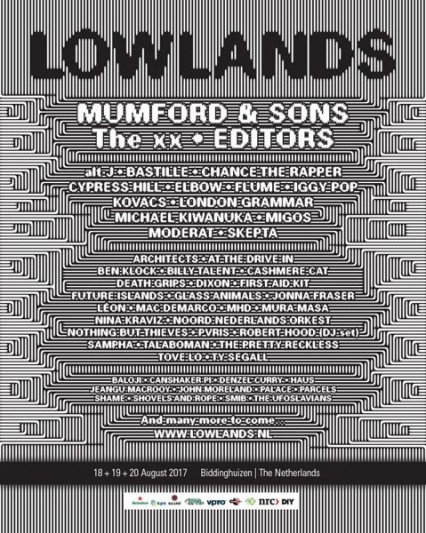 Almost a month after a second round of confirmations that included Bastille, Cypress Hill, London Grammar or Future Islands, among others, Dutch festival Lowlands 2017 has announced new bands that will be part of its Lineup this afternoon. In this new batch of confirmations highlight the names of At The Drive-In, which will present their awaited new album, Death Grips, Skepta or The Pretty Reckless, together with Migos, Kovacs, First Aid Kit, Jonna Fraser, LÉON, MHD, PVRIS, Sampha, Canshaker Pi, HAUS, Jeangu Macrooy, John Moreland, Parcels, Shovels and Rope and The Ufoslavians. As if that were not enough, the band of Cedric Bixler-Zavala and Omar Rodríguez-López play a dirty trick to the organization and have uploaded on their Social Network profiles a photo of the Lineup (the one accompanying this news) in which they have also confirmed to one of the most prestigious rappers of the last years like Chance the Rapper, joining thus an impressive lineup were you can find The XX, Mumford & Sons, Elbow, Editors, Alt-J or Iggy Pop..

Tickets for the festival, which this year celebrates its 25th anniversary and that will be held from 18 to 20 August at Walibi World in Biddinghuizen, are already on sale at Ticketmaster with a total cost of €195.