After a remarkable first day, Cruilla Barcelona 2016 opened the door on Saturday with the concert by Xoel Lopez. Against a blazing sun that almost forced to look for the few gaps of shadows (Bravo for the two rows of brave people who standed at the sun!), Galician offered a fun and full of tropical touches show in which he focused on the themes of his last album Paramales, highlighting for their warm welcome into the public "Ningún nombre, ningún lugar", "Almas del norte" and "Yo solo quería que me llevaras a bailar", interspersed with some safe bets from his previous album Atlantico as "De piedras y arena mojada" or "Hombre de ninguna parte". Just a few meters away we found one of the pleasant surprises of this edition, the Brazilian Emicida, that with his calm hip hop rhythms in which highlight some incredible funk and bossa nova bases, caused a good impression to the small audience that were at Radio 3 stage. 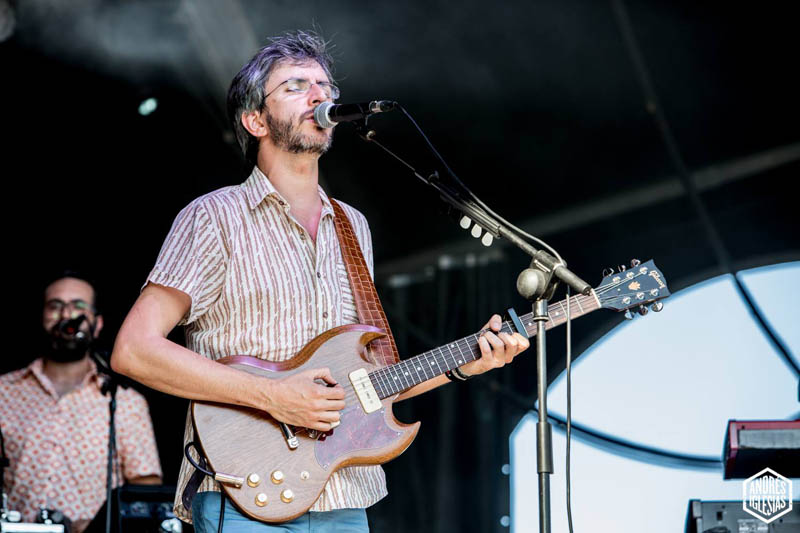 Photo made by Andrés Iglesias and provided by Cruïlla Barcelona 2016.

Undoubtedly the shadow of the great main stage was a desirable claim for a lot of young people who came to the concert of Mancunians James without really knowing what their style was.. Their surprise, according to the big applause they bringed to the band at the end, was high and certainly the show given by their singer Tim Booth was the main reason. Whether swimming in a sea of people, with their jerky movements or even joking when people clapped the introduction of a song dedicated to the death of his mother ("Are you clapping the death of my mother?"), The British got in the pocket an audience that only seemed to recognize their hit "Getting Away With it", that was just the first song of the concert. It was a pity that their concert will overlap with the one of the granadinos 091, one of the comeback that we had more desire to watch and that we could only enjoy just over half of it from the stands. The good shape of the Andalusian is a fact, and despite the low mobility of their leader Jose Antonio Garcia on stage and the excessive volume coming out from the speakers, we were able to enjoy some Spanish classics of the 90s as "El baile de la desesperación" or "Tormentas imaginarias". 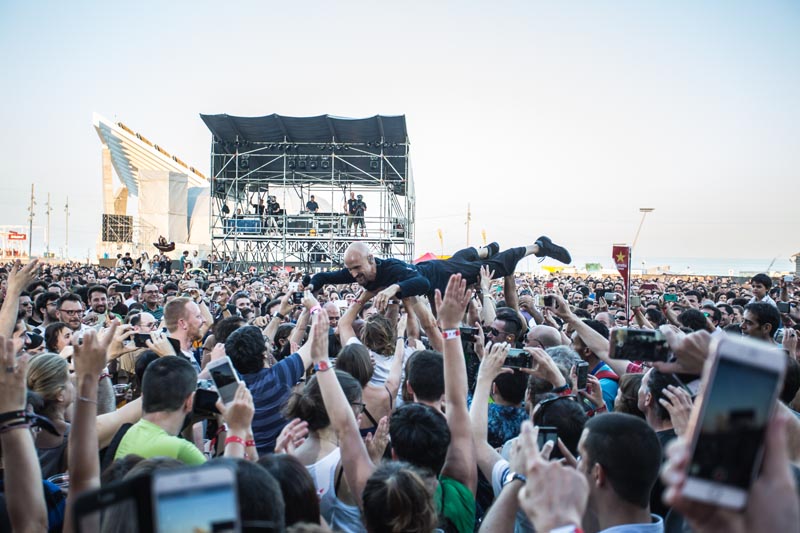 StubHub stage became again too small for Alabama Shakes gig, whose fame inflated a well deserved hype about their live show and attracted guys from all kinds of trends. With Brittany Howard demonstrating to those that were unfamiliar with her that it is not merely a charismatic and photogenic "frontwoman ", but also a spectacular voice, we enjoyed a great time with "Future People",  "Gimme All Your Love" or "Do not Wanna Fight", going from euphoria to emotionalism in just seconds and offering without any doubt the show of the festival. And don't forget that they had it really difficult because then was the time for the great name of the festival, the leader of Led Zeppelin Robert Plant and his band Sensational Space Shifters, the special name for which much part of the public had pay the ticket as evidenced by the huge number of T-shirts with the logo or face of the legendary singer on it. Personally I can only describe his concert as disappointing, not because of by the effort of English singer or the quality of the band members (Incredible the Gambian Juldeh Camara playing nyanyeru), but due to the sound of the show in general. The small presence of the instruments in favor of highlighting a voice that no longer reaches the tones of the past, caused that the initial "The Lemon Song" and "Black Dog" remained quite far from the original style, showing what would be a trend throughout the whole concert, Plant can not detach his hits with the band that gave him known, but the adaptation to the sound and style of his new band eliminates any trace of strength and power from the original version.. It is true that the concert got better as soon as appear in the setlist songs from his last two LPs, as demonstrated in "Rainbow" and "Little Maggie", in the same way that "Babe I'm gonna leave you" or ending medley with "Whole Lotta Love" and "Rock and Roll" gave goosebumps, but the overall of the concert leaves a bitter aftertaste of a wannabe due to the lack of definition in styles between the traditional and most authentic rock. 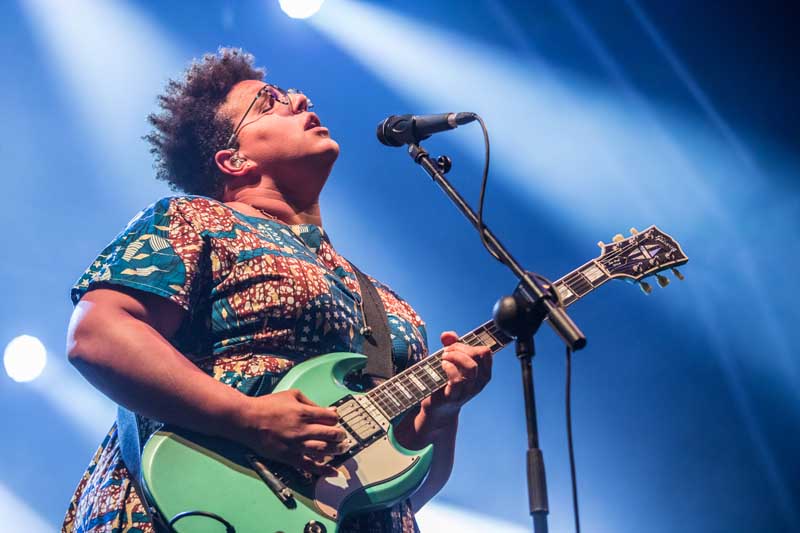 Love of Lesbian were the next ones in the second stage, and although everyone seems to have seen them live and do not stop complaining about their presence at festivals, they still fill up wherever they play. For this humble servant, exiled like I'm in the Netherlands, the concert was the first opportunity to analyze live their new album El Poeta Halley, and accompanied by some good projections (Great lessons of grammar!), they really convinced with a big presence of new themes. The spectacular start with "Cuando no me ves" and "Bajo el volcán" gave way to a number of recognized songs from their past as "1999", "Si tú me dices Ben, yo digo Affleck" or "Algunas Plantas", to return later to the most danceable songs in the final rouge as the recent "I.M.T.", "El yin y el yen" or the inevitable "Club de fans de John Boy".. The end with the melancholic "Planeador" downgraded the general euphoria and left a strange distaste, perhaps because the atmosphere was relaxed too much against the festive atmosphere that had the rest of their show. 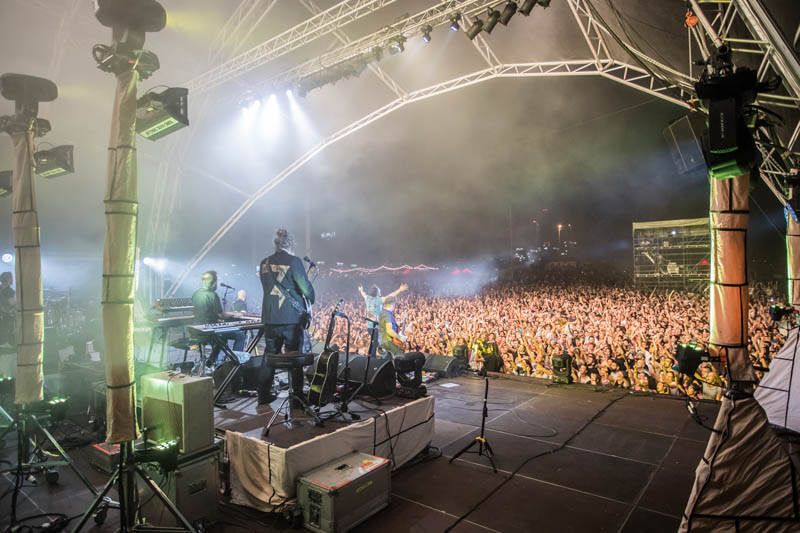 As we had seen Skunk Anansie few months ago at Paradiso in Amsterdam, we listened only the first songs of their show (He dedicated "God Loves Only You" to the fascist "Nigel Farage, Marine le Pen and fucking Donald Trump" and also joked about the Brexit ( "We have decided to stay in Europe") to give a chance to the French-Chilean Ana Tijoux. Despite the reputation that goes with her, the show was the biggest disappointment of this edition, with a bad synchronization between music and lyrics, and where the singer only seemed to focus on throwing political proclamations instead of solving the more obvious problems of rapport with the musicians. Neither the final presence on stage of Fermin Muguruza or Amparanoia achieved to fix the mess.. 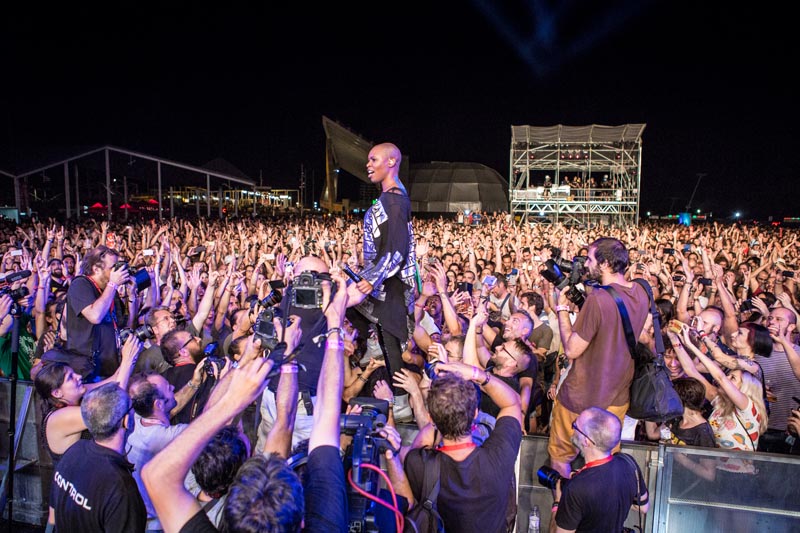 So, good edition in general terms of Cruilla Barcelona 2016, where Friday won by a far to Saturday thanks to the shows of Bunbury, Damien Rice and Vetusta Morla, and where Americans Alabama Shakes were the absolute kings of the festival thanks to their great show that will remain in our memory for years. With the dates for the 2017 edition already confirmed (7th and 8th July), we started to count the days to enjoy again one of the most varied and for all audiences festival of Spanish scene.