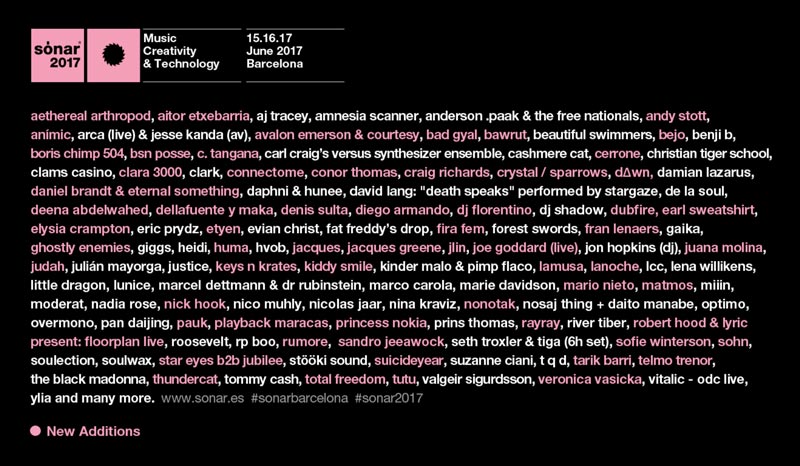 If last January, Spanish festival Sónar 2017 has announced a new batch of names that had DJ Shadow, Anderson .Paak & The Free Nationals or Soulwax as main lures, yesterday afternoon they released up to 60 new names that almost closed its lineup. Among those names stand out Sohn, Thundercat and Clara 3000, the new sensation of New Yorker hip hop Princess Nokia, the experimentation of Elysia Crampton or the presence of some of the figures of the new Spanish hip hop scene as Dellafuente+Maka and C.Tangana. In addition, SonarDôme programming by Red Bull Music Academy has also been closed with the incorporation of Marie Davidson, RP Boo or River Tiber, among many others, while a new scenario has been announced, Sónar XS, which will be located inside at Sónar Día and that was born with the aim of giving visibility to young talents, and to propose small shows of unconventional sounds like Reguetón, Dancehall or Trap.

Tickets for the festival, which will be held from 15 to 17 June in Barcelona, are now on sale at a price of €180+fees for the full ticket, €270+fees for the VIP ticket and €125+fees the ticket that includes two nights, in a promotional campaign that will end next May 11.