After the successful edition of 2017, where we've enjoyed emerging bands like Superorganism, Gabriel Garzón-Montano or Yellow Days, the people of Primavera Sound have just announced the dates for the Primavera Club 2018, which for the third consecutive year will be held simultaneously in Barcelona and Madrid, from October 26 to 28.

Among the amalgam of names, among which we did not find prominent headliners in the emerging panorama as in previous years, we recommend the shows of the extravagant Serpentwithfeet (with a style that has been compared to Frank Ocean or Anderson .Paak), rock of Snail Mail or the proposal close to the punk of Louder Than Death. Also we find bands that have been highlited by BBC, Pitchfork or The Guardian in the last months as Tirzah, Jess Williamson, Jimothy Lacoste, Ama Lou or Volruptus.

The other names of the lineup, to close the 46 artists present in Barcelona and the 26 in Madrid, surely will bring us endless surprises, and the opportunity to say that "I saw them before, when they were not so well famous.." As last year, the concerts were held at Sala Apolo (Main room, La [2], Nitsa and Astin) and at Centre Cultural Albareda in Barcelona, ​​while in Madrid, the venue chosen was Teatro Barceló. 3 day Tickets for Primavera Club 2018 are now on sale at Redtkt and Ticketmaster at the price of €25 + fees, while day tickets are priced at €15 + fees. 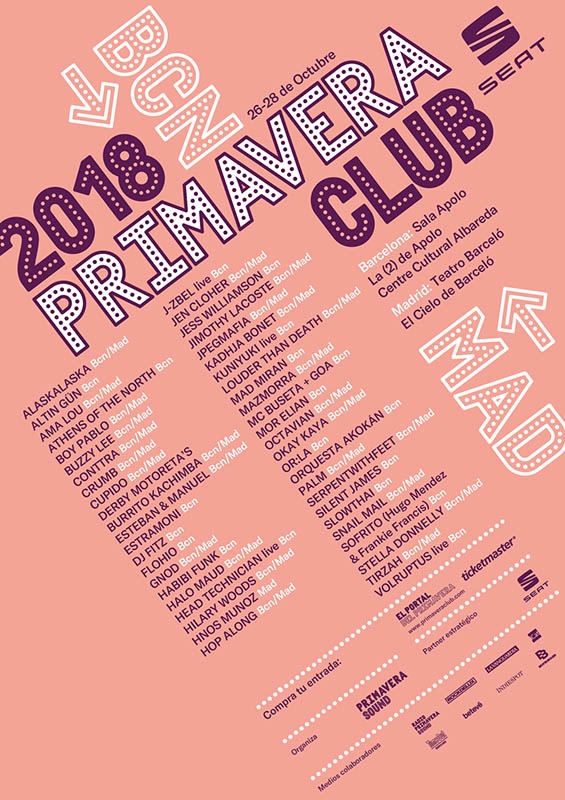