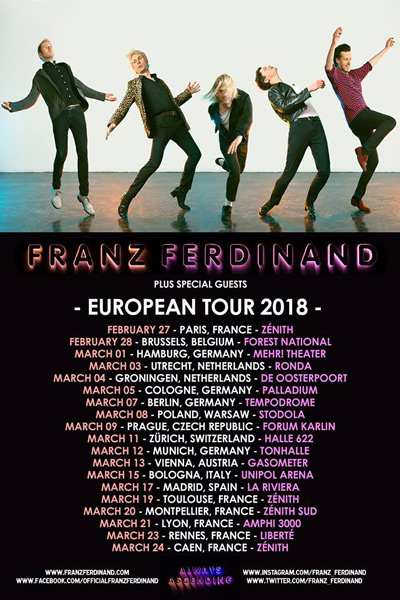 Scottish band Franz Ferdinand have announced that next February 9, 2018 will be released their awaited new album, the fifth of their career and the first one after FFS, the project they made with Sparks in 2015. Always Ascending (2018) has been recorded between RAK studios in London and Motorbass in Paris with the help of producer Philippe Zdar (half of Cassius who has collaborated with Phoenix, Two Door Cinema Club or Justice), will have 10 songs and will be published on CD, vinyl, and cassette limited edition. In addition, they have confirmed a European tour between February and March 2018 that will start in Paris on February 27 and will end on March 24 in the also French city of Caen, including a date in Spain on March 17 at La Riviera in Madrid.

Tickets for the gig of Madrid, which will be priced at € 35 (+fees), will go on sale in pre-order on Thursday, November 2 at 9:00 am on livenation.es, while general sale will start  on Friday, November 3 in Livenation, Ticketmaster and Ticketmaster ticket network (FNAC, Halcón Viajes & Carrefour) starting also at 09:00 am.