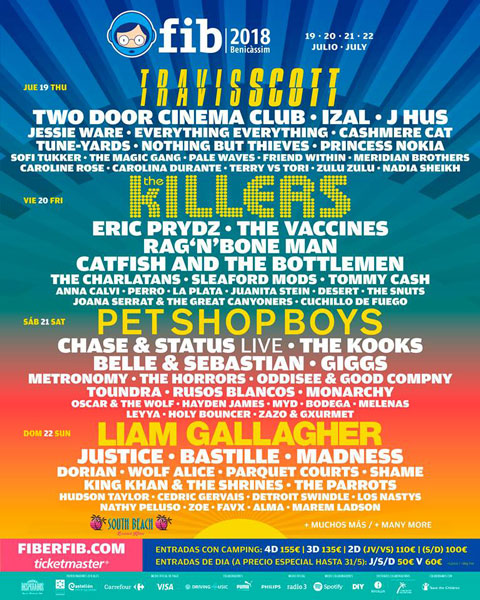 After announcing a huge part of their line-up over the last few months, organisation of Spanish Festival FIB 2018 has just announced the daily distribution by the day and has confirmed up to 27 new bands that join The Killers, Liam Gallagher, Travis Scott and Pet Shop Boys, among others, previously announced.

In this new batch highlights the presence of international bands as The Horrors, Chase & Status, Oscar & The Wolf, Monarchy or one of the sensations of the year as Giggs, in addition to Oddisee & Good Compny, King Khan & The Shrines, Detroit Swindle, Hayden James, Bodega, ALMA and Leyya. On the other hand, this new round of confirmations also includes a good number of Spanish bands led by the Madrid-based Toundra, and also includes Joana Serrat & the Great Canonyers, Perro, La Plata, Carolina Durante, The Parrots, Los Nastys, Holy Bouncer, The Snuts, Nadia Sheikh, Marem Ladson, Zazo & Gxurmet, Cuchillo de Fuego and FAVX.

Regarding the distribution by days, on Thursday 19th, Travis Scott, Two Door Cinema Club and Izal will be the main attractions; on Friday it will be the turn of The Killers, The Vaccines, Sleaford Mods or Catfish and the Bottlemen and on Saturday it will have the big names of Pet Shop Boys, The Kooks, Belle & Sebastian and the recently confirmed The Horrors or Toundra. On Sunday, Liam Gallagher, Justice, Bastille, Madness, Wolf Alice and Parquet Courts will be in charge of closing the festival.

4 days tickets for the festival, which will be held from the 19th to the 22nd of July at the usual location in Benicassim , are on sale at the official webiste of the festival with a price of €155 + fees (including campsite). Also, from today onwards you can buy day tickets for €50 (Thursday, Saturday and Sunday) or €60 (Friday).