The 21st edition of FIB intended to recover the attendance lost in recent years, because of the doubts that have spread about its celebration for some time. For it, this edition has been nourished with a lot of headliners and quite Spanish bands, trying to lure the patriotic public, because FIB festival will always be a foreigner Festival on Spanish land but it is never a bad idea to have some diversity.

Starting the festival we got to see Trajano! on the main stage, this year called Las Palmas. The Spaniards gave a good concert though the heat at the early hours of the afternoon did us suffer a little bit. A bit later we were warmed up with the great show of LA , who also join on stage Lourdes Hernandez (Russian Red), and then we move again to briefly enjoy Clean Bandit for a while, that beyond their hit "Rather be" little offered, so we checked out the Red Bull bus to see one of the sensations of the year. On the bus stage called this year Fibclub, we enjoyed DMA’s, the band that are named by a lot of magazines “the New Oasis”, although maybe they are a little bit far away from the Manchester icons. It’s true that we’ve enjoyed a quite enough correct show with brit pop songs that allow all the crowd (also non British people) to jump.  Seeing the 5 Australians filling the small bus, I wish to see how The Polyphonic Spree or Arcade Fire will rig on that scenario. 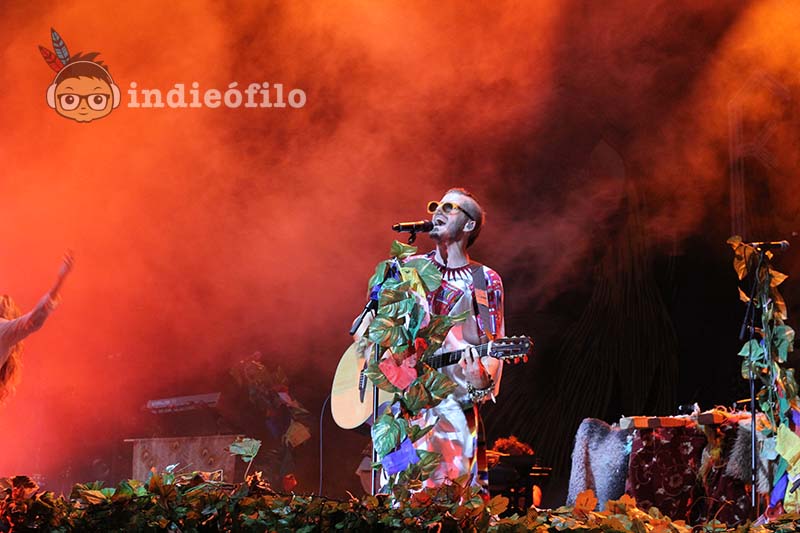 Night was falling and the main attractions of Thursday began with the good feeling that always transmit Crystal Fighters. With a jungle scenario, and much love to everyone their easy music, but here's no point in denying it effective, was a success. In summary, what else can we ask for, they never fail, they transmit you good vibes and you recharge your batteries for the rest of the day. The truth is that they seem to love the Mediterranean area because it is easy to find them every year in FIB, Arenal Sound Festival or Low Festival. After the British it was the turn to one of the shows I most wanted to, Florence + The Machine, and our luck making up for the disappointment of 2012,she didn't  let down. With an impeccable voice, Florence Welch presented her new album How Big, How Blue, How Beautiful, a much more powerful and less festive LP than their previous albums, offering as high point of the night "Ship to Wreck" and all her famous hits from her previous albums. While Elyella DJ's played, the night ended for us looking for rest, because three days were still ahead. 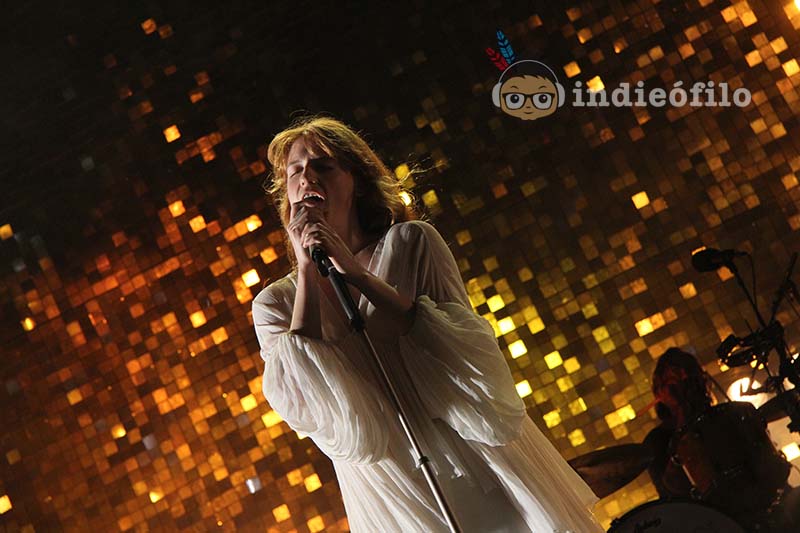 Friday was meant to be one of the great days of the festival, because on one hand we could listen to a myth as Noel Gallagher, while on the other side Prodigy had everything in their hands to bundle one big party rave that seemed epic. Our afternoon started with psychedelia of French Moodöid, who shone on stage, never better, dressed in some dresses that sparkled in the sun and bright glitter masks painted on their face. Within the music, great sound in which highlight the madness unleashed on the audience with "De folie pure". In the same Las Palmas scenario would play later pre pubescent British idol Jamie T that gathered to a majority of English young people who arrived to listen and adore the Londoner, who defended, as he could, his easy pop-rock for masses but does not feature of anything in special. 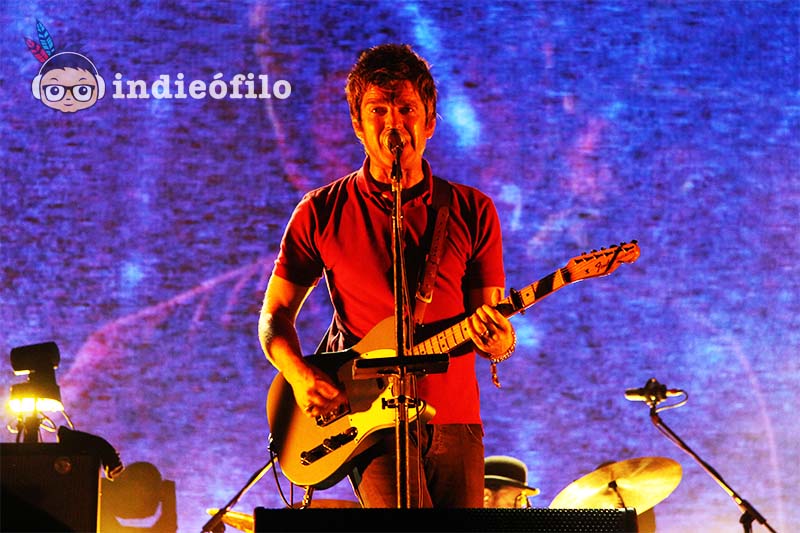 Late that night was time for one of the main attractions, Noel Gallagher's High Flying Birds, which like his concert at the Best Kept Secret Dutch Festival, began with many own songs to finish victorious with Oasis songs. Halfway through the concert, and upon the recommendation of our editor in chief Victor, I approached the Radio 3 stage some minutes to see Godspeed you! Black Emperor, but as Cast pearls before swine, I could not stand the infernal noise coming from the stage. To retrieve the auditory sensitivity I came back with Noel Gallagher which at that time began with "Champagne Supernova" and after some rather dispensable songs, just ended in a big way the concert with "Do not Look Back in Anger", to the delight of the many fans of Oasis in the audience.

After a short break it was time to dance and jump from the beginning with the electronic of The Prodigy (their absurd restriction with the number of photographers present in the pit had to give us some benefit) which keeping on classics like "Firestarter" or "Smack my bitch up" to sweep the main stage. The trio triumph against a little picky public which forgive them their latest failed works through the exchange of bass and beats that allow them with the massive intake of alcohol (and possibly some psychotropic) of the previous hours. The schedule caused that Polock had the handicap of coincide with The Prodigy, but when the ears were bruised and energy began to slack off, is truth that fast and easy to assimilate pop of Valencia's band is quite grateful.

The big day of the festival as far as names are concerned was undoubtedly on Saturday, with the British public waiting Blur and Kaiser Chiefs and the patriotic public for Los Planetas. Personally, my first desire of the day were national La M.O.D.A, as Spanish band was pleasantly surprise in San San Festival and I do not want to lose here against a less favorable crowd. The truth is that they did not disappoint and even attracted some foreigners surprised by its folk rock near Mumford & Sons, moving the audience with songs like "Nomadas" or "Los hijos de Johnny Cash". A little later was time for Kaiser Chiefs, who started strong with "The Angry Mob" and Ricky Wilson jokingly introducing some songs from their latest album. The last work of Leeds is hardly anything to write and that is also noted in a gig that decays with its songs, despite the typical antics of their leader, and only soars with their hits "Ruby", "Everyday I love you less and less" or a fantastic grand finale with "Oh my god". 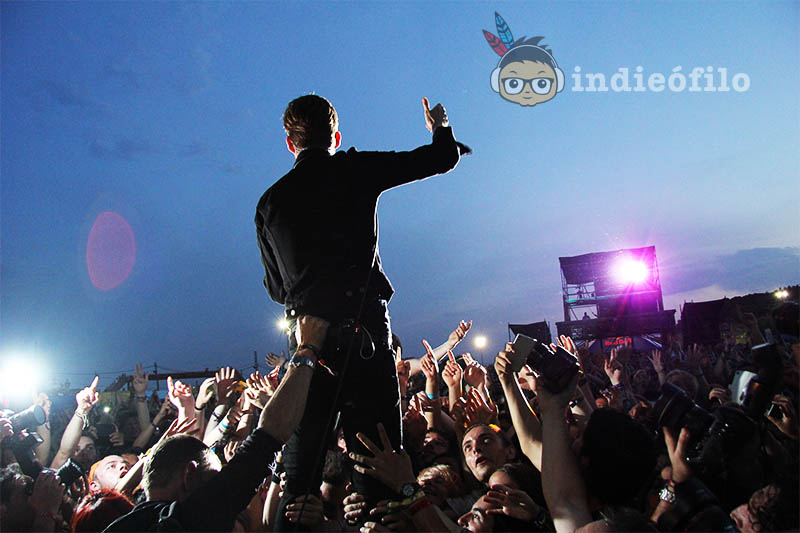 After them came the turn of Los Planetas, reference band of the Spanish indie movement than with their position in the lineup finally enjoy the place they deserved in the festival. Their fifth appearance in the Castellon festival was based on a masterful setlist that made drive crazy their fans, but will be remembered for eternity by the moment when footballer Gaizka Mendieta started to play the guitar with them in the mythical "Un Buen dia", in which the footballer is part of the lyrics. In the gap that existed between the two headliners on the main stage we approached to see in the Red Bull bus one of the most promising bands of British scene, The Death of Pop, that despite their name are responsible of dealing with a noisy pop of high carat. After the concert we can only say that will not be strange to see them in the future in a scenario of greater renown. 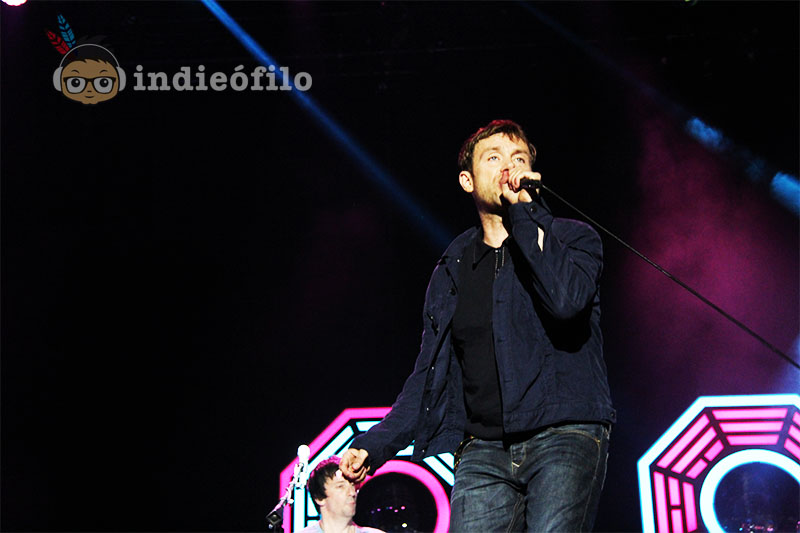 The closing night would be on a filled stage Las Palmas, where Blur undoubtedly offered the concert of the festival. Despite starting with "Go Out" from their latest album The Magic Whip, the concert was a comprehensive tour of their discography were they played "There's No Other Way", "Coffee & TV", "Beetlebum" or "Tender". By the moment when Damon Albarn took to the stage a fan to sing and dance with "Parklife" the crowd was almost exhausted, so a great encore with "Girls & Boys" and "The Universal" where we only miss "Country House", supposed the icing on one of those concerts that will remember in the future years.

In a final day marked by the fatigue of the previous days, the festival started for us with Public Enemy, who filled the stage of Radio 3 stage doing what they do best: Rap, critical and much strength in their songs over some spectacular bases. While Favor Flav was, at first, playing on stage with a skateboard like a Segway, Chuck D and specially DJ Lord on the turntables were great, reaching the summit point with "He Got Game", song that made the audience went mad. 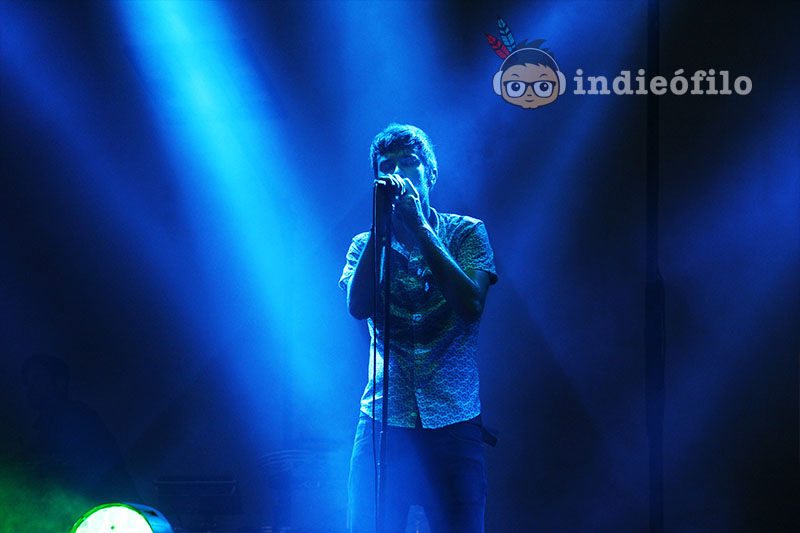 Halfway through the concert we went to the Las Palmas stage to enjoy Vetusta Morla, who debuted in the FIB, and the Madrilenians appreciated being in that scenario which has trained many big names, they gave a great show and the Spaniards gathered there sang all their songs. With almost no time to rest we returned to the Radio 3 stage (incomprehensible that did not have a hole in the main scenario) to listen to FFS, the group of Franz Ferdinand and Sparks. Throughout the festival he had been so crowded the Radio 3 stage, and the band offered a huge show that were opened with "Johnny Delusional", and later went interspersing songs of their collaboration album with mythic themes of Sparks and Franz Ferdinand as "When do I Get to Sing "My Way", "Take Me Out" or "Michael".

The end of the festival was arriving and we could not fail with Portishead, which in recent years have visited our country on many occasions offering master shows. People behaved, and you never know how they will accept in such mass Festival the intimate and emotional proposal of the band, probably mesmerized by such an emotional start with "Silence", "Mysterions" or "The Rip". Then came "Wandering Star", "Machine Gun" or "Roads", songs that closed a memorable concert as the ones that often made Bristol band. 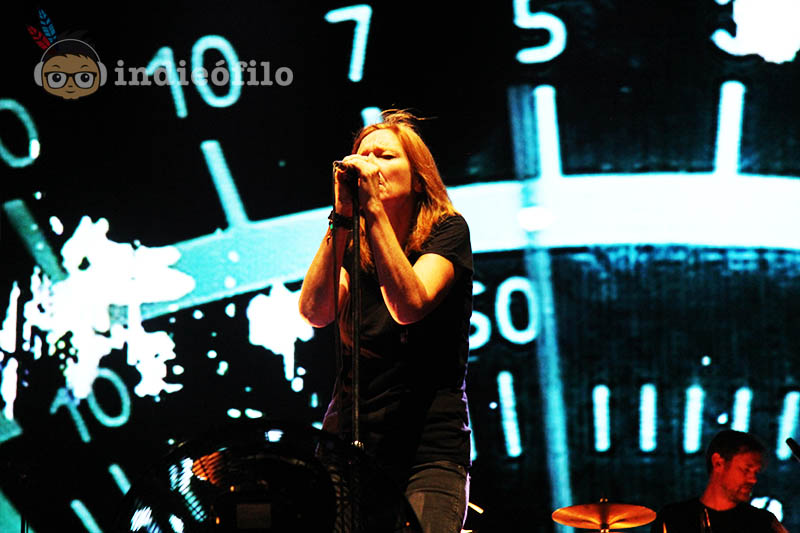 With the low energy that left to us we approach the multidisciplinary show which featured Joe Crepusculo that came out with Aaron Rux, a bartender making brews live, film director Nacho Vigalondo and flamenco singer Tomasito dancing like if there were no tomorrow and a hundred thousand other things that turned their concert in a show where unfortunately music went to the background. The festival ended for us with Bastille, with a somewhat bland show mainly due to the apathetic staging of the leader Dan Smith, who could not transmit to live the animated and optimistic proposal that have the British in their magnificent album Bad Blood.

So superb edition of a FIB that seems back on track after a couple of slack editions, having Blur, FFS and Los Planetas as absolute winners and where highlighted the large amount of notable concerts enjoyed during four days .. We can only count the days until it reaches the FIB 2016!!