After Red Hot Chili Peppers earthquake, FIB 2017 came to an end with a final day in which Kasabian concert stood out, which exerted of perfect headliner, but also stood out the energetic Slaves and where Love of Lesbian shown the high quality of the Spanish scene. 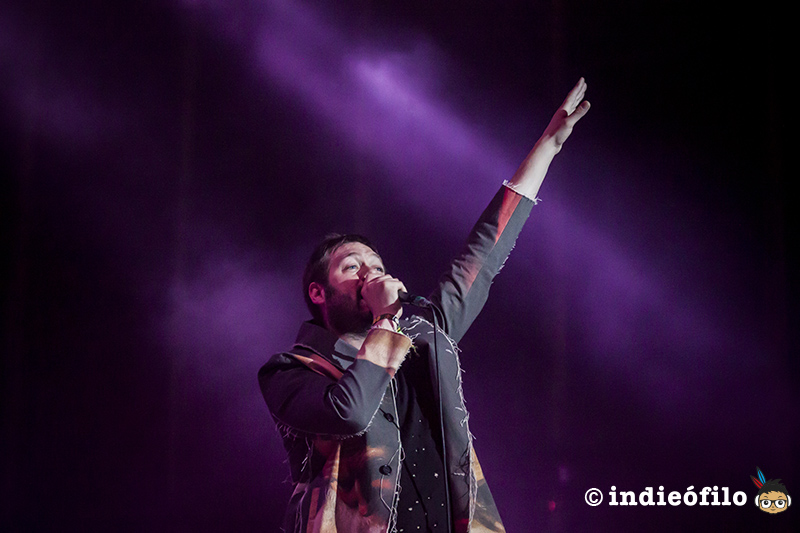 Tom Meighan, Kasabian – Photo made by Víctor Ramos for Indieófilo©

At our entrance to the festival we had in one of the overlaps of the day, perfect summary of what has been the typical disposable culture of the NME for new British musical aces.. On the main stage it was the time for the youngest Declan McKenna, who without a record published yet (will be released on July 21), achieved that all his compatriots filled up Las Palmas stage. Accompanied by a colorful band, his concert started a bit slow with "Isombard" as the only notable songs, a fact that did not seem to matter to a public that went crazy as in the last minutes sounded "The Kids Do not Wanna Come Home", "Humongous" or the summer "Brazil". Like his compatriots Blossoms days ago, good concert the one they gave for an emerging band, but.. Do they really need that fuss and fervor that turns every group with a couple of hits in the new Beatles? Despite the good fundamentals of the band from Hertfordshire, it will be necessary to follow their near future to see if it finishes in a mere temporary toy or, on the other side, they have a future full of main stages. 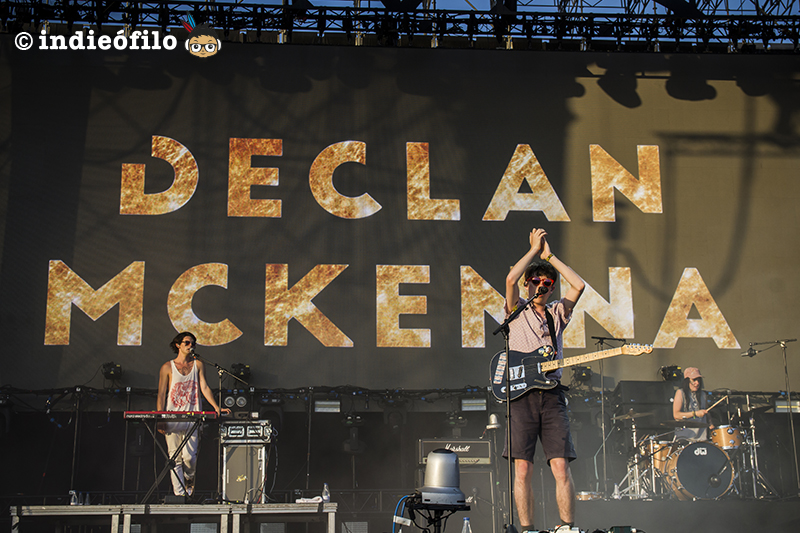 Declan McKenna – Photo made by Víctor Ramos for Indieófilo©

At the same point were in the middle of the last decade the Scots The View, possessors of a hypnotic pop-rock mix that took to the main scenes thanks to danceable songs with easy rhythms like “Wasted Little DJs”, “The Don" or "Same Jeans". And that was precisely what sounded before an infinitely smaller audience than the young Declan on the Visa stage, focusing their setlist on their two first LPs Hats Off to the Buskers (2007) and Which Bitch? (2009) and forgetting more recent songs. The band led by Kyle Falconer, who on this occasion appeared to be completely sober as opposed to that grotesque concert at the Summercase 2007 in Barcelona, may be the practical example that a poorly career can make you visit in a future scenarios with a smaller size than imagined after a brilliant start. 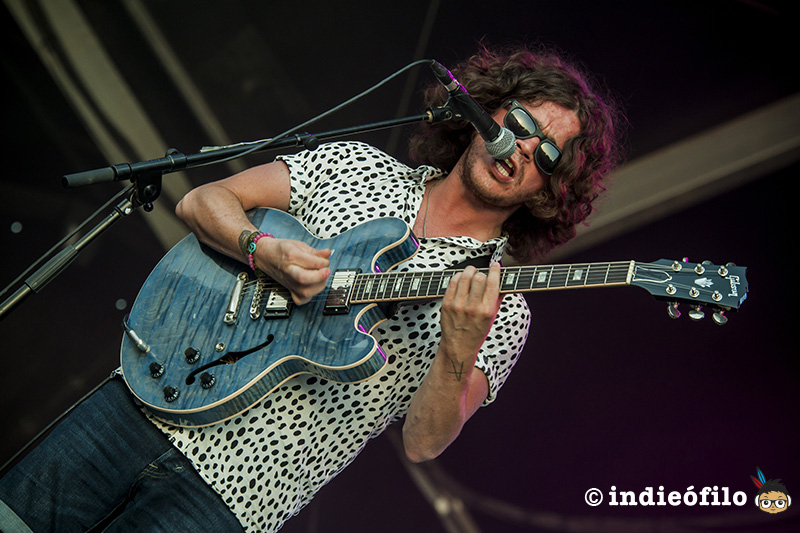 Kyle Falconer, The View – Photo made by Víctor Ramos for Indieófilo©

Quite the opposite could be pointed to the duo of Kent Slaves, who based on work and attitude turned the same stage upside down as it began to dusk. His punk-rock-garage, which at times looks like the perfect fusion of their compatriots Sleaford Mods with Royal Blood, conquered a scenario that gradually was filled with people as their concert progressed. Among songs of their two albums released, the best would come in a final where we went crazy with "Beauty Quest" and "The Hunter". 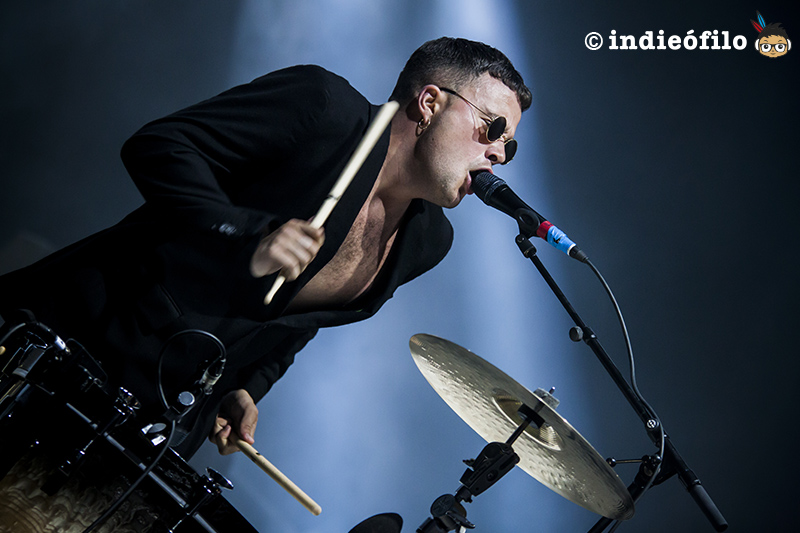 Isaac Holman, Slaves – Photo made by Víctor Ramos for Indieófilo©

While the main stage continued with its pro-teenagers schedule, the Visa scenario brought us more amazing concerts one after another, being this time the responsibles of it the Catalans Love of Lesbian. How is it possible that a band that everyone says they have seen a lot of times, and even hated, can fill the stage and turn it into a party where everyone sings and dances? Perhaps because many of the clichés and fashions prevent some people saying out loud that what Santi Balmes and company do live is difficult to overcome today on the Spanish scene.. With a setlist similar to the one they played last year in Cruilla 2016, hits of all their discography were mixed perfectly with songs from their latest album El poeta Halley (2016), with a rhythm and quality such that they created a steamroller capable of produce the same atmosphere with “Cuando no me ves” or “Bajo el volcán” as with the well-known “Algunas plantas” or “Club de fans de John Boy”. It still does not convince us that end with extra psychedelic style on "Planeador", but it is only a small blur in an outstanding concert. 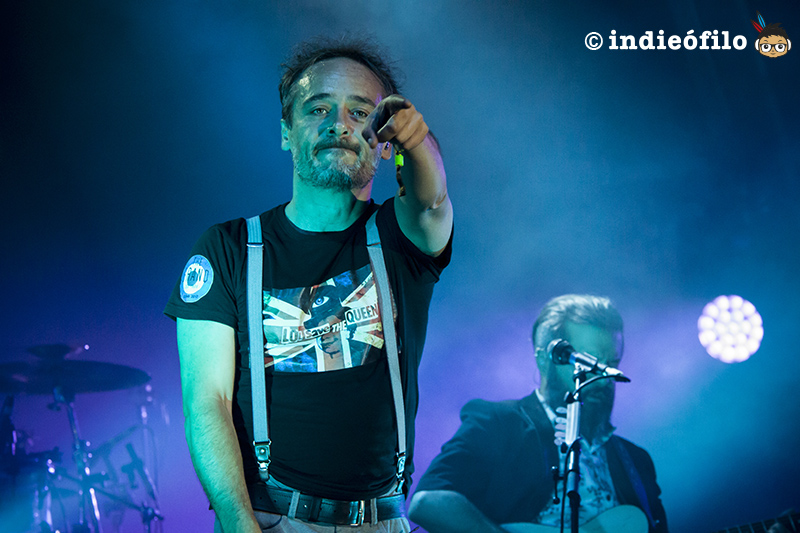 Santi Balmes, Love of Lesbian – Photo made by Víctor Ramos for Indieófilo©

After four intense days, this edition of the FIB was to end for us with the concert of the band of Leicester Kasabian, who before a grown crowd gave a concert full of rhythm and hits. After the small stumbles of Velociraptor! (2011) and 48:13 (2014), their new album For Crying Out Loud (2017) seems to have given them wings again recovering that immediacy of their beginnings, reminding us to that band that marveled us in its debut at the festival with that majestic show with which they closed the main stage of the festival in 2005. After a somewhat hesitant start, the machinery began to move suddenly with the concatenation of "Eez-Eh", "Underdog", "Shoot the Runner" and the most recent "You're in Love With a Psycho", starting then to a totally different concert, with a much more visible Sergio Pizzorno. With six records behind them, the second part of the concert was a tireless drip of hits that made us enjoy ourselves as pigs in the mud of 45 great minutes, in which they played "Club Foot", "Re-Wired", "Treat" , "Empire", "Stevie" or "LSF (Lost Souls Forever)", demonstrating between electronic lights and rhythms all the force of which the band of Tom Meighan are able. There was still time of a few accelerated encores that started with "Comeback Kid", who deserves of a spot in the altars of British hits with that hypnotic trumpet, to close later the concert with "Vlad the Impaler" and "Fire", proven that between all the bands included under the label of new brit of the last decade, Kasabian are the band who better has grow old.. 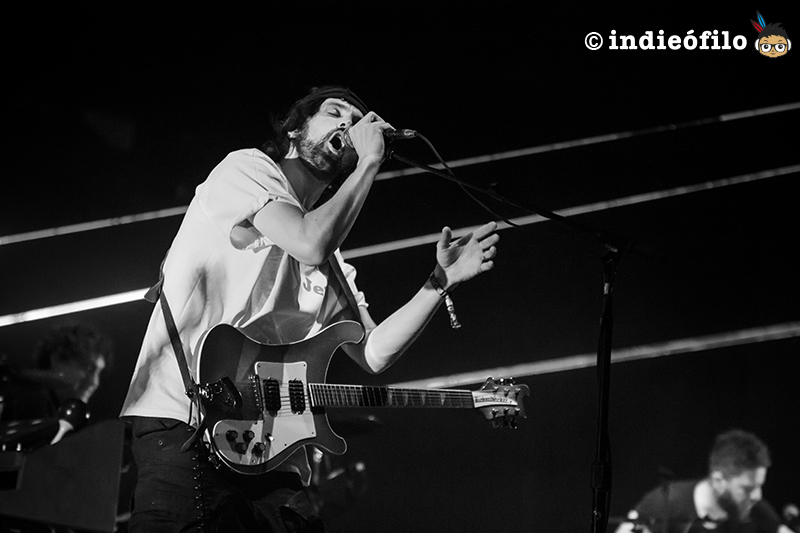 Sergio Pizzorno, Kasabian – Photo made by Víctor Ramos for Indieófilo©

So, an excellent end for an FIB 2017 that returned to the big numbers after a few years below the level reached in the middle of 00, and that confirms it again as one of the references festival in Spain. On the musical side,  this will be remembered in years to come as the year of Red Hot Chili Peppers, although the show of the Americans was not as perfect as expected, and also for the year in which Spanish band Los Planetas performed on a primetime schedule on the main stage. However, if we had to make a small list of the most outstanding performances for us, we saved the shows of Biffy Clyro, Kasabian, Slaves or Bonobo, while Spanish bands offered a high level of the hand of Viva Suecia, Belako, Joe Crepúsculo or Love of Lesbian, although the great winner was undoubtedly Mala Rodriguez with a superlative concert.