After the first day marked by the spectacular stage of The Weekend and the performances of Belako and Viva Suecia, FIB 2017 presented on its second day its most equitable line-up, without the presence of a big headliner, but with names of the size of Foals, Temples or Blossoms, besides a great presence of Spanish bands thanks to Los Planetas, Joe Crepúsculo or Mourn. 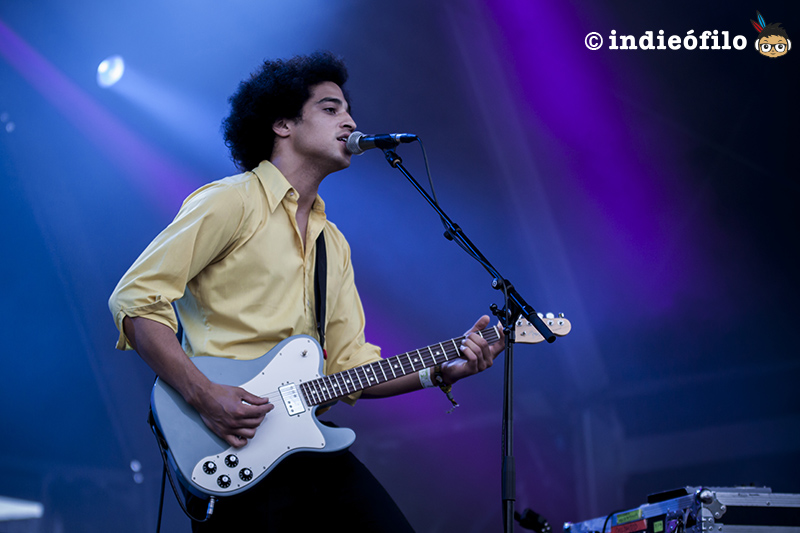 Childhood – Photo made by Víctor Ramos for Indieófilo©

Before a threatening sky in the form of rain, the British Childhood welcomed us with their mixture of indie pop-rock. Their show was too linear in spite of the attempts to give prominence to synthesizers and trumpets, although as soon as they turned towards more tropical rhythms we were able to enjoy small quality pills in songs like "California Light". For the memory will be the speech of singer Ben Romans-Hopcraft counting the old stories who had lived as public at the festival in the past.. 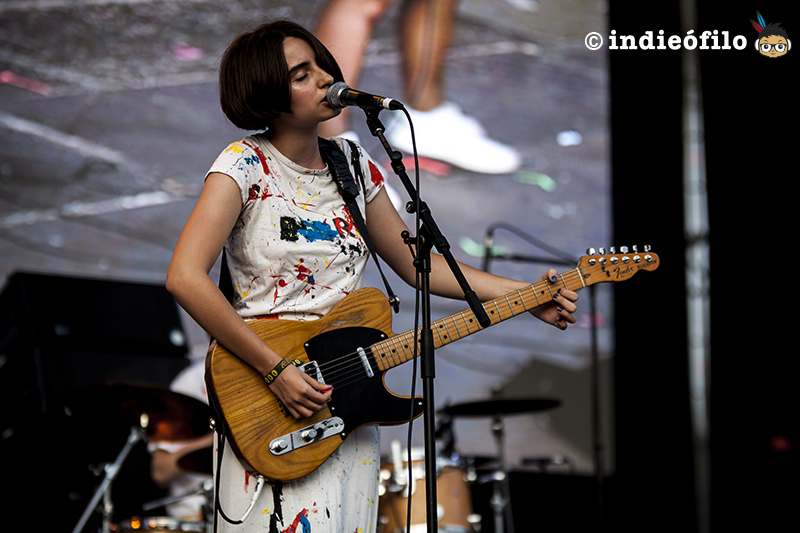 Mourn – Photo made by Víctor Ramos for Indieófilo©

Few meters away, on the Las Palmas stage, the Catalans Mourn surprised with their garage rock all the British who were starting to get crowded to get a good place to enjoy later Blossoms. The young band had won the audience since the first minute thanks to the power and the immediacy of their songs, with the voices of Jazz Rodriguez and Carla Pérez mixing perfectly with the incredible rhythms of the drummer Antonio Postius in songs like "Evil Dead", "Misery Factor" and especially "Howard", much more forceful in its live version. The label of band with great future have became small, and we can affirm without any flush that Mourn currently enjoy an enviable present. 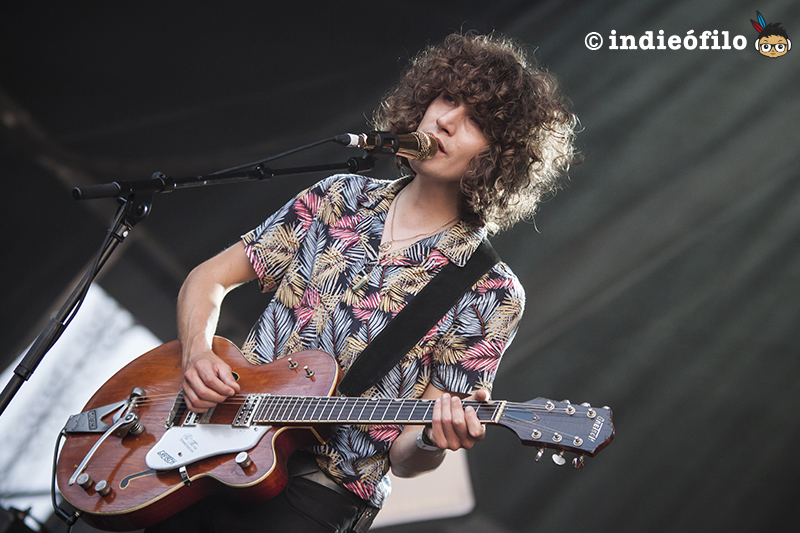 Temples – Photo made by Víctor Ramos for Indieófilo©

Very quickly because of the coincidence of schedules, we headed towards the Visa stage where Temples demonstrated a chameleonic evolution that has gradually moved them away from the psychedelia of their beginnings. And despite this, along with the Dutch Pauw and the Australians King Lizard and the gizzard wizard, they are still one of the bands referring to the movement, as could be seen live with temazos like "Shelter Song" or "Mystery of Pop". There was also time for small incursions in electronics from the hand of their new album Volcano (2017), which showed us the amazing sonic wealth of the British, corroborating why the English are one of the bands with a best live performance nowadays. 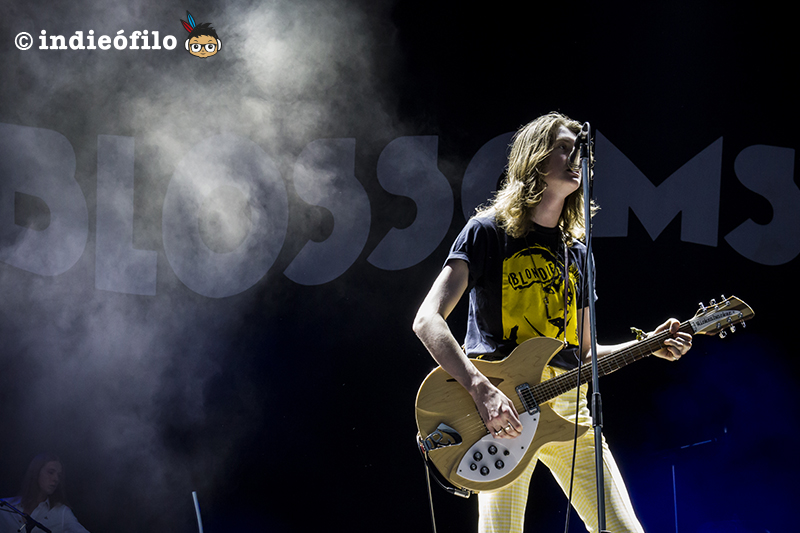 Although about the recognition of the public, their countrymen Blossoms, that with a single album have quickly risen like the new "Arctic Monkeys". We already know how easy the English create and destroy myths to the rhythm of NME covers, but it is also true that the band led by Tom Ogden offered a show that went from less to more, overcoming the initial sound problems in "Texia" and "Getaway". The madness experienced in the first rows with their version of Wham's "Last Christmas", and above all with their mega hit "Charlemagne" show that they have the absolute goodwill of the teenager audience. Until when? Will they overcome the syndrome of the second album?. 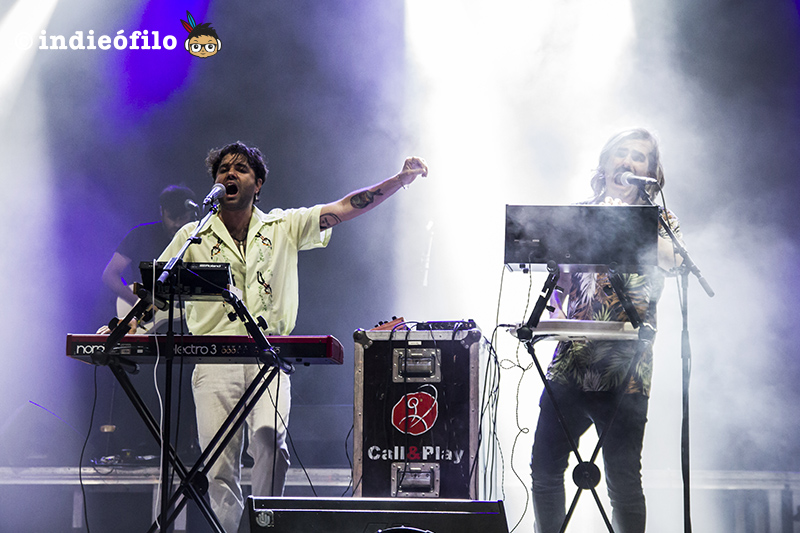 Just a few feet away, the entire Spanish audience was enjoying the mega party that Joe Crepusculo and friends gave on the Visa stage. Presenting his new LP Disco Duro (2017), and with a similar staging that the one we could enjoy a few months ago in Barcelona, the guy from Sant Joan Despi was accompanied by Aaron Rux, Sergio and Luciana from Svper, Tomasito, Alacrán (Alter ego of film director Nacho Vigalondo) and even a cocktail maker to unleash the madness in the form of dance in a scenario where he has played repeatedly in recent years. With an incredible Alacrán-Tomasito dance duel throughout the concert, the songs of Catalan discography were falling one after another, such as “Ritmo mágico”, “La Canción de tu Vida”, “Pisciburguer”, “Música para adultos”, “Tus Cosas Buenas” or “Suena brillante”, getting even the British audience that gradually came on stage to dance. It is clear that if you want a PARTY at your festival, Joe is the person to command it.. 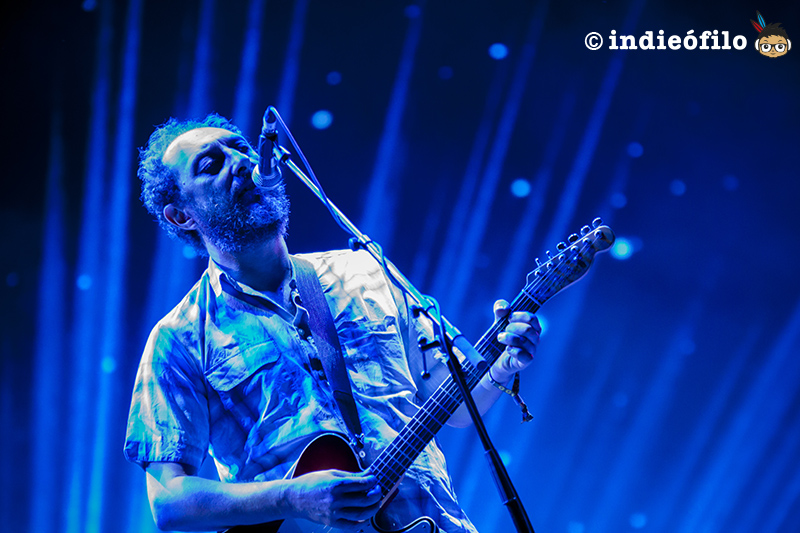 Los Planetas – Photo made by Víctor Ramos for Indieófilo©

Although if we have find a great enticement for the Spanish public, the absolute protagonists of the night were Los Planetas, band that already acted in the first edition of the festival back in 1995. It can be argued if a main stage crowded with Brits waiting for Foals without any focus on the concert is the best environment to enjoy the band from Granada, but in our opinion, the visibility and recognition of a national Spanish band in prime time at a festival with a big name as FIB was way over all the drawbacks. With a beginning focused mainly on their last album Zona Tempora Autónoma (2017), it would not be until “Santos que yo te pinte” when the concert finally started with force, as we would later observe with the concatenation of “Segundo premio”, “Pesadilla en el parque de atracciones” and “Un buen día”. After an incomprehensible break of more than two minutes, there was still time for a couple of encores that ended with "Alegrías del incendio", fused for about 30 seconds with some stanzas of the "Soy gitano" by Camarón, which left us a good impression despite they haven’t played any song from Super 8 (1994) and Pop (1996), leaving us with the feeling of not having lived a perfect show as we enjoyed in their recent tour in Barcelona and Valencia. 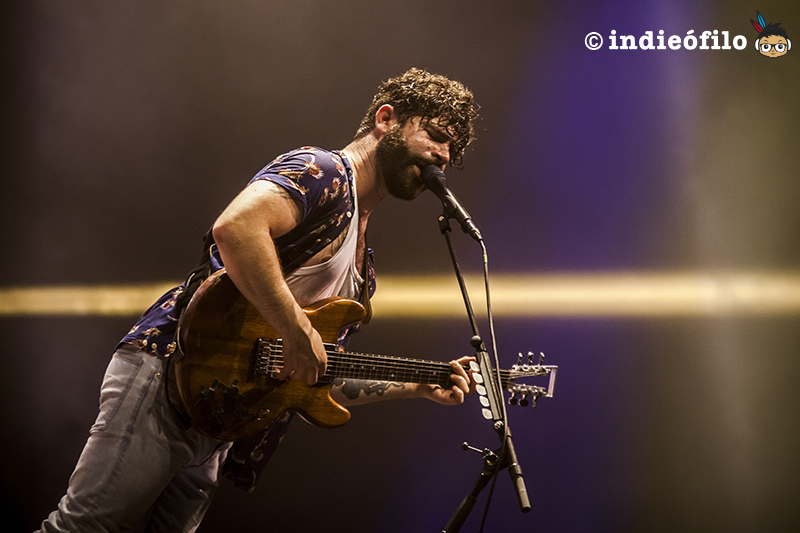 Foals – Photo made by Víctor Ramos for Indieófilo©

If there was a headliner on an equitable day as Friday those were the British Foals, who came to Benicassim as part of the presentation tour of their latest album What Went Down (2015), which we already enjoyed a year ago in Amsterdam. After starting full of strength with "Mountain at My Gates" and "Snake Oil", their show was gradually falling in intensity until their hit "My Number", which raised again the mood of an audience mostly British. Despite the good sound as a band, the show did not jelled in its total, and only the last 15 minutes where "Inhaler", "What Went Down" and "Two Steps, Twice" sounded, showed us the strength that usually accompanies the concerts of the band of Oxford.